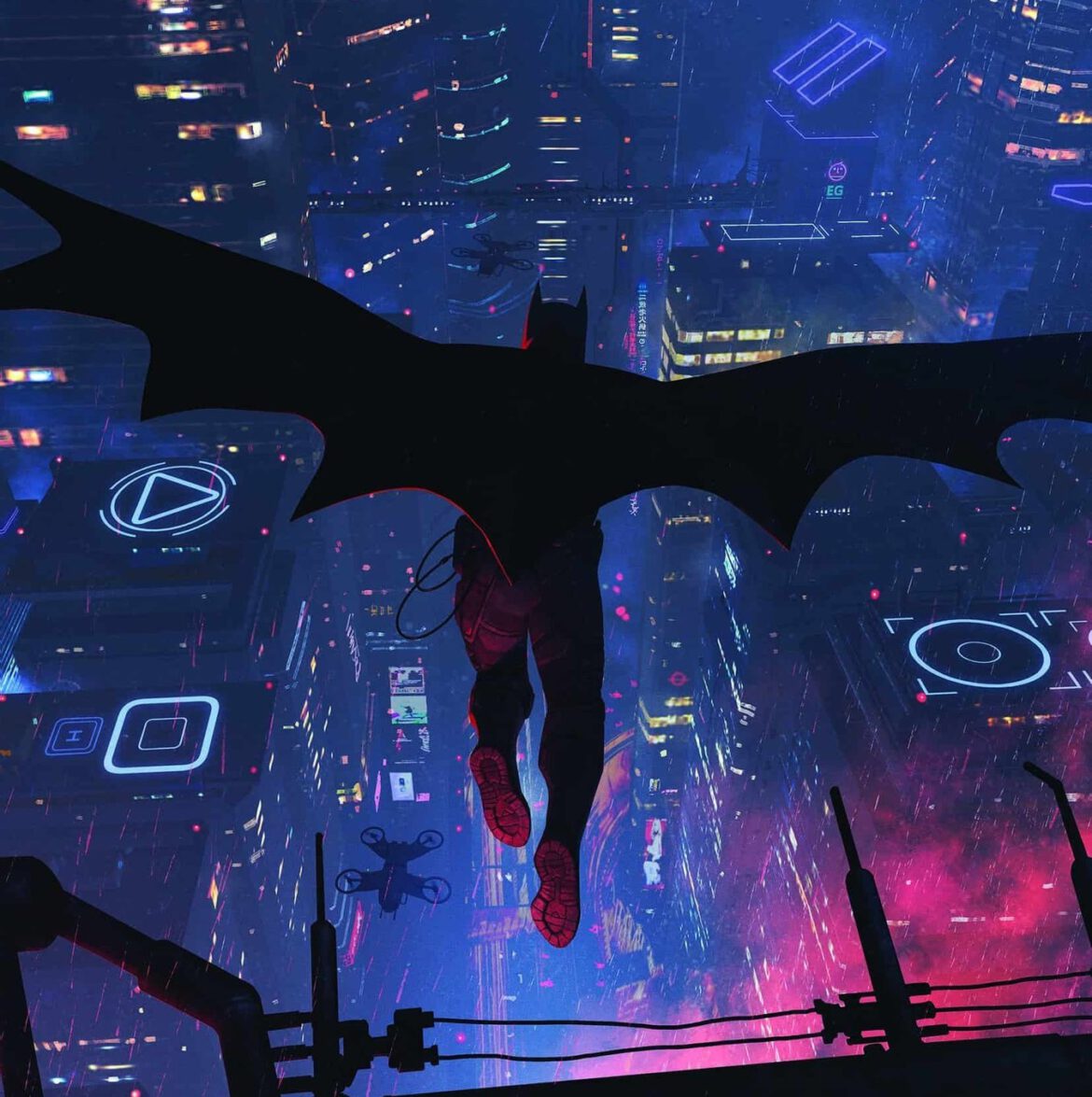 Overview: DC presents a collection of stories looking at the potential future for Gotham City and its famed heroes.

Story #1: “The Next Batman” by writer John Ridley and artist Nick Derington

Synopsis (spoilers Ahead): A masked thug runs through an alley carrying giant knives. He’s accosted by Batman, who quickly disarms him and takes him out. As the perp falls to the ground, Batman is confronted by two officers of the GCPD, who attempt to arrest him. Batman gets away as the cops realize he’s captured a wanted serial rapist. Batman looks over the city and realizes that he shouldn’t look at himself as a fill-in. He is Batman and Gotham City is his city to protect.

In Little Santa Prisca, the Bane-Lito gang is holding initiation. Nestor and Eddie – brothers – are looking for protection by joining, and Rico is giving them the pitch. To join in is simple. All they need to do is man up and blood in. Rico hands them a gun and a couple of Bane masks.

Following the advice of his mom, Luke Fox visits a Gotham hospital to visit his sister, Tam. As he walks in, he finds that she already has a visitor – his brother Tim. They argue over Tim’s presence. Tim – who refers to himself as Jace – has had enough and decides to leave. Luke is left alone with Tam, hoping that his unconscious sister did not hear the altercation between her brothers.

Detective Chubbs pays her former partner, Whittaker, as he takes in some practice swings. She misses him and remembers him as being friendly to the masked vigilantes in the city and questions him about a rumor of an ex-cop who might be helping the other side in doing one last job. Whittaker brushes her off.

The Bane-Litos are driving through Hype territory when they recognize a Hype strolling alone down a street. Rico tells the brothers Nestor and Eddie to mask up and prepare to complete their initiation. As they approach, Nestor takes aim, but is disrupted by his brother as he fires, missing the intended target. They turn their vehicle to run the fleeing guy over but are stopped by Batman. They crash. As Nestor and Eddie take off, Batman disarms Rico and the Bane-Lito driver.

Batman eventually catches up with the brothers, asking them to give up before the Peacekeepers arrive. Nestor urges Eddie to shoot Batman, saying it will allow them into the gang. Eddie turns the gun over to Batman right as the Peacekeepers arrive. The Peacekeepers begin firing at the three masked beings. Batman uses a smoke bomb to get himself and the two brothers out of harm’s way. With no deaths, Batman sees it as a good night. Will it last?

Analysis: The first issue of Ridley’s Batman had the potential to be great. Instead, it turned out just being good. Several things lead to this in my opinion – the most important one being build. Unlike the two stories that followed there’s no build or development of the lead character. There was one panel of Tim Fox in the pages of James Tynion’s Batman before Future State. Most readers have never heard of Tim Fox before this. This takes a lot out of the story, especially as Ridley doesn’t show that Tim is the one under the mantle. I’m not certain if the final product of this first issue was heavily influenced by DC editorial or not, but I firmly hope that the next issue will be stronger than this. Being the main story, it should be the strongest. Unfortunately, while still a decent story, it’s far from the strongest.

What can be said about Nick Derington’s art that hasn’t been said before. It is great. The colors provided only enhance the greatness of it. If there is any distraction to the art, it was the weakness of the story. However, there is no doubt that Derington’s art is the strongest part of this story.

Synopsis (spoilers ahead): A police chase makes its way onto the Tri-Gate Bridge as Duke Thomas races to reach a barricade set across the lanes. As he and his passengers jump the barrier, a Peacekeeper gives chase as his partner attempts to stop him from going outside of their jurisdiction. They’re confronted by Katana who chases back across the barricade. After ensuring Duke and the passengers were safe and headed to a safe house, Katana goes to investigate rumors that the Magistrate has infiltrated the area she has been protecting.

Tatsu finds an abandoned building and, after taking out multiple Peacekeepers, comes face-to-face with the former fellow partner Kaliber who, after receiving some upgrades, is now working with the Magistrate. The two battle back and forth before Kaliber gets the upper hand with the arrival of more Peacekeepers. Before he can make a final blow against the downed Katana, a bolt of black lightning strikes the ground, taking out Kaliber and the Peacekeepers. The Peacekeepers grab the fallen Kaliber and take off in a van, leaving the battered Katana alone.

The Magistrate has planted a spy amongst the group Duke has rescued.

Analysis: So, let me just say this here and now… of the three stories this issue, this was my favorite. I reviewed Batman and the Outsiders for TBU for a while, and I was not a fan of it at all. Brandon Thomas, however, has drawn me back in with a very good story with three very interesting characters. We have Katana who, throughout the issue, has a consistent conversation with her dead husband whose soul is trapped in the Soultaker katana, which looks quite different than last seen. What’s behind her enhanced abilities? Speaking of abilities, we’re also introduced to a new Black Lightning, who has taken on a new form since his interaction with Ra’s al Ghul’s alien tech device in Bryan Hill’s Outsiders run. Is he truly cursed as Tatsu claims him to be? For the first time ever, I find myself interested in the Duke Thomas storyline. Those who know me on social media and our Discord server know that I have never been a fan of the character known as the Signal. And while that continues to be the case, I am interested to see where this story is going. Who could the Magistrate plant be and how can the reveal affect Duke?

While this is my favorite story from a story aspect, it’s my least favorite art-wise. This style of art is still growing on me as a long-time comic reader. My appreciation is growing by the day, however.

Synopsis (spoilers ahead): In the Wastelands area of Gotham, four masked individuals take down a Magistrate drone. Before they’re able to get away, Peacekeepers arrive, ready to dish out quick punishment. They’re attacked, however, by a group of former inmates of Arkham Asylum led by Astrid Arkham – the Arkham Knight. As they look to avoid the Peacekeepers, they are also looking for another target, and it’s on the move under the streets of Gotham. As the Peacekeepers move in on them, the former Arkhamites, including Victor Zsasz, Clayface, Dr. Phosphorus, and Two-Face, follow their leader into the sewers of Gotham where they find their target – Killer Croc – who’s being attacked by Magistrate drones. Astrid and the Knights of Arkham rescue the injured Croc and bring him to their base of operation – the place formerly known as Wayne Manor.

As Croc heals in stasis, Astrid goes and does her best to comfort Dr. Phosphorus, whose radiation continues to worsen and kill him. She promises her soldier that they will find a cure.

Analysis: So, Astrid Arkham has returned to the Batman Universe. She hasn’t been seen since her one and only arc in the pages of Detective Comics during Peter Tomasi’s run. Of the three stories in this issue, this is the one that is linked the closest to its previous arc. We find the same Arkhamites following Astrid’s lead. We see her with her same mission – raising the “sun” over the streets of Gotham. And she plans to do it with the weirdest set of knights an army could gather – members of Batman’s rogues’ gallery. It will be interesting to see what/who the next primary target will be as it appears that she is building her army from amongst Batman’s rogues. And it’s obvious that they’re not all on board with each other, particularly Zsasz and Two-Face. Are they destined to come to blows?

I had zero interest in Astrid Arkham as of her reveal in the pages of Detective Comics. Jenkins’ story changes that.

Wow. I absolutely love the art from Jack Herbert. This is by far the best of the issue for me. Perhaps it is my love for the house-style of art at DC (yeah, it is), but the linework and the colors that laid on top of the pencils and inks is absolutely stunning. I love it. It’s crazy that Herbert hasn’t had more work than he has had at DC, but I am hopeful that this is a sign that we will be seeing more of him in the future.

Future State: The Next Batman #1

This was a decent beginning overall. Ridley's story had a slow start but shows signs of promise. Jenkins has done a really good take on the Arkham Knight that Peter Tomasi could not achieve in his arc in Detective Comics. Brandon Thomas, however, gets the gold star of the issue as he has me interested in a Duke Thomas story. This is something previous writers have never been able to accomplish.