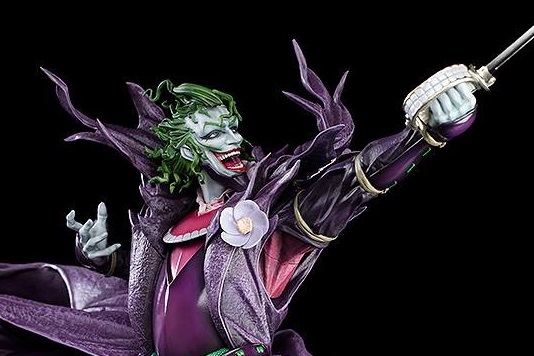 Good Smile Company has announced pre-orders are available for their latest statue based on the Batman Ninja animated film.  The 1/6 scale Sengoku Joker statue serves as a companion piece to the Sengoku Batman statue also in the “Takashi Okazaki” version.  Standing seventeen and a half inches high, this statue is cast in a mix of polystone, PVC, and polyurethane. The statue is expected to release in October 2019 and is priced at 117,800 Yen (roughly $1,072). You can pre-order directly by heading over to our friends over at Entertainment Earth.

From the animated film “Batman Ninja” comes a 1/6th scale statue of Joker. The statue is based on an original art piece by the series’ character designer, Takashi Okazaki, and will be limited to 1000 pieces worldwide.

His unbalanced pose holding his sword has been dynamically recreated. The texture of his armor has been carefully sculpted using real armor as a reference. The hem of his flapping cape has also been textured in detail for an impressive appearance even from close-up.

The base of the figure is designed to look like a broken roof, with Joker moving on perilous footing. This statue can be displayed with “Batman Ninja: TAKASHI OKAZAKI Ver.” to recreate a scene of the pair facing off.

Sengoku Joker: TAKASHI OKAZAKI Ver. is a high-quality art piece, and only 1000 will be made available worldwide. Each product will be engraved with a unique serial number. (Serial numbers will be distributed at random. You cannot select which number you will receive.)