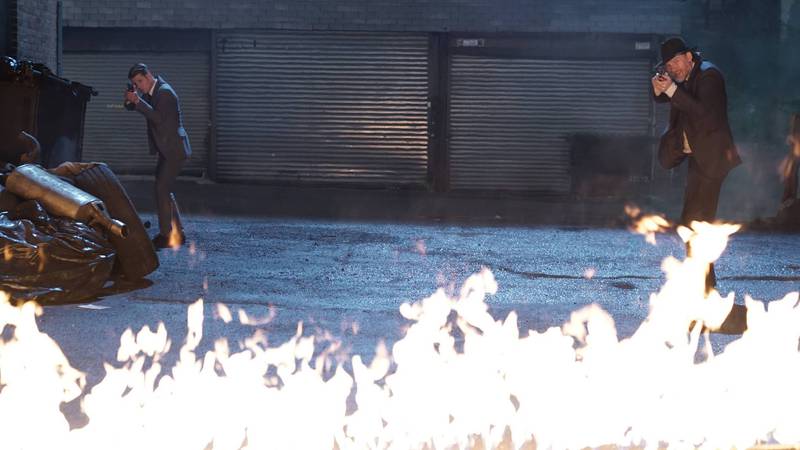 You’re welcome, readers. I willfully skipped Monday Night Foo-nah, just joking with you. I DID see the Star Wars trailer, and boy was it mediocre. For all the hype, it merely rehashed the previous trailers but added extra cheesy nostalgia. Some guy in a mask says he’s finishing what Vader started—even though Vader started nothing, Palpetine did, and Vader was the most important chess piece to end the empire. Not sure what he started there, but we’ll take the cliché line because your lightsaber looks awesome! It took Han about 40 years, but he finally realizes the hocus pocus stuff he dissed in New Hope is “all reals, dude.” Ok, that was paraphrasing, but same basic principle. I don’t give a hoot (beware the Court of Owls…) about nostalgic old people, but that’s just my opinion.

Now that the Disney rant is over, let’s get to the good stuff: last night’s episode of GOTHAM!! I had to look up the title of this episode seven times, but I finally remembered it, by copying and pasting. Ah, the internet. Turns out it’s a real word too! 1. “to make scratches on or superficial incisions in the skin, as a traditional cosmetic practice in some cultures or as a medical procedure.” 2. “to make somebody afraid or alarmed.” Huh. Quite interesting.

Watching trailers for this episode, I was psyched, especially to see the flame-throwing villain out on the streets. Since the early death of the Maniax (I thought Theo had more in store for them) and the formation of the Strike Force, I was worried Gotham would be nearly devoid of cool villains other than rich guys with guns. But boy did I smell improvement this week. Whatever they were smoking when they wrote the final draft of last week’s script was doused by the time they hit this one. Some of the storylines are still running that I think don’t work, but one of them has been all but justified. Read on to see which one made the cut:

Nygma and Kringle have a double date with Leslie and Jim. The scene was shorter than I expected after seeing the trailer, but sheesh…what was I supposed to expect? Nothing shitty happened for once, it was a nice, adorable scene to just enjoy.

Theo asks Gordon for his endorsement in running for mayor (odd given the fact there are no other living candidates) and Gordon refuses, until the end of the episode that is, after (spoilers) the Strike Force loses a member and becomes emotional.

Selina played a big part in this episode with her female empowerment speech to her friend, Bridgit, who was pushed around by her “family” who is in the arson business. When Theo employs Penguin to burn wealthy buildings to the ground, Penguin sends Butch and Selina to the arsonists for the task. During a highly illegal shopping trip, Gordon breaks in and shuts the place down, accidentally blowing up one of the arsonists. The survivors shanghaied Bridgit into service to replace the fallen man, causing injury to her and outrage from Selina. Before she can burn her last building, Gordon tries to shut the operation down, and she accidentally burns one of the Strike Force members alive. Selina helps her escape.

Penguin figures out that Theo Gallavan actually is a descendant of the family that was scandalized by the Waynes, tore the family down, forcing them to change their name and go into hiding. While Penguin sends poor Butch behind enemy lines, Theo welcomes the brotherhood of something or other who are coming to Gotham to cleanse (aka purge) it. It has been confirmed Azrael is coming, so expect him to appear first in diapers.

The storyline that actually turned out ok this week that I hated last week? The Strike Force. Yep, they’re actually a pretty swell idea when they’re not doing stupid things like trying to take down Penguin but focusing on arsonists instead. They also lost a member; I thought they’d last longer after how they handled Zsasz (although COME ON, he was slacking as heck last week).

There was humor (screw you to those who say DC is humorless). There was a lot of it, found in our new Captain and Harvey. (His hardy har har had me in stitches. Not because he said it, but HOW he said it.) The humor was excellent and unforced.

Penguin got a freaking cool plan on Theo that I’m dying to see next week and beyond. He’ll get his mother back; and his performance as a crazy, paranoid guy on the cliff’s edge was not only convincing to his enemies, but to the audience as well. He’s back, and he’s gonna make Theo suffer.

Selina played a great role helping Bridgit get out of her predicament. While I’m not a fan of today’s “feminists,” Selina was right in this case. Bridget was being persecuted and had to do something about it. We’ll see if this goes anywhere or if Selina just got her away from the cops.

No Barbara, no Bruce. No characters shoved into other peoples’ episodes this season. It’s a refreshing way to go about things. Also, there were Fish references…if, when she’s back…why can’t anyone stay dead? She’s dead. Right? Right…

We got an interesting look at Gotham history. I love Gotham history. It’s one of the reasons I pounced on this show from the day it was announced with joy; I’m seeing some creative takes on its history every week!

Ok, Penguin may be distracted, but he’s not stupid. He’s not Obama; getting the top chair for the hell of it without knowing what to do when he gets there. He knew damn well what the top spot Falcone had entailed, so he shouldn’t stand for the GCPD (with about half its force gunned down by a kid a few weeks ago) stealing his money.

The way the Strike Force member died was LAUGHABLE. Not funny, but sadly LAUGHABLE. I mean, a highly trained, armed young man of 240 pounds can’t knock down a 100 pound girl who doesn’t know what the hell to do in a fight, who’s off balance with a large flame thrower, and he hugs her like mommy and let’s her accidentally set him on fire? The stunt coordination there was TERRIBLE. I’m going to write to them about that one. Go watch it yourself, I’m not saying women are weak, I’m saying a five year old with a balloon could resist this guy. How’d he make this team?!

Overall, this episode improved, and was highly enjoyable regardless of what came before or what will follow, but carries along the burden of the couple storylines introduced last week that just don’t work right now.