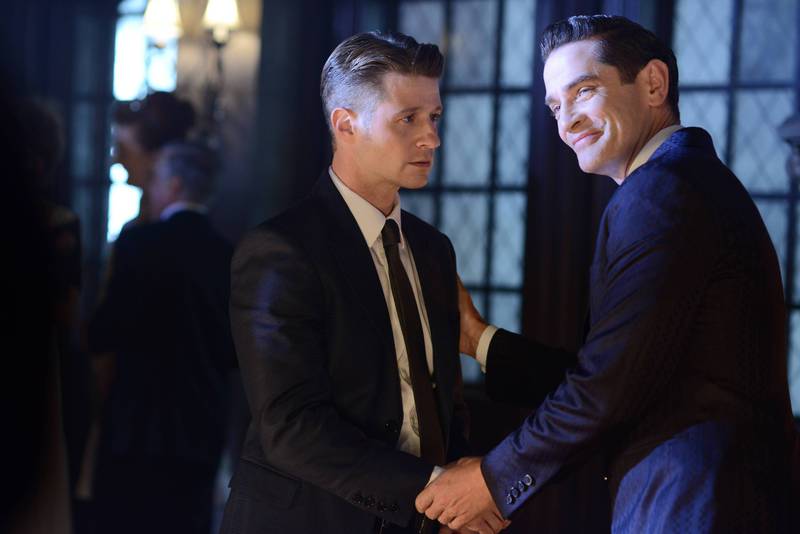 Oh boy, I can’t say enough about this episode! For the first time since Penguin’s Umbrella (Series 1) I flat out enjoyed an episode that blew me away! Read on to see if it can make the ever-coveted perfect aced rating!

The GCPD and new mayor, Theo Galavan gang up martial law style in their joint enterprise to drive the Penguin off the power seat of Gotham. Butch leads Penguin into a trap with Oswald’s mother, and betrays Penguin just in time to watch Theo’s sister murder Penguin’s mother. (whew) and (OMG SHE’S DEAD!!) That was the most heart-wrenching event this series by far. I honestly thought Penguin would walk out of there with his mother.

Following the (accidental) death of his girlfriend, Nygma wakes up to learn that his confident, evil(er) half hijacked his body last night and hid his girlfriend somewhere in the GCPD, leaving Nygma on a desperate campaign to solve the self-imposed riddles and find her. These were beautifully crafted scenes. You could tell the writing staff had been ITCHING to bring Ed up to this stage after his performance of monotonous series 1 riddles constantly raining on Jim and Harvey.

Penguin crashes the mayoral party in an attempt to get revenge on Theo by killing him, in the awesomest cosplay attack of all time—hundreds of dudes dressed as him, limping like him, shooting shotguns like him. It was an epic piece of work to see on a TV screen.

Silver caused a successful rift between Bruce and Selina, and got onto Bruce’s good side (and apparently his heart 20+ years early)

Jim eventually learned the truth about Theo this episode, and promised to go after Theo in the future.

Penguin’s heart-wrenching parting with his mother.

Selina was awesome, and if you thought your life was hard, quit feeling sorry for yourself, because she’s gone through 50 shades of hell this season.

The story arcs are finally shaping out smoothly and the future looks bright (at least for us).

I was only disappointed by the Theo vs Penguin outcome. Why set those two characters up in that situation if you’re not yet willing to have a satisfying outcome? The future is yet to happen though. We may see a proper consequence yet.

So, in conclusion…The award goes to Mommy’s Little Monster!