DC in DC 2018: J.W. Cortes talks PTSD and being Alvarez on Gotham 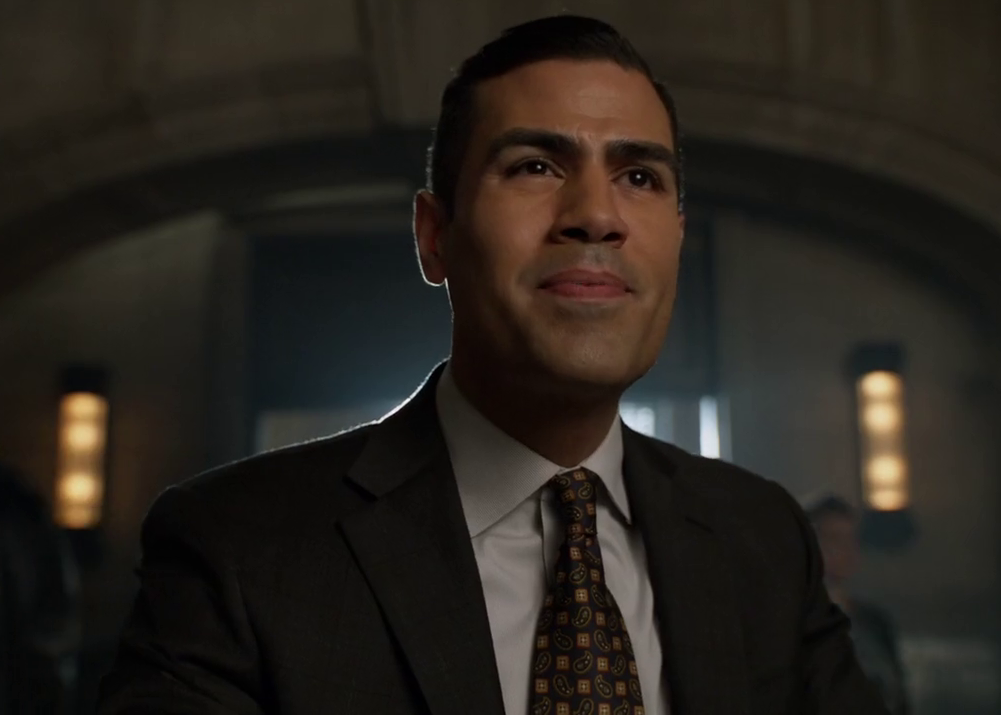 On January 13, DC held a non-traditional comic convention called “DC in DC 2018”. The event was held at Washington DC’s Newseum and featured discussions on topics such as feminism, LGBT representation, race, mental health and more.

In the press room we had the pleasure of speaking with J.W. Cortes. He had just finished participating in a panel called “Battle and Trauma in Comics” where the focus was mental health. J.W. Cortes is a Marine Veteran who has seen combat and currently divides his time between serving New York as a cop and playing Alvarez on “Gotham”.

Alvarez has been around since season one and has survived many of the mass cop slayings done by Zsasz, Jerome, Pyg and the Alice Tetch virus. We’ve often joked that Alvarez is the “red shirt” who won’t die. Naturally it amused me that he was wearing a literal red-shirt. I pointed this out to him and asked him why Alvarez has outlived all of his coworkers.

Cortes smiled and replied, “If they’re going to remain consistent with the comic books, Alvarez is a comic book character. He was in the New 52, the Catwoman series and he doesn’t die. If we’re going to follow that then that’s probably why I’m still alive”.

Cortes continued, “Alvarez strikes an interesting balance in the GCPD. It’s kind of hard to explain his role in the GCPD. I’m always arguing with Gordon and Bullock. After the season finale of season three, when I read that script I said, ‘Oh my god, they’re killing Alvarez’. And then I found out I was coming back. I was happy of course. I think at this point, being one of the few detectives who is alive, it would be nice to see Alvarez a bit more employed. Maybe deployed to one of these cases that you always see Gordon and Bullock going on and I suspect that’s going to happen really soon.”

“I think it’s time that we see a bit more of him,” he added with a knowing grin.

Cortes revealed that did some homework on the origins of his character. “I didn’t know about Alvarez to be honest with you, it was actually someone on social media who tagged a picture of Alvarez the comic book character with me and I’m like ‘Man that guy looks like me. That’s so cool that they’re drawing me’. It’s the other way around. Obviously I want to be as informed as possible and I want to do my homework so I went and bought every comic book that Alvarez was ever in. I actually reached out to the creator Judd Winick and Guillem March who drew Alvarez and asked a bunch of questions,” Cortes said.

When asked what other DC characters he’d like to play he replied, “Blue Beetle. Diablo”.

“It’s unique opportunity to have someone like me who served in the war and the mean streets of New York City to be bring that level of authenticity to a comic book character. I look forward to that opportunity one day,” he continued.

He was asked about if he welcomed the opportunity to discuss the mental health issues the panel was focusing on. “I think it’s about time. We’ve been at war as a nation now for over 15 years. Many of our young people are veterans now themselves,” Cortes said.

“I think the fact that we’re talking about it is a positive and not a negative,” he continued.  “But I want to make sure that we’re being truthful. Post traumatic stress doesn’t mean you’re going to come home and shoot up a school or post office. That’s not what we’re talking about here. We’re saying that you can have it but you can overcome. You can fight through and you can get help and you can come back and do amazing things. You can be soccer coaches, you can be principals at schools, you can run corporations. Hell, you can even come back and be Detective Alvarez on a show like Gotham.”

Tying into the PTSD subject and “Gotham,” TBU’s intern Ben asked Cortes how Alvarez would deal with PTSD and survivors guilt after constantly seeing his coworkers die.

“I think one of the ways Alvarez can experience post traumatic stress is he doesn’t really have a lot of friends on the show so maybe he can be an introvert. Someone that maybe feels a bit alone in all of this. Maybe he’s incredibly frustrated with the fact that he can’t be used more. One of the things that veterans experience is when you come back…when you’re in the service you’re in charge of millions worth of gear then when you come back you’re in charge of yourself. Maybe Alvarez feels like if he was used a little more and he would be more gainfully employed then he would be more useful,” Cortes said.

Would J.W. Cortes make a good Jamie Reyes? Do you think Alvarez should get a larger role on Gotham? Sound off in the comments section below.