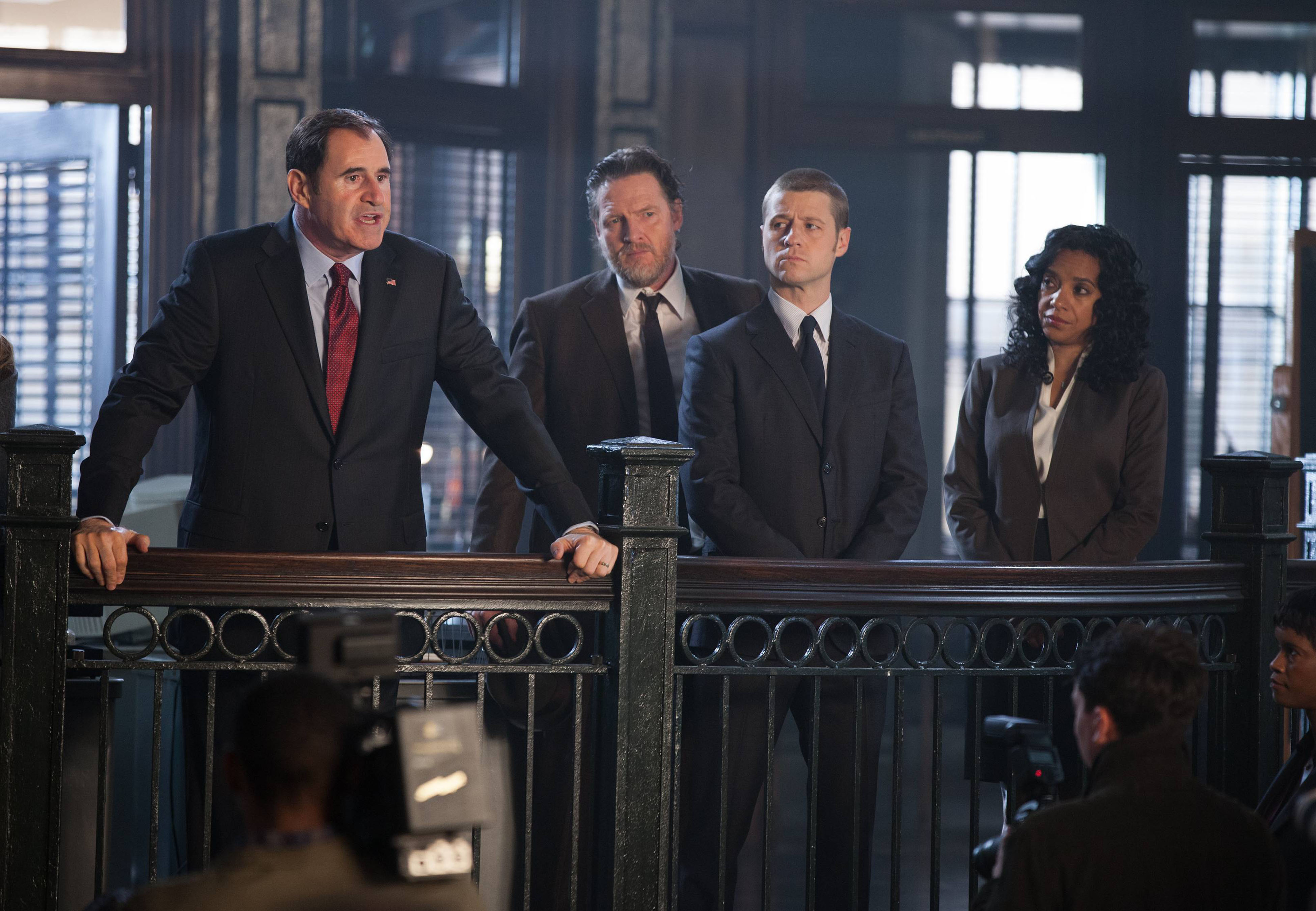 In the second episode of Gotham, Gordon and Bullock are tasked with investigating the murder of a homeless veteran. Their investigation uncovers a series of kidnappings of Gotham street children. The children are disappearing by the dozens and no one knows why.

Edward Nygma informs the detectives that the deceased homeless veteran had ATP in his system. The drug was used to subdue unruly patients at Arkham Asylum, which has been closed for 15 years. Further investigation leads to a druggist (Wayne Duvall) who has been supplying the kidnappers (Frank Whaley and Lili Taylor) who are abducting the children and are selling them overseas to the Dollmaker. At his store, they find the children and the man and woman who are snatching the children. They rescue the kids, but the perpetrators get away.

There is increased pressure on Gordon and Bullock to solve the case due to the story leaking to the media. Barbara Kean, who learns about the case from her boyfriend Jim Gordon, is the one who leaked the story to the press. This angers Bullock, who tells Gordon to control his woman.

Meanwhile, Alfred discovers that young Bruce Wayne is hurting himself. The butler is angry at Bruce, but does immediately apologize. Not knowing what to do, he goes to Gordon for help because Bruce respects him. The detective talks to Bruce and tries to get him to talk about the pain he is going through, instead of hurting himself. Bruce retorts that he is not hurting himself, but rather, testing himself.

Outside of Gotham, Oswald Cobblepot is hitchhiking his way back to Gotham. He gets picked up by two young men in a truck. While they are talking, one of them tells Cobblepot he walks like a penguin. Cobblepot snaps. He smashes the beer bottle they gave him and slashes the throat of one of them. He then rents a trailer from a farmer and holds the other for ransom.

Considering she is the namesake of the episode, very little is seen of Selina Kyle. Other than witnessing the veteran’s murder and almost getting abducted twice, she has no purpose in the episode (However, she does inform Gordon of something that may make her a bigger part of future episodes). She is symbolic of the crowded landscape in Gotham, one of many characters (Edward Nygma is the other notable character) included in this show that may or may not be justified in being in the show. The writers have yet to justify their existence on this show other than simply including them for the sake of including them. Yes, origin stories are great, but changing them to include these characters in this show just for grins and giggles is unacceptable. Yet, the writers still have time to prove to the audience that they had valid reasons for including these characters.

Furthermore, Selina Kyle demands to be called “Cat.” She gives no justification as to why she wants to be called this nickname. Hopefully the writers will enlighten the audience soon on that matter. As of right now, this foreshadowing is far too blatant.

Selina Kyle is not the only problem with this episode; in this episode, the depiction of Alfred is shown to be drastically different than previous incarnations. As we saw last week and see even more this week, Alfred is a tough-as-nails, no-nonsense man. His response to discovering Bruce with a candle, burning himself, is ferocious anger. Yes, he immediately apologizes and hugs him, but it is a difficult apology to believe. The traditional Alfred is much more caring towards Bruce than what is seen in this week’s episode. It would behoove this show for Alfred to be more understanding and gentle.

As far as the acting is concerned, Camren Bicondova and Robin Lord Taylor shine this week as Selina Kyle and Penguin, respectively, while David Mazouz struggles as Bruce Wayne. Bicondova has truly found her character. She more than adequately has depicts the confident and cunning kid that will eventually become Catwoman. Taylor, likewise, is really finding his character. This week, Taylor presents a chilling view of Oswald Cobblepot. His work in the scene where he threatens to poke out the eyes of his kidnapping victim is brilliant. Mazouz, on the other hand, struggles to accurately depict the damaged, young billionaire Bruce Wayne. His performance feels forced. He appears as though he is acting like he is Bruce Wayne, as opposed to actually being Bruce Wayne. The young actor needs to make his role feel more real.

Overall, the episode had an intriguing main story. The side plots focusing on Fish Mooney and Oswald Cobblepot add necessary detail to the state of the organized crime community in Gotham. However, the side plot with Bruce Wayne seems extra. The writers are trying unnecessarily hard to create a relationship between a young Jim Gordon and an even younger Bruce Wayne. There is no need to create this bond.

This episode is a step back from the excellent pilot. The previously mentioned problems damage an otherwise solid main plot. Overall, however, it is still a quality episode.