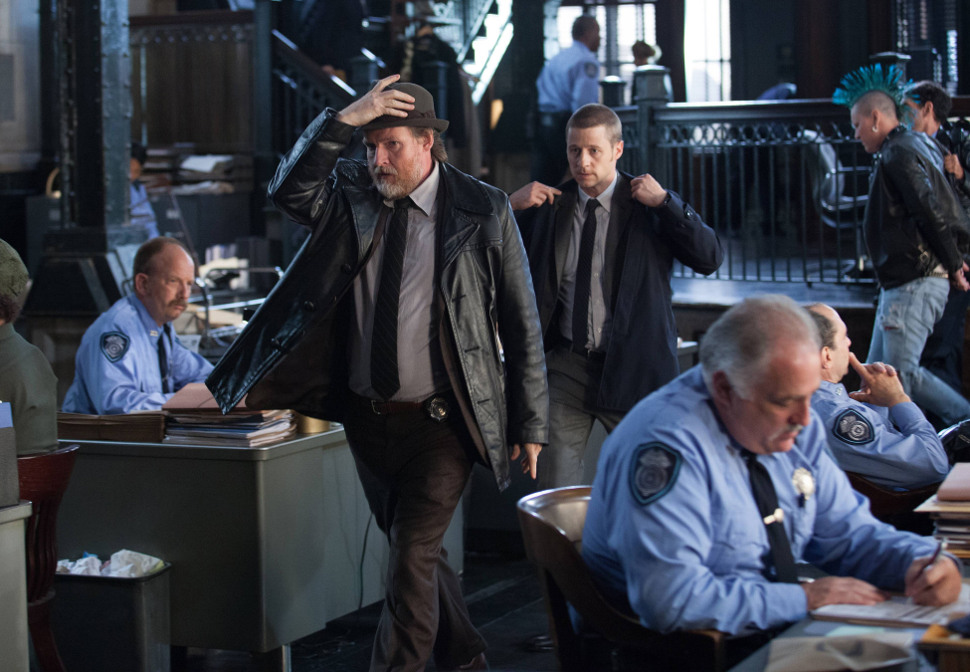 Oswald Cobblepot is back! The third episode of Gotham opens, with the future-Penguin arriving back in Gotham on a bus. He looks around and witnesses several crimes and acts of corruption occur. After seeing all of these things, he smiles and simply says, “Home.” Wasting no time trying to climb back up the chain, he kills a man who recognizes him and kills another man to get a job in a restaurant owned by Sal Maroni (David Zayas), arch-rival of Carmine Falcone.

The main story of the episode begins with a reporter filming a report on a man accused of running a ponzi scheme. Just after the on-camera report wraps up, a man selling balloons confronts the accused and handcuffs him to a weather balloon, which carries him away, never to return to Gotham alive.

Bullock is reluctant to investigate. In his mind, the killer did the city a favor. Gordon disagrees. This dispute leads to an argument about Gordon’s investigation of cases Bullock claims are closed.

However, after a second victim is lifted into the stratosphere, Bullock gets more concerned, due to the possibility of more cops losing their lives. The victim is corrupt cop Lieutenant Bill Cranston (James Colby). While the city rallies behind the “Balloonman”, there is concern at the GCPD about the safety of all public servants because it is clear the Balloonman is targeting corruption in Gotham City, meaning any politician or police officer could be next.

Elsewhere in Gotham, other key elements of the city are busy. Selina Kyle outwits Gordon, while proving she was a witness to the Wayne murder, and escapes being shipped to an upstate juvenile facility. Fish Mooney continues to undermine her boss, Carmine Falcone, who assumes it is the work of Sal Maroni. Alfred trains young Bruce Wayne in the art of swordplay. Bruce is, however, more interested in the Balloonman case. He is also not eating. Lastly, Detectives Montoya and Allen continue to investigate the possibility Mario Pepper was framed and that Oswald Cobblepot was killed. After hearing that it was Detective Gordon who shot him (and possibly at the request of Falcone), Montoya warns Barbara Kean that Gordon is dangerous. Barbara stands up for Gordon’s character and accuses Montoya of lying. It is evident that the past between Barbara and Montoya involved romance, drug use, and many lies from Montoya.

After Robin Lord Taylor and Camren Bicondova received praise for their performances last week, one continued to excel in his performance, while the other’s performance slipped. Taylor continues his cold portrayal of a young Oswald Cobblepot who mercilessly kills to get what he wants. The best moment of Taylor’s performance this week is the way he brutally stabs an old associate and then calmly orders a tuna sandwich across the street moments later. The same cannot be said for Camren Bicondova and her portrayal of Selina Kyle. Last week it was David Mazouz’s lines that felt forced, this week Bicondova is guilty of the same fault.

The real bright spot in this episode, though, is the relationship between Barbara Kean and James Gordon. The chemistry between the two was in fine form in “The Balloonman.” Erin Richards and Ben McKenzie work well together. Richards truly shined this week in her role as Barbara Kean. Her performance brilliantly depicted the ups and downs her character went through in this episode. Ben McKenzie was also on his game this week, expertly portraying the distressed Detective Gordon and his fears regarding the corruption in the city and the possibilities that there will be more vigilantes and that the truth behind Oswald Cobblepot’s disappearance will come to light.

The writers, too, deserve credit for the excellent character development of James Gordon in this episode. Gordon’s monologue about the people of Gotham losing hope foreshadows not only Batman, but also the possibility of more vigilante characters like the Balloonman on Gotham. Furthermore, Gordon displays Sherlock-Holmes-like detective skills in this episode. The lightning-fast workings of Gordon’s mind leaves Bullock’s character in shock. This exchange was highly entertaining to watch and was well-written.

Similarly, the writing staff also wrote great material for Bruce Wayne’s butler, Alfred Pennyworth. His interactions with Bruce Wayne were more akin to the traditional depiction of Alfred. While sparring with the young Bruce, the butler had some amusing banter. There was also a moment or two of sass from Alfred this episode that was reminiscent of the Alfred depicted in Batman: The Animated Series. Moreover, Alfred is appearing more fatherly. He is concerned by the downward spiral Bruce is going down, and is responding with less anger. However, the highlight of Alfred in this episode is a line that can only be described as classic Alfred: “Master Bruce, forgive me for uttering the tired old words ‘In times like these’, but in times like these, you really need to keep your strength up.”

After a step back last week, Gotham took a step forward this week. Lacking in major issues, this episode shows you that the creative team knows what they are doing. Despite worries about a regular cast that is crowded with major characters, each with their own origin stories to tell and their own drawn-out side plots, the writers have asked the audience to trust them, and this episode offers hope that trusting them is not a foolish endeavor.