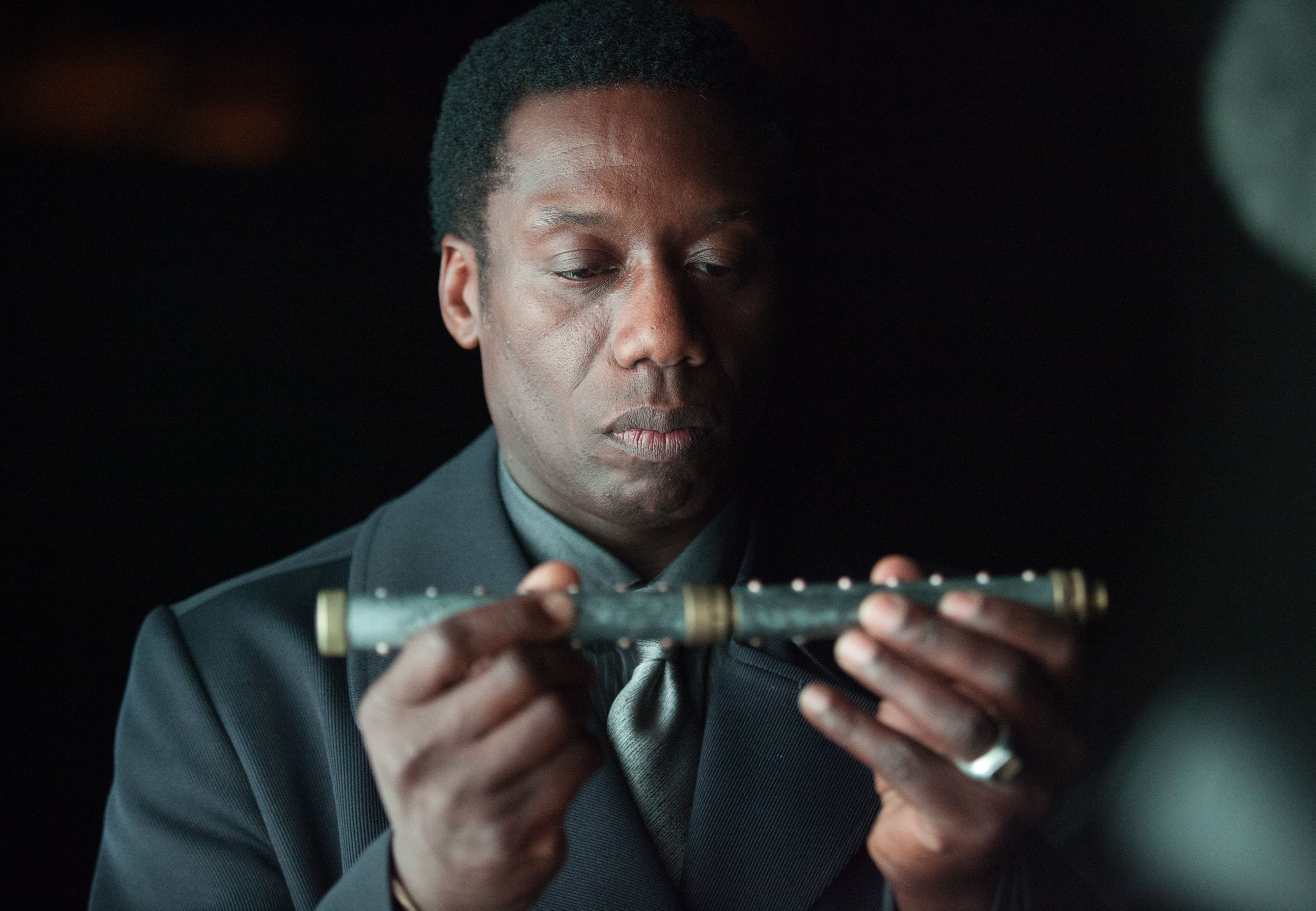 The fourth episode of Gotham opens right where last week’s episode left off, with Oswald Cobblepot paying a visit to Detective Jim Gordon’s apartment. Cobblepot gives a false name to Barbara, and Gordon tells her the visit is work-related. He escorts Cobblepot out of the building. Once outside, Gordon pins him up against a wall and gets angry. He asks why he came back and says that he should have killed him. Cobblepot states that Gotham is his home and that he is willing to help Gordon with the impending gang war. He gives Gordon inside information about Arkham and how it is related to the struggle between Falcone and Maroni. Furthermore, the young Cobblepot assures Gordon that no one will find out he is still alive because “[n]obody looks for a dead man.” This is all part of Cobblepot’s plan to rise in the criminal underworld of Gotham City. The details of his plan, shrouded in mystery, become clearer as the episode progresses.

Barbara, not knowing Oswald Cobblepot was in her home, begins to distrust Gordon because of his refusal to talk about him. When she asks him point-blank who he is, he deduces that Montoya told her about him. He then presses her about Montoya. She reveals to him that they had a relationship before she started dating him and reiterates that he is the one with whom she wants to spend the rest of her life.

Meanwhile, with the vote on the future of Arkham upcoming, both Falcone and Maroni are putting pressure on members of City Council to vote in favor of their respective plans for the site. Currently, Arkham is closed. Falcone wants to build high-income housing on the site, to bolster his business. This plan is known as the Wayne Plan because Thomas and Martha Wayne had pushed for a new mental health facility to replace the old, rundown, and closed facility. Under the Wayne Plan, Falcone would get to develop the land into high-income housing and the new facility would be built. Meanwhile, Maroni wants to build a waste-disposal facility on the land. To swing the vote in his direction, Maroni orders a hit on a city councilman that will be voting for Falcone’s plan. While Gordon and Bullock are investigating the murder, Falcone, in retaliation, takes out one of the councilmen that will be voting for Maroni’s plan. The evidence suggests both crime bosses hired the same hit man (Hakeem Kae-Kazim). When men charge into his restaurant, kill some of Maroni’s men, and steal some of his money, Maroni vows revenge against Falcone. As a result of the attack, the manager of the restaurant is killed and Oswald Cobblepot, who saved some of Maroni’s money during the incident, is promoted to the now vacant position.

Elsewhere in Gotham, Bruce Wayne has become greatly interested in the murders of the councilmen. After learning the murders may be related to the Arkham vote, Bruce begins looking for a connection between the murders over Arkham and the murder of his parents.

One positive element of this episode for Bat-fans is the spark of interest in detective work seen in the young Bruce Wayne. As he investigates, glimpses of the future-Dark-Knight are seen. The path from orphan to the World’s Greatest Detective is becoming clearer.

The key success of “Arkham”, though, is the tighter plot. In the previous three episodes, there were several side plots going on at once, causing a disjointed story and distracting the viewer from the main storyline. This episode is more focused. Both Cobblepot’s and Bruce Wayne’s stories are directly linked to the main story, the brewing gang war in Gotham, and any characters, like Selina Kyle, not involved with the story are not featured.

However, the Fish Mooney story in this episode, while technically related to the instability in the Gotham underground, is just plain confusing. Mooney is looking for a new singer for her club. The audition process consists of singing, attempting to seduce Mooney, and fighting. If Mooney wants another goon or even a prostitute, why look for this person by auditioning singers? This is just a bizarre sequence of events and added nothing to the plot. Yes, most of the episode is focused on the Arkham storyline, but this part is useless. Even if the chosen girl (Makenzie Leigh) becomes relevant with regards to the gang war later on, this story surely could have waited for another episode.

Another frustrating part of the show is that the writers do not know how to use Edward Nygma. They have changed his backstory, so he can be included in the show. But, he has had extremely limited screen time, and there has been no development of his character. The writers should have waited to include him until they had stories that more directly related to him. As of right now, he is just another minor character that has no relevance to the general development show.

Further disappoint in “Arkham” stems from the sudden problems James Gordon and Barbara Kean face. A key theme last week was the positive relationship between Gordon and Barbara, yet this week there is absolutely no trust between the two of them. What happened? Why the sudden shift? The writers gave no justification for Barbara’s delayed mistrust of Gordon over Cobblepot. Furthermore, Gordon could have explained to her that he did not kill Cobblepot, but the police force and Falcone need to think he killed Cobblepot. In a situation like that, Gordon should be able to trust that she will keep her mouth shut to keep him safe.

While the structure of the show improved this week by instituting a more focused plot, there are too many issues with this episode to ignore.