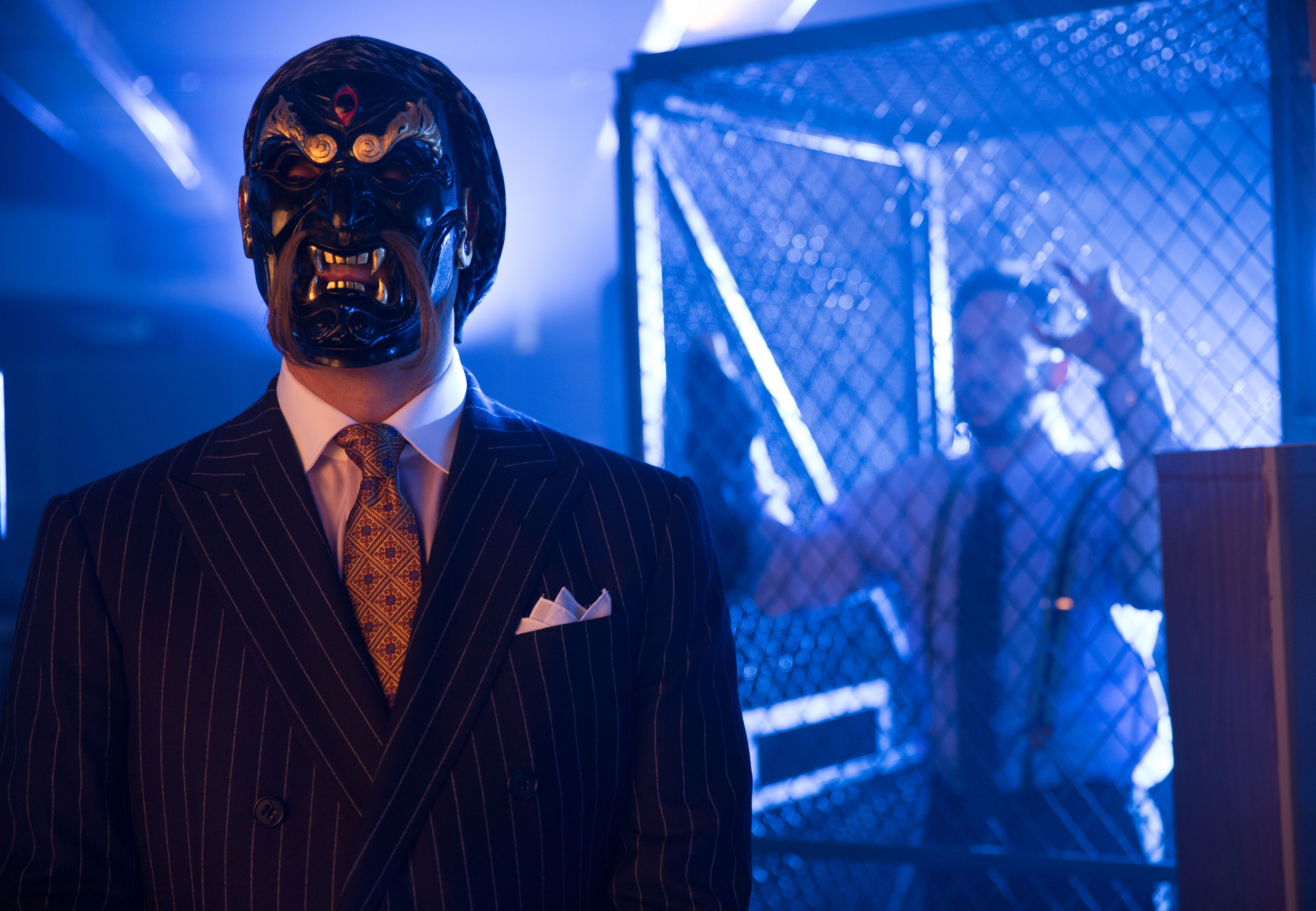 “The Mask” brings Gotham back to many plots within one episode. The main plot focuses on a murder investigation assigned to Detectives James Gordon and Harvey Bullock. The victim is found with part of a finger in his mouth and covered in ink. Edward Nygma later discovers that it is printer toner, not ink.

While following up a lead, the detectives are led to a prominent Gotham business and Gordon makes further enemies within the Gotham City Police Department. The black market surgeon they interview leads the detectives to investigate Sionis Investments, a company run by Richard Sionis (Todd Stashwick), father of Roman Sionis who eventually becomes Black Mask. However, after interrogating the black market doctor, Gordon arrests him, angering many cops at the G.C.P.D.

Meanwhile, Fish Mooney and Oswald Cobblepot continue their struggle to the top of the Gotham underworld. At the start of the episode, they are seen in Fish’s club pretending to establish a friendship. The façade drops after Fish stabs Cobblepot’s hand with a pin for betraying her, and they go their separate ways. Fish has her secret weapon, Liza, put something in Falcone’s tea to make him pass out so she can steal something for her. Meanwhile, Cobblepot kidnaps, interrogates, and kills the man that replaced Cobblepot as the man who holds Fish’s umbrella.

Elsewhere in Gotham City, Bruce Wayne finally returns to school. He has been away from his school for weeks in the wake of his parents’ murder. At school, he talks with Tommy Elliot (Cole Vallis) who asks extremely personal questions about his parents’ death. Bruce is unable to stand up to him physically because of the differences in their size. Later, when Alfred learns of the fight, he is not pleased and drives Bruce to the Elliot home to retaliate. He also promises to teach Bruce how to fight.

The investigation into the death of the man with a finger in his mouth shows the brilliance of Edward Nygma and his crazy mind. Cory Michael Smith has an excellent performance this week. There is a highly entertaining scene where Nygma examines the corpse even though he is not allowed to do so. He even asks himself a riddle with no answer.

This week’s investigation is also a showcase for Donal Logue and his character, Harvey Bullock. His monologue inspiring his co-workers to come to Gordon’s aide is one of the best moments of the series thus far. We are beginning to see that Bullock is not the corrupt cop he appeared to be at the beginning of the series. Logue plays the troubled, but noble cop admirably in this episode.

The investigation also reveals some poor choices by the creative team. The introduction of Richard Sionis changes his origin story. Origin stories are exciting to see, but this show constantly changes origins of characters simply for the sake of including them in this show. These changes have not ever been justified. The writers are simply trying too hard to include as many characters as possible. Furthermore, the costume team designed a mask for Sionis to wear that is horrifically ugly. Sionis looks foolish wearing it, and there is no need for him to wear it. There is also no introduction of his son, Roman. Why introduce the elder Sionis, but not the younger? The younger has more connection to the Batman universe than the elder.

The Bruce Wayne storyline is also intriguing this week. Bruce’s return to school was portrayed well by young David Mazouz. He shows a scared and vulnerable side of Bruce Wayne. This is a unique look at the character. We normally see Bruce Wayne portrayed as the man who spends his nights fighting crime, but this is new. Also, Sean Pertwee has an excellent performance this week, portraying Alfred. The Wayne family butler is shown, not as a protective guardian, but as someone who encourages the young millionaire to fight. His scene where Alfred intimidates the young Tommy Elliot is brilliant.

While the return to the multi-story episode format hurt this week’s episode, the stories the episode told were greatly entertaining. The stories about the GCPD and those about the Falcone and Maroni crime families are completely separate most of the time. The disjointed story lines leads one to wonder if this show might be better off splitting into two shows, one focus on Gordon and the G.C.P.D. and another focusing on the crime families.

Regardless of the show’s format problems, this episode is a well-performed. The actors shine and make the stories they are portraying come to life in an exciting and compelling way. Actors like Smith, Logue, Mazouz, Pertwee, and the always fantastic Robin Lord Taylor are the heroes of this show. Gotham does not survive without them.