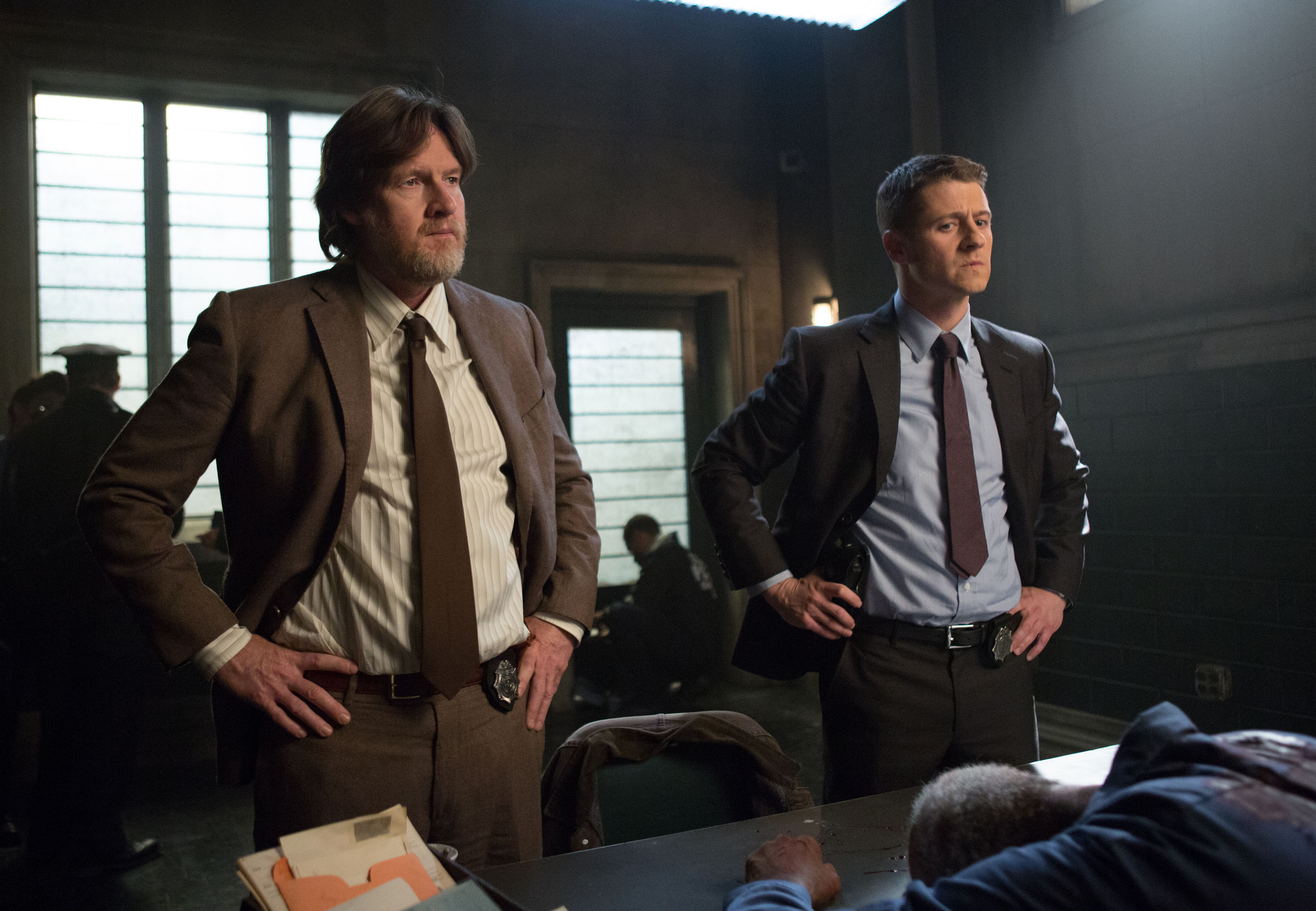 “Welcome Back Jim Gordon” is mostly focused on two main storylines. The first involves the fallout following Fish Mooney’s move on Falcone. The other focuses on the GCPD’s investigation of a murdered drug dealer and the murder of the witness of the drug dealer’s murder.

The episode opens up with Fish Mooney being chained up by Falcone’s men and tortured by a man named Bob (Michael Eklund). She shows tremendous stamina before being rescued by Butch Gilzean. After the escape, Gilzean recommends lying low until Fish recovers and then skipping town. Fish declares she wants to cut Penguin’s throat before leaving town. She and Gilzean head to her club which has been taken over by the Penguin. A confrontation ensues.

While waiting to speak to a sketch artist, the witness to the murder of a drug dealer is killed. Gordon and Bullock investigate and discover the guard log has a page missing. After applying some pressure, they discover that Detective Delaware (Niko Nicotera) is responsible for the missing page. Gordon throws Delaware in jail in a very public way, much to the chagrin of Bullock and Captain Essen. Soon after, Bullock informs Gordon that Delaware is involved in an operation headed by narcotics Detective Arnold Flass (Dash Mihok). The operation is protected by some very powerful people, and even the police commissioner is on the take. This revelation forces Gordon to make some difficult choices.

Elsewhere in Gotham, Bruce Wayne get his heart broken by Selina Kyle, and Miss Kringle grows closer to Edward Nygma. These stories highlight the odd pacing of some of the smaller plot lines in Gotham. The decisions to include certain side plots and exclude others from episode to episode have no logically reasoning. Yet, due to fantastic story telling and terrific acting, the show avoids implosion. The creative decisions as far as the timing of the side plots is confusing, but the writers save themselves by creating engaging stories. The performances by the actors are also wonderfully compelling.

“Welcome Back, Jim Gordon” also benefits from two major stories that are well-balanced and compelling. For the second week in a row, the writers are able to adequately balance the action between the criminal underworld and the GCPD. The show appears to be finding its stride in that area. Furthermore, the writers create two intriguing stories for each side of the spectrum. These stories are not only fascinating but are also aided by terrific performances by Jada Pinkett Smith, Robin Lord Taylor, Ben McKenzie, and Anthony Carrigan.

The minor issues are easily overlooked in this episode. The exciting stories and excellent performances distract from issues that would ordinarily sink an episode.