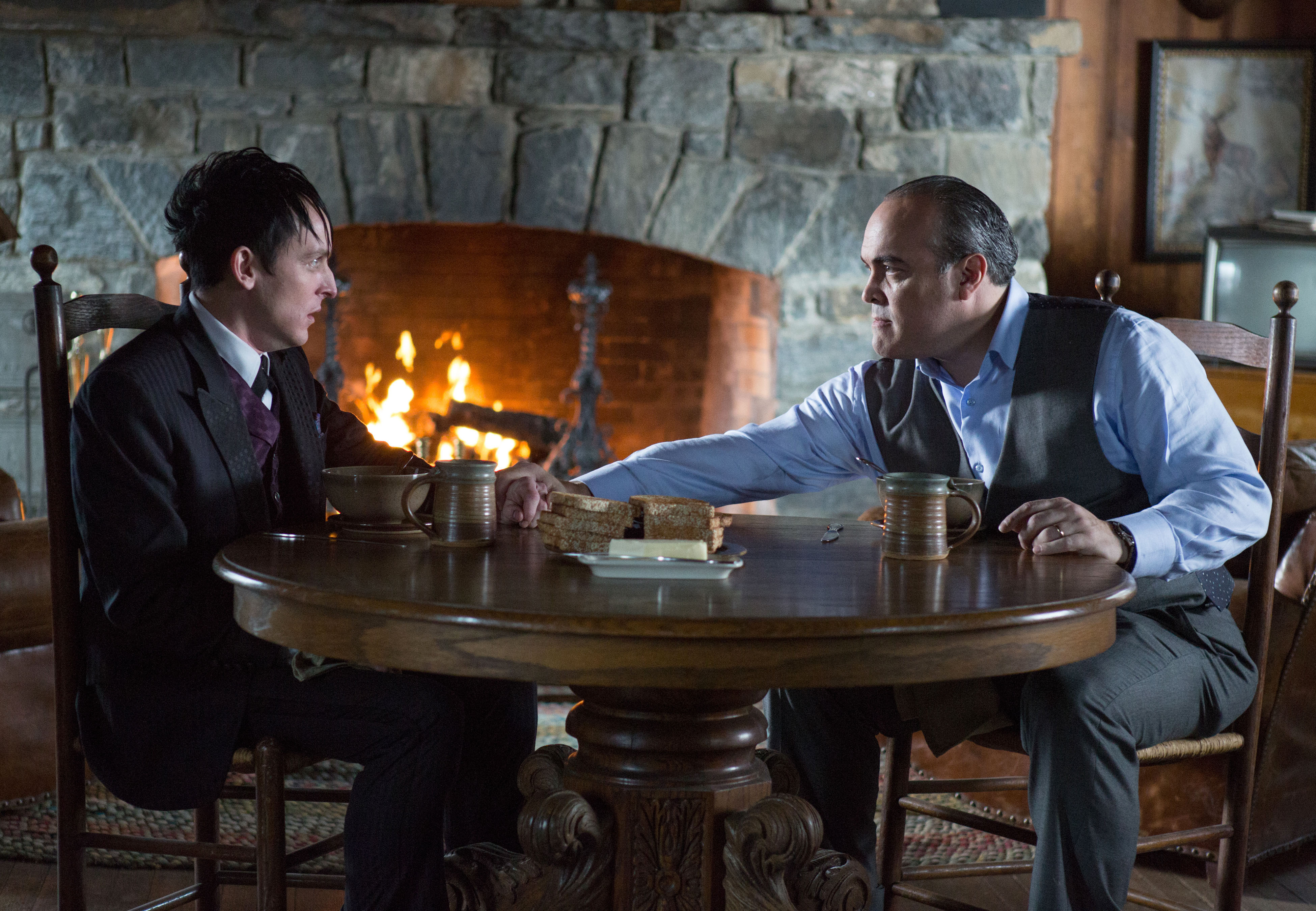 “The Fearsome Dr. Crane” opens with a man, tied to a chair and dangling from a Gotham City skyscraper. The next day, the man is discovered dead on the rooftop with a hole in his stomach. The GCPD’s investigation reveals the victim was a member of a phobia group. Gordon traces the chair found near the victim. He and Bullock explore the abandoned factory of the manufacturer of the chair. At the factory, they find a man tied to a chair surrounded by pigs and a man wearing a pig mask and wielding a knife. The policemen shoot and kill the man. Bullock thinks they have found their man, but Gordon is not so sure.

In the course of the investigation, Edward Nygma gets caught examining the body of the first victim. The medical examiner complains, and Captain Essen is forced to suspend him. The suspension is lifted, however, when a collection of limbs is found in the medical examiner’s locker.

While all of this is going on, Gordon returns the keys to Barbara Kean’s apartment, discovers Selina Kyle was lying, is released from his promise to Bruce Wayne to find out who murdered Thomas and Martha Wayne, and grows closer to Dr. Leslie Thompkins.

Elsewhere in Gotham, Oswald Cobblepot and Sal Maroni celebrate the almost certain death of Fish Mooney. While they are popping the champagne, Maroni gets a call from Fish Mooney herself. Fish informs him that the Penguin has been working for Falcone the entire time. Maroni takes Cobblepot upstate to confront him about this.

The main plot in this episode is a disappointment. It is rather boring and predictable. Aside from this, there are several more problems presented by the Dr. Crane storyline. The first is the lack of a name given for this week’s villain. The plot and the episode’s title implies he is Dr. Crane, father of Jonathan Crane, the future Scarecrow, but nothing concrete is given to confirm his identity. He is not even called a doctor. Furthermore, the is not the first time we have had an introduction to a future foe of Batman via his father who commits crimes similar to the crimes that will be committed by the future member of Batman’s rogue’s gallery. The only positive of this plot line is the development of Harvey Bullock’s human side. He falls for a member of the phobia support group, Scottie Mullen (Maria Thayer). His feelings for her drive how he handles the case, and it is interesting to watch.

The main story also provides a springboard for development of Edward Nygma. The character who has only been just a little bit weird thus far does something truly despicable. He plants the human limbs in the medical examiner’s locker to prevent his suspension from becoming permanent. And, Cory Michael Smith does an excellent job of portraying the eccentricities of Nygma in this week’s episode. The writing for Nygma paired with Smith’s acting makes one long for an episode centered around the future-Riddler.

The other side plots involving Barbara Kean, Selina Kyle, and Bruce Wayne seemed unnecessary and were completely forgettable. This is a shame because Sean Pertwee has been delightful as Alfred. It would be a boon to this show if there are more opportunities for Pertwee’s Alfred to get some screen time.

This episode has some really strong elements, but they are masked by mediocrity in other areas of the show. The writers do not lean on the strong elements in this show. The main thrust of the episode is focused on weaker storylines, creating a feeling of disappointment for the episode as a whole.