Review: Gotham: Damned if You Do 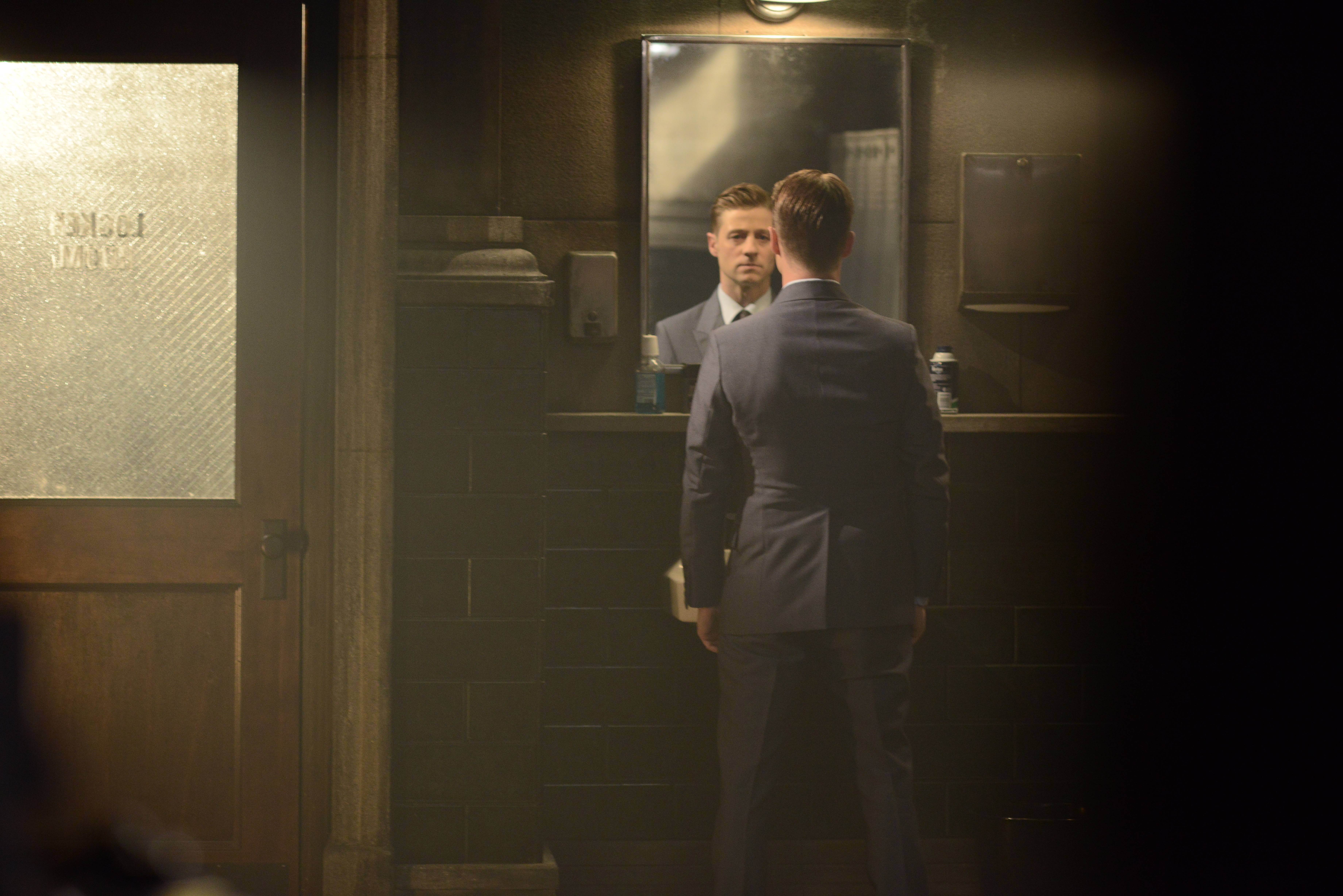 Wow! Rise of the Villains saw an impressive debut last night. Be sure to hit the comments for discussion and other notes.

Down to business, the episode began seamlessly from where we left off at the end of Season 1, where Bruce is descending into the cave. After finding a door with a code he can’t crack, a month flies by. No, that wasn’t a typo for “moth.” It says, “one month later.” So now I have to point out where I was wrong in my Season 1 recap I posted yesterday: Commissioner Loeb is now back in power after Penguin’s takeover. So Jim is directing traffic and Harvey Bullock quit to become a bartender. I made the mistake of thinking Jim still had leverage over Loeb.

In the GCPD, Edward Nygma is seen struggling with his newfound schizophrenia. In the mirror he sees the makings of the Riddler. Out of the mirror, he tries to shut up his louder side. It’s a very interesting take on what makes Nygma the Riddler, in more of a Two-Face manner than anything else: two sides battling each other.

Meanwhile, Penguin is still establishing his empire, which has a long way to go before it gains the universal fear and respect the Falcone reign had. Selina Kyle can now be seen trying to ascend the ranks of Penguin’s empire, appearing in a brief scene between Jim and Penguin. Interestingly enough, Penguin is still trading favors with Jim. From my understanding, they cut it even after the finale of last season, for Jim owed Penguin, and paid the debt by letting him go free. Yet Jim insisted Penguin owed him. This part is important: Jim was fired by Loeb on a technicality. Therefore, he went to Penguin to get Loeb fired and Gordon’s old detective job back. So now he’s trusting Cobblepot to be the new Carmine Falcone, and he’s willing to get his hands dirty to get his detective status back.

In Arkham, Barbara is making friends. She gets a muscle to protect her, a rich guy to supply her with phones to prank call her ex and haunt his current girlfriend, and a brain in Jerome to show her around life in the asylum. Until she and five others are broken out by Theo Galavan to form a team and terrorize Gotham in the future.

Now that we’ve summarized, let’s get into the judgment part:

What worked:
Jim and Leslie’s relationship was stronger and more realistic than what we saw last season.

The acting was superb, the characterization intriguing, and Loeb was toppled as early as this opener. This is good because if they’re going to make Gordon’s leverage disappear overnight, they better ditch the dude who’s causing the GCPD so much misery.

Jim’s dark deeds were handled well, both by McKenzie and by the writing staff, realizing that there can’t be any miracle back doors out of this one. He HAS to make the dirty choice, as Bruce insisted to him that it’s not about personal honor or reputation in Gotham, it’s about fighting every day just to make a difference.

Thomas Wayne used the cave to dig into his company. This is great. I was expecting drug running or a makeshift Batsuit or something crazy, yet the writers kept it closer to the character’s proper behavior. This was thrilling for me, more so than seeing a half-constructed Batmobile in the background.

As an opener, this was much stronger than last year’s Pilot.

What didn’t:
The sudden one-month time jump, as I said, ruined Jim’s leverage over Loeb that he gained last season. Maybe the war of the finale wiped it out. Who knows? All I know is Jim isn’t the type to let men like Loeb go.

Penguin really could have toppled the man he was having trouble dealing with. He didn’t need to make Jim kill him.

Barbara Kean is more interesting now that she’s evil and not awkwardly there being awkward, but there’s a little too much focus on her. I feel that other villains should have more time than she. Maybe it’s just me remembering her from last season. What do you guys think?

So, now for the final score: 3.5/5 batarangs. Really only lost the 1.5 due to the disjointed time leap that scrambled pre-established facts from last season, and it was a tad chunky in places. Bullock quitting? Jim directing traffic? Selina trying to get a job? Riddler is a Two-Face? It just raised more questions than I thought we’d have answered as to the tone of the season. But I saw the preview of what’s to come. As Jerome said, “You ain’t seen nothing yet!”