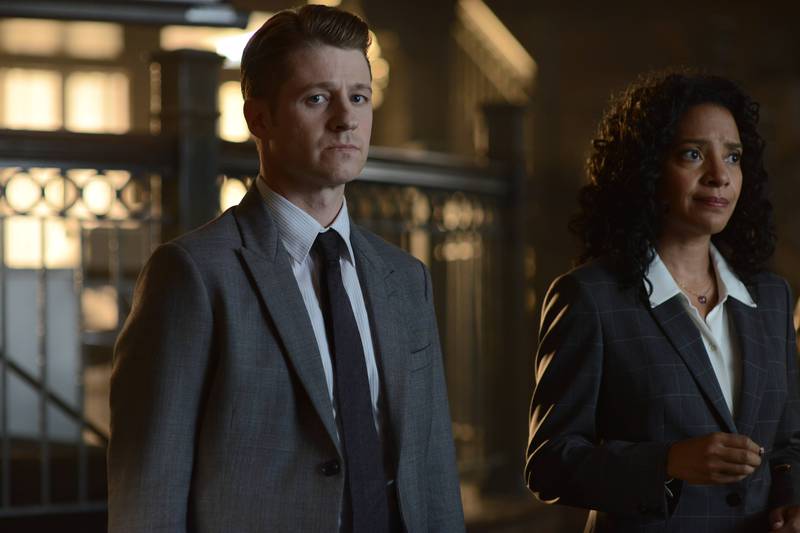 Gotham is already picking up steam this series, and we’ve only had two episodes. This episode was entitled Knock Knock, and continued the trend of delivering on its title. Our new supervillain, Theo has established himself as one of the few villains who can effortlessly control a group of Arkham crazies. It reminds me of Amanda Waller, but Theo is more successful in two key areas:

1. He treats the team like family—mentors them, supports them, and challenges them to achieve greatness.

2. He doesn’t force or straight up tell them what he wants them to do, he promises them rewards for having fun.

Edward Nygma is back at it again, battling his “more confident” side that has begun to appear on a regular basis. One is to wonder how long until it takes over.

Bruce Wayne, now in the cave, has discovered a computer with his father’s research into Wayne Enterprises, but Alfred, out of protective instincts, whacks the computer with an axe. Out of his anger Bruce “fires” his guardian (I’ll look into the legality of rich young boys without guardians) and only welcomes Alfred back after time alone to think and striking a deal that Alfred train him how to live the life of a soldier.

Maniax, the group busted out of Arkham last week, delivered the chaos and terror they promised. They dropped seven people off the roof of a building, spray painted to reveal their team name. Later, after the mayor of Gotham was left to the mercy of Theo’s sister and Barbara with whips, the team tried to burn a busload of cheerleaders, and successfully slaughtered about half the GCPD force. This prompted Harvey Bullock to return (yay!) but killed Sarah Essen in the process.

The dynamic between Theo and Maniax (should I put a TM after their name?)

Barbara’s smaller role. She’s a key, not a bomb, and she played her part with Jim well without taking up the whole episode.

Jerome was amazing in this episode. He has hints of the Joker, but at this age he’s stumbling on his feet, struggling to find his identity. That’s what Batman is for in their relationship. I can’t wait to see him as Jerome until then.

Nygma is battling schizophrenia, but during the GCPD massacre, he saved Ms. Kringle, his crush. She’s warming up to him now…

Essen is dead already. Who’s going to be the new commish?

No Penguin! (Okay, this is a personal preference, but you gotta admit he’s the coolest thing about this show)

Bruce’s tantrum. I understand he was upset, but the firing of Alfred was a little melodramatic. It was redeemed a little though by the fact he turned it into leverage to have Alfred train him. The calculating mind is what Bruce thrives on. Good to see it already. Also, if Bruce will go back to school, that means more Tommy…

In conclusion, I have to say this was a thrilling episode. It’s building off the opener while still promising future fun to come, not only in the story but the characters as well. I’m liking this show more without Fish Mooney. The pros outweigh the cons big time on this one.