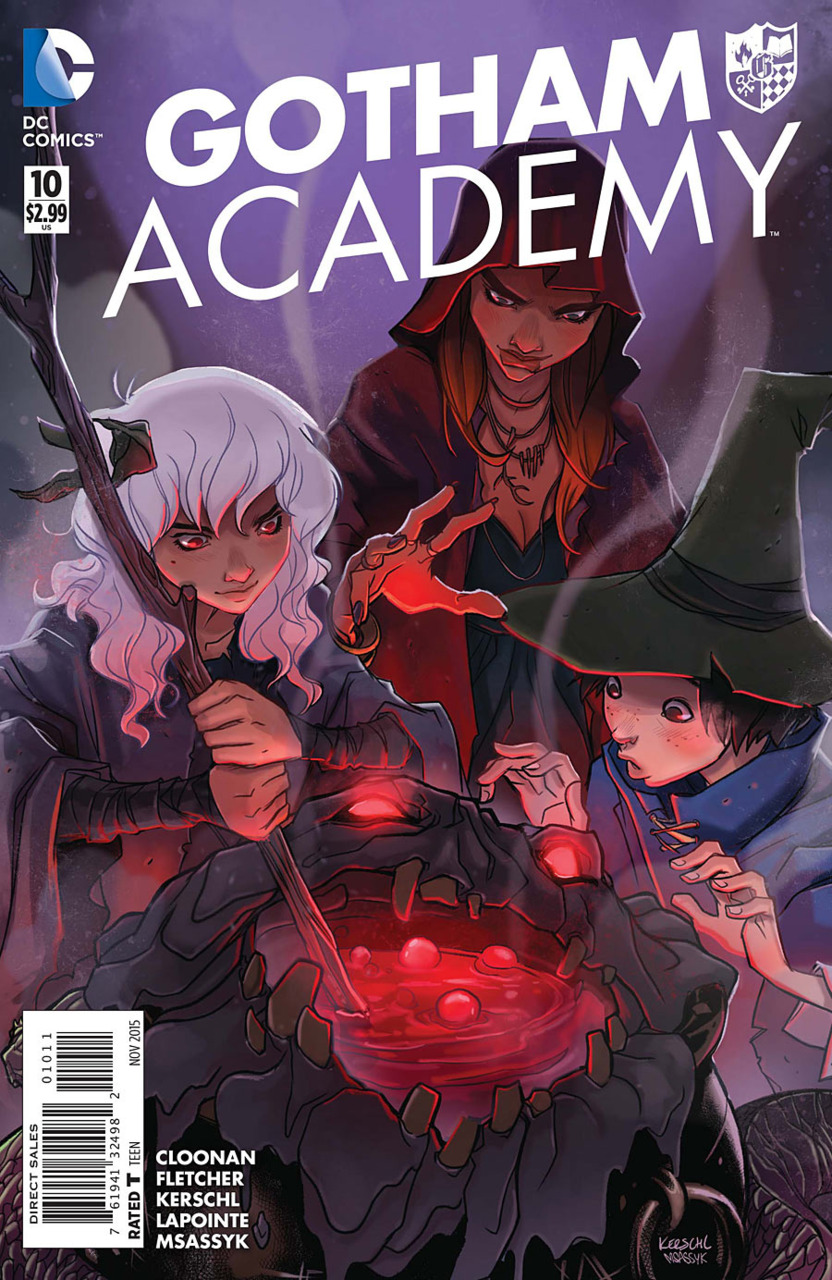 Olive, Pomeline and Maps meet Shakespeare as they try to learn the fate of Olive’s Mother in a spooky installment of Gotham Academy #10.

Double double spoilers and trouble below….

We last saw Olive and Pomeline confronting what they think is the ghost of Olive’s Mother, also known as Calamity, in GA’s theater which, oh by the way has been set on fire by the spectre. The girls run from the theater and encounter the director of the play, Simon Trent, who is upset that his production of the Scottish Play (turn, turn, turn, spit) is ruined.

Map’s creepy roommate Katherine asks to join the play but is rejected in favor of Olive, Pomeline and Maps who take over the witch’s roles. Katherine doesn’t look happy.

The three students and their friend Colton are rehearsing the famous Double Double Toil and Trouble scene when Trent investigates the missed lighting cues. Eric, the student in charge of the lights has seen what he calls the Phantom and is paralyzed by fright. Olive says she knows that the Phantom is really her Mother. Maps is upset because Olive shared this information with Pomeline and not her.

Colton finds muddy footprints which dead ends into a wall.

Later, Olive is playing Lady McB in the ‘out out damned spot’ scene when mud drips onto her head from the lights. There is a robed figure up in the rafters that tries to drop a sandbag on the fleeing Olive. Maps gets the Detective Club in action to chase the figure. They don’t find him but do discover Map’s map of the hidden passages throughout the school. Only her roommate Katherine has access to Map’s things. They go back to her room where they find a trail of mud, clues about a vendetta against Simon Trent, and a gooey muddy Katherine who disappears out the window.

The team goes to the theater and Katherine morphs into Clayface. Apparently Simon Trent stole Clayface’s best acting roles as well as his wife so the muddy menace is out to destroy the Director. Clayface also mentions that he met Olive’s Mom in Arkham and that she was crazy. Trent interrupts the exchange and he and Clayface fight while quoting Shakespeare. The battle ends as Olive and Maps turn a fire hose on Clayface which dissipates him and leaves behind a confused Katherine.

It turns out that Katherine is Katherine Karlo, Clayface’s daughter. Olive and Maps take her under their wing. Olive wonders if Clayface actually was the cause of the events at the theater. However, Pomeline arrives with a newspaper declaring Calamity loose in Gotham. Olive wonders if her mother is actually still alive.

This issue is another one-shot story that only tangentially concerns Olive’s search for her mother. Last month it was a werewolf, this month it is Clayface. While a one shot can be very interesting neither issue moves the story further, we seem to be in about the same place more or less as we have been since June.

This issue’s story was a little confusing. Making Clayface the villain kind of came out of nowhere. I’m not sure what the purpose of having his daughter involved is. If Clayface wanted to get Simon Trent why didn’t he just get to him in the parking lot? Why all the complexity? And is Katherine in the school just to get close to Simon? Will she leave the school now that her Father’s scheme is foiled? I know, its just a story, but it doesn’t make a lot of sense.

The art is, as usual, beautiful. The team of Kerschl, LaPointe and Msassyk work their usual magic. Can I say how much I love the way the plaid in the girl’s skirts are rendered? They look surreally horizontal.

If you have been reading my reviews of Gotham Academy you know that I am a big big fan. However, I am getting a bit frustrated at the lack of progress of the storyline with the two relatively weak one-shots. I was willing to give it a pass last month but now I am getting antsy.