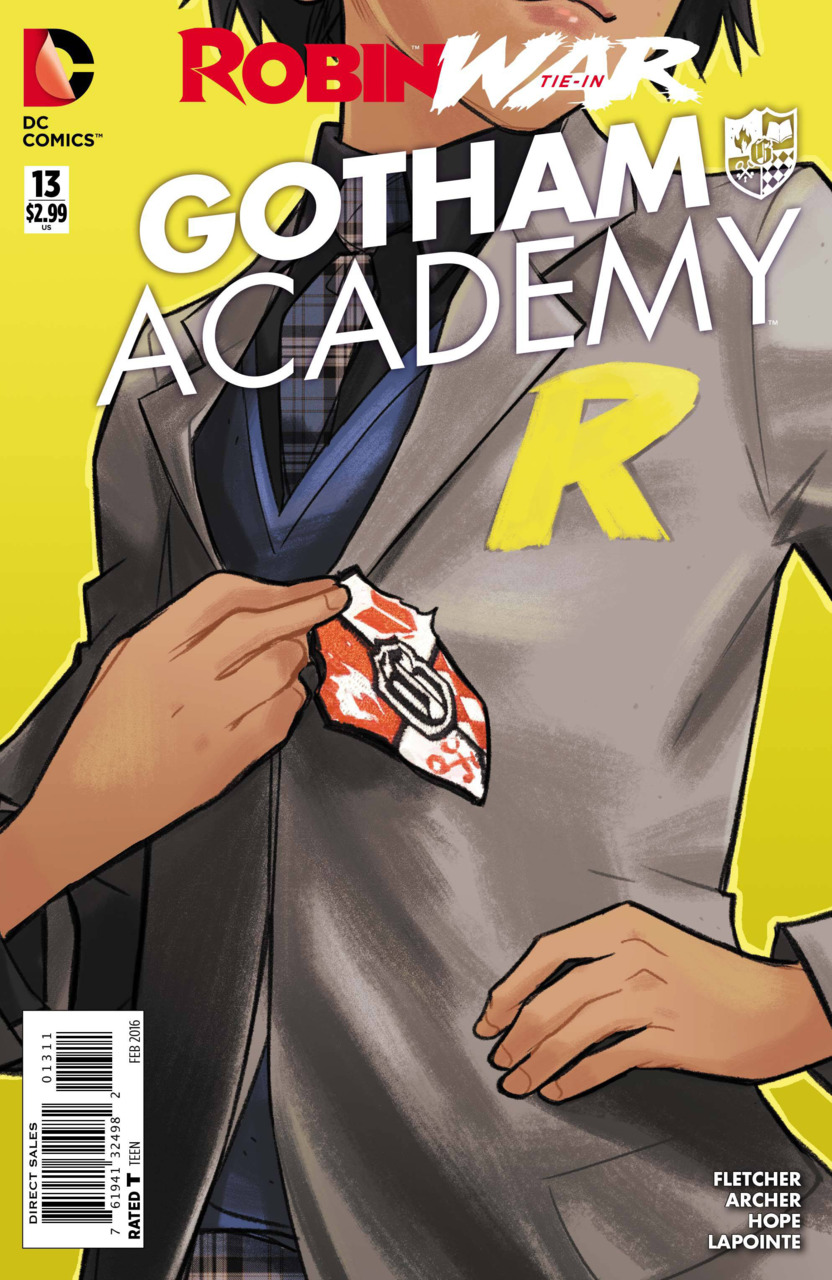 Racing atop the rooftops of Gotham Academy, this issue picks up with a Robin currently enrolled at the Academy chasing his roommate Tom Savini into the school’s green house. The two young men stumble upon a monstrous zombie-like figure digging himself out of a hole in the garden’s ground. The beast exits the green house walking directly towards the forest that surrounds the school’s grounds.

During a school assembly he next morning, the entire school learns that two boys from the previous night, Tom Savin and the Robin, Mr. Tancredi, have been expelled as a result of them being involved in a theft. However, the Headmaster informs the students that the stolen funds were recovered. He gives a final warning to the students, urging to steer clear of taking up the Robin color, for they are illegal in Gotham. The Headmaster concludes the assembly, calling Olive Silverlock to his office.

Later on, as the gang waits for Olive outside the Headmaster’s office, she exits with a prospective student Riko Sheridan (a current Robin in We Are Robin). Maps angrily storms off as she finds out that Riko will be staying in Olive’s room that evening.

Immediately after Maps cheers up, she gathers the gang to search for the monster they heard about the previous night. In the dark, they journey to the Academy’s green house to investigate. They quickly assess the scene and the hole, hypothesizing that the monster dug himself out of a deep and ancient grave. They decide to craft a plan to trap the monster that evening.

Somehow, they pull together a complex mechanism in which a heavy-duty net extends from to capture the monster after luring him in the net by cheese puffs and popcorn among other pre-teen food groups. They place the net directly outside of the classroom of “the biggest brain on campus,” Dr. Kirk Langstrom (Man-Bat).

While waiting on the roof, Olive and Maps notice Riko sneaking out of a window while rocking her Robin suit. Since her cover is blown, Riko joins Olive and Maps on the roof where her and Maps exchange stories of crime-fighting-and-solving.

Their conversation is interrupted by the moment they were all waiting for: the arrival of the monster. They nearly catch him but he escapes into the forest. Their noise calls the attention of Dr. Langstrom who joins in the investigation. After searching through the green house, Riko notices a few people wearing white owl masks just outside but nothing really comes of them.

In Dr. Langstrom’s lab, they divulge a successful plan to draw the monster to them. The monster who calls himself “Efrem” recognizes Olive as a Silverlock.

As they are discussing what to do with the monster that morning, Riko receives a call from another Robin Duke Thomas, she steps outside to take his call. Following her outside, the gang witnesses her getting arrested. To protect Maps, Olive reveals that she reported Riko to the police. Maps is upset and runs to protect Riko from the police.

Not too far from the police car, Maps is stopped by a familiar voice in the tree above her. He instructs her not to look up because it would give away his place. We see that it is Damian Wayne as Robin (his voice is familiar to Maps because Damien was in Gotham Academy #7). He tells her to trust Olive and know that this is for the best. He also shares that he has hidden gear around the campus and will notify them when they need to use it.

The issue concludes with Damian stating that he has “an army to vanquish.”

This issue was entertainingly interesting as always. Fletcher’s (and typically Cloonan’s) story-telling is a blending of the Scooby gang going to Hogwarts all taking place in the Batman Universe.

With not only Becky Cloonan taking a break this month from writing, the absence of the contracted artists was at times too obvious. Adam Archer’s pencils who was filling in for Karl Kerschl were far too cartoon-esque. At times, his pencils along with Sandra Hope’s inks felt more like anime than they did Gotham Academy. Serge Lapointe’s colors were, as always, delightful. He has a way of drawing the viewer’s focus without making the backdrop incredibly dull.

I would’ve given it a higher rating but the art this month wasn’t for me.