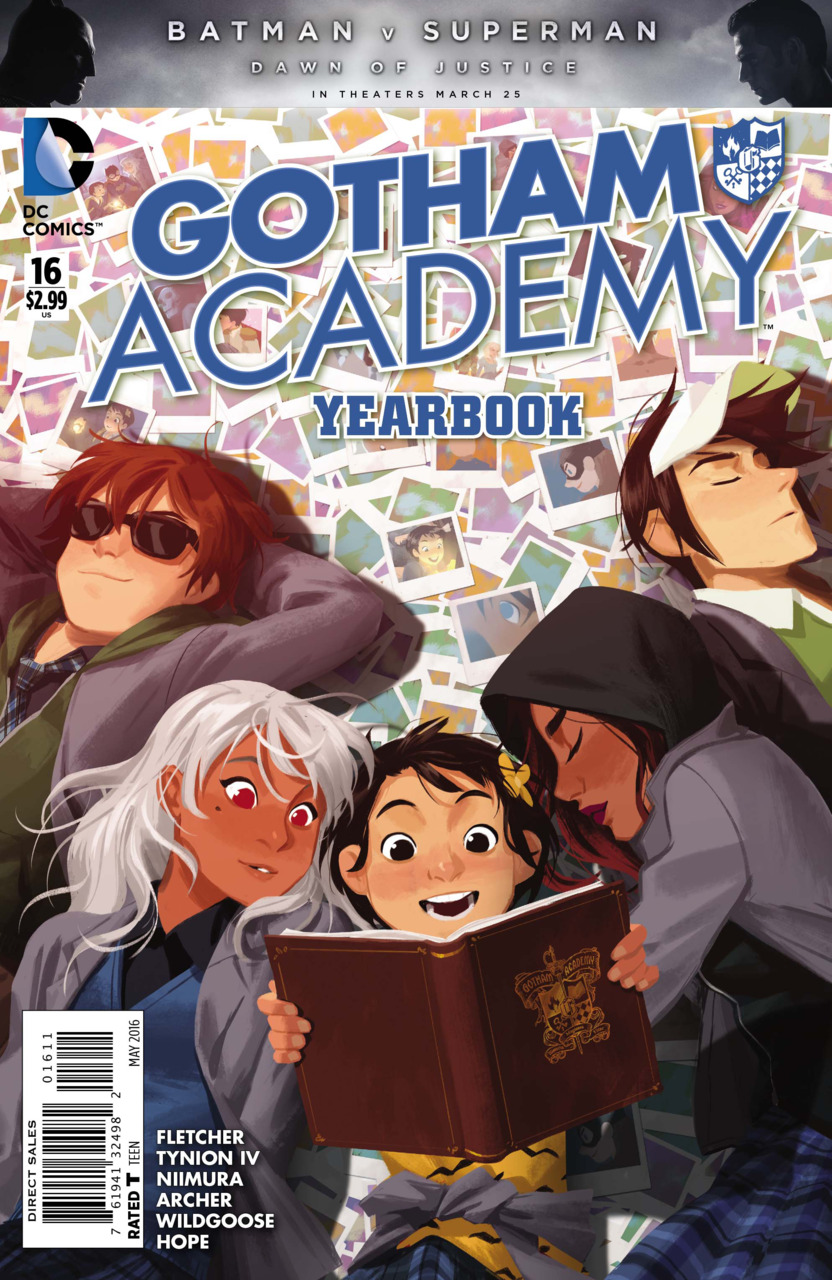 Synopsis: Part Three of the Yearbook story arc begins with Damian as Robin breaking into Olive and Maps’ room to steal her yearbook which she’s hidden beneath a loose panel in the floor.

James Tynion IV’s story, “Maps’ Day Out,” begins at a diner in Gotham City. Maps tries to convince Colton to help her carry out a plan that would let her not only meet Batman but also partner with him in fighting crime. After being given $100, Colton goes with Maps to the Gotham City Police Department. He enters with a backpack, playing dumb and stating that he found a backpack filled with smoke bombs. Colton “accidentally” trips and falls, dropping smoke bombs which create a diversion for Maps to run up the fire stairway.

On the rooftop, Maps discovers the Bat-signal. She joyfully turns it on and sits to await Batman’s arrival. After awhile, Maps accidentally falls asleep. She wakes up to find herself lying on her bed with the Batman drawings spread out. One of them had new writing on it, “Love the drawings!” with a Bat-signal signed below.

Not buying that Batman would do such a thing, we see Damian annoyed by the apparent fictitious nature of the stories in Maps’ yearbook. Talking to himself leads Pomeline to enter the room to see whose there. Robin quickly closes the yearbook and takes off through the window telling Pomeline that he needs it in order to protect the city. Olive walks in the room only to see Pomeline gazing at Robin swinging through the trees. Olive oddly isn’t too shocked that Robin would take the yearbook.

The remainder of the book, we are in Ken Niimura’s world, “Boring Sundays.” Maps narrates the story as she attempts to find something to do on a Sunday. She visits each of her friends, attempting to find something to do only to strike out each time. Just as she’s at her breaking point, Maps thinks of a way to turn her boring Sunday into an adventure.

We see Maps go into the forest near Gotham Academy and stumbles upon a time capsule. She brings it to Olive and opens it to find candies, a map and a letter from the first year of the school was open: 1779. The author tells of a terrible secret that they had discovered and buried the object at a certain place indicated on the map due to being afraid of the possible consequences they may encounter. The group decides to solve the mystery as the Detective Club. They agree to go get their tools and resources and meet back in half an hour.

As everyone leaves except Maps, Olive remembers that she left something in the room. She returns only to discover Maps with a quill and ink writing more letters. Although Maps fears Olive will be upset about her making the whole thing up, she is quickly please that Olive wants to join in and make the story better.

Art: Oddly enough, of the three art teams on this issue, I think I enjoyed Adam Archer’s work on the main story the least. Whether it’s his Pencils or Colors or Sandra Hope’s Inks, overall, their scenes seem too cloudy although I get it: the sun was out and shining into the room. However, Christian Wildgoose and Serge Lapointe’s work on “Maps’ Day Out” was excellent. I especially loved Maps’ sketch of Batman (in a Dark Knight Returns pose) and her alongside him as Robin. While Ken Niimura’s art could be seen by some as too far outside the DC design pallet, I found it to be uniquely fun. Perhaps it reminded me a little of one of my childhood-favorite shows “Doug.”

Final Thoughts: With two more issues in the Yearbook arc as well as technically in this series (will return in the fall as Gotham Academy: The Next Semester), I’m optimistic for the final two issues. Again, there’s still not much of an arc per se but rather a compilation of short stories with the gang written and drawn by lesser known artists. Those at the helm of this book clearly have an appreciation for The Batman Universe and characters deep within the history which is why I always enjoy reading Gotham Academy.