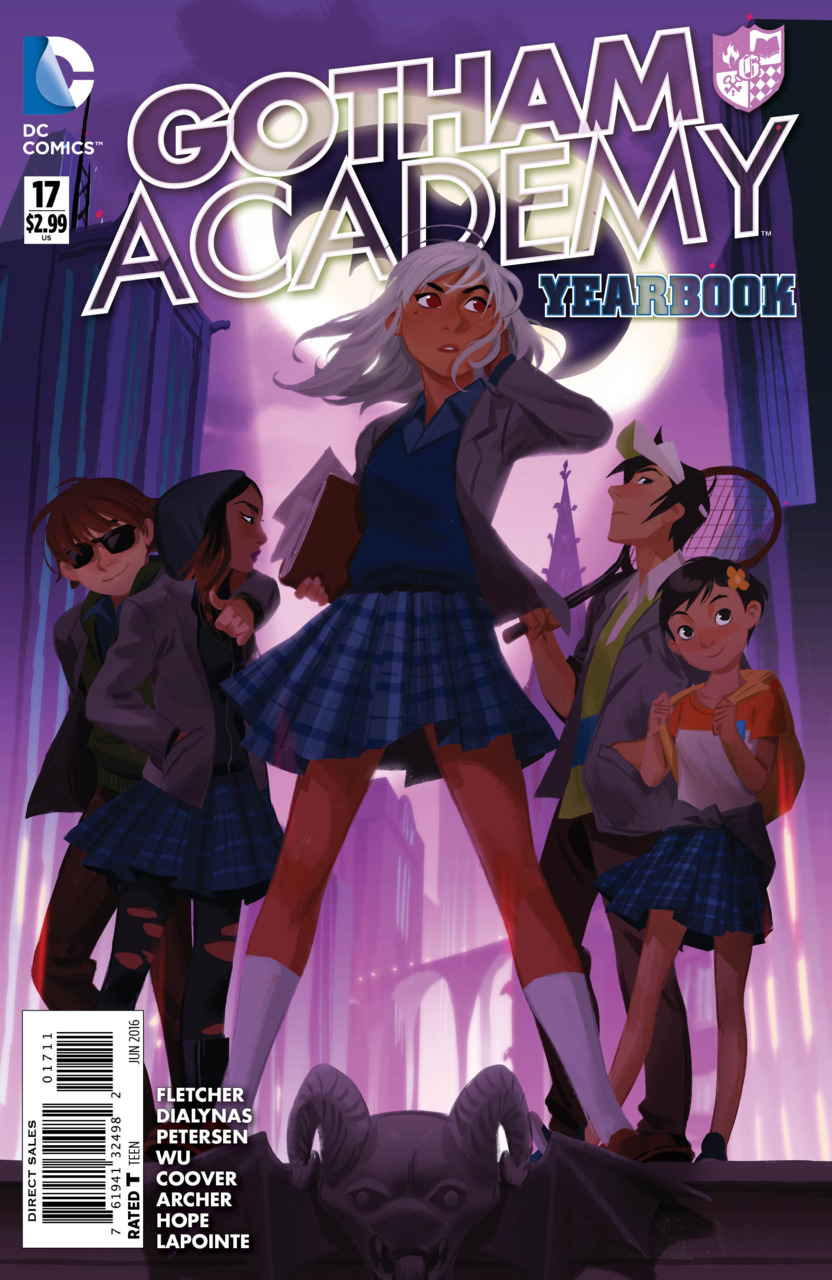 Synopsis: Maps is freaking out. Last issue, Robin (Damian Wayne) broke into her dorm room and stole her yearbook. The main reason Maps is frantic is due to a story she wrote in the book about an instance involving Pomeline and a boy.

In Brenden Fletcher’s short story, “This One’s For You,” the flashback focuses on Heathcliff, the Road Manager for Black Canary. Just as the band is finishing setting up for a music video shoot at Gotham Academy, a few students from the Academy watch in amazement from a distance. We learn that Heathcliff was a former Academy student but dropped out to work for Black Canary. Olive pull him aside to have a private conversation.

Inside the school, Olive walks Heathcliff to where Pomeline is reading by herself. After Olive leaves them alone, Heathcliff apologizes to Pomeline for past mistakes he’s made. She cheers up and they walk to a secret crypt they found together. While talking, Heathcliff tells Pom to come with him. He takes her back to near the video shoot and gives her a mixtape from Lord Byron, the drummer of Black Canary. After giving her the gift, he goes on stage, picks up an electric guitar, and joyfully tells Pomeline in the mic that he wrote a song for her. Immediately, she runs back to her dorm room. In the final panel of the story, we see her smile just barely because of Heathcliff.

As Olive and Maps are walking through a secret passageway in the Academy, the two discuss what they need to find Robin. After deciding they’re good just the two of them, Maps is ready for “mission: book hunt.” She wonders why there is an obsession with stealing books at the Academy, leading into the next short story.

Michael Dialynas’ “A Familiar Story” recalls a time when Maps and Olive were walking through the dorm hallways in the middle of the night. With flashlights in hand, the girls are startled when they see a giant demonic-looking cat holding “Klarion’s First Spell Book.” As they dodge the cat, it jumps through the glass window outside. We see the cat slowly transform back into a normal cat as he takes the book to Klarion the Witch Boy. He is waiting in an alley near the sewer. We see a ghostlike figure playing an instrument that seems to be keeping Killer Croc asleep. We also see a piece of “Mistah J” graffiti in the background.

While they continue to walk through the passageway, Olive tells Maps that Millie Jane’s diary was stolen, possibly by Batman because it contained notes about the school’s secrets. Maps mentions that Gilkey Warlocks were also featured in the diary.

David Petersen’s “What Became of the Gilkey Warlocks…?” tells the story of the a group of four boys at the Academy who find a secret room by leaning on a wall, opening a passage to the room (the tile had the name Jonathan Crane, AKA the Scarecrow, on it). The boys explore the room and decide to play Serpents & Spells. While playing, mysterious dark figures begin appearing behind each of them.

We conclude the issue with Maps telling Olive that they were never seen again. They find that very room and see a spot on the table where a book was clearly recently taken because the way the dust had settled. While Maps says, “Robin was here,” we see Damian hiding from the girls by holding himself up above them on the ceiling.

Art: I enjoyed the art variances in this book probably more than I have with previous issues. Annie Wu’s work on Black Canary has been some of my favorite art in recent years. Seeing her bring that in “This One’s For You” was awesome!

Final Thoughts: This was probably my favorite issue of the arc so far. Gotham Academy continues to delve deep into The Batman Universe toy box, drawing from Batman: The Animated Series and Batman 1989. Overall, as a Batman fan, I enjoy looking for Batman Easter eggs.