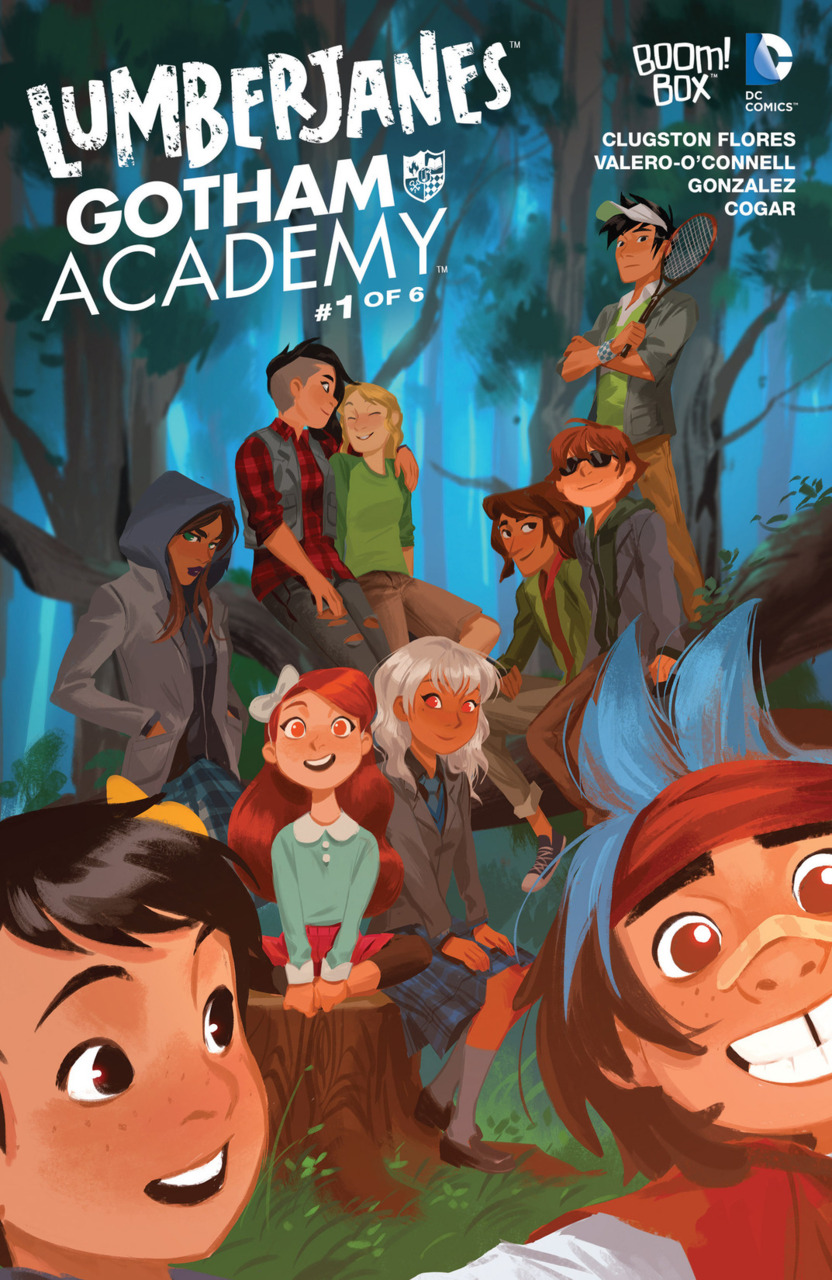 Rosie, the camp scout-master of the Lumberjanes crew, is walking in the woods at night far outside of Miss Quinzella Thiskwin Penniquiqul Thistle Crumpet’s Camp for Hardcore Lady Types. She comes upon a house in the woods and takes a closer look with her binoculars. She sees a UPS truck dropping off some packages and there is a woman sitting at a chair in front of a window. Rosie turns and sees something strange and tall behind her. She sends up an emergency flair which is seen by the rest of the Lumberjanes crew. Scout Leader Jen, realizes that something is wrong.

Several hours earlier at Gotham Academy, Olive has overslept for a class. Maps wakes her and Olive is upset because she wanted to turn an overdue paper on Witches and Spells into Professor MacPherson. Olive and Maps hurry to the Professor’s office but there is a commotion at the door. MacPherson’s office is a wreck with books and other office detritus scattered around the room. Headmaster Hammer sends the girls away and is obviously concerned about his missing teacher.

Olive and Maps use the secret passageways to get into MacPherson’s office to do some sleuthing with the rest of the Detective Club: Colton, Kyle and Pomeline. In the wreckage they find an invitation to the birthday of Miss Louise Nithercott-Greenwood at Greenwood Lodge. Even though the invitation looks brand new the date on it is 1986. Olive has a feeling that they should go to the lodge to check things out. Colton acquires the keys to MacPherson’s car and they all head out to Greenwood Lodge.

Back at the Lumberjanes Camp, scout leader Jen is freaking out about Rosie being missing. The rest of the Lumberjanes overhear her ranting to herself and insist on helping. Jen has found a picture of an old cabin that looks suspicious. Against her better judgment, Jen allows the Lumberjanes to take on the dangerous task of looking for Rosie.

The hungry Gotham Academy kids get close to the Lodge. They stop the car and Maps finds a trail to follow. They make their way through the woods when they hear rustling in the trees. Suddenly, the Lumberjanes emerge and surprise them. After the two crews introduce themselves, the very uptight and controlling scout leader Jen crashes into the scene and complains that the GA kids don’t have any gear.

After Jen endures some mild teasing Maps calls everyone to attention. Three giant robed and hornskulled creatures have emerged from the woods. The creatures make some kind of electric field with their hands. The creatures announce that the kids are trespassing and must come with them. The kids know a bad idea when they hear it and run off into the woods with the trio of weirdos on their heels.

They head to the river, which is the property boundry so that they will no longer be trespassing. As she runs, Maps drops her map and stops to pick it up. One of the creatures grabs her, but Lumberjane Ripley kicks the fiend away from Maps. Kyle, Ripley and Maps make their way across the river on a rope bridge which is destroyed by the skull beast just as they make it to the other side.

Colton and Pomeline along with Lumberjanes April and Jo knock down a tree and make their way across the river as well. The skull beasts are shooting energy beams at the remaining kids. Olive decides to fight the creature to save the others while Jen, Mal and Molly find their way across the river but Olive is surrounded. Mal and Molly get across the river on a rope swing but Jen rushes back into the woods to save Olive. The kids all head back to the Lumberjanes camp to think of a way to save their comrades. Until next month…

The Gotham Academy and Lumberjane team-up has the potential to be a match made in heaven. Writer Chynna Clugston Flores deals a fairly standard but perfectly serviceable opening chapter to this six part mini. She apparently has realized, correctly, that she is working with two groups of characters that are full of personality and this tale will work as long as their interactions are the focus. Keep the story simple and let the kids shine.

Of course, the first to pal up are the two irrepressible youngsters Maps and Ripley. It would have been disappointing otherwise. But there is also an interesting combinations of opposites as the chill goth Pomeline pokes lighthearted fun at the eternally hysterical Jen. Of course Olive has the courage to protect all of her friends old and new, but her heart is matched by Jen’s who ventures into danger to save her right back.

The pencils are by Rosemary Valero-O’Connell, Inks by Maddi Gonzalez and Colors by Whitney Cogar. The issue is in the simplistic style of the Lumberjanes, not the gorgeous dreamy realism of Gotham Academy. Luckily, we have been conditioned to seeing the GA kids drawn in different styles in the recent Yearbook installments so the change here isn’t a shock. However, there are a few overly simplistic depictions. When we first see Maps her she isn’t much more than a smiley face with a couple of dots and a single stroke mouth.

I have been waiting a while for this team up and I am not disappointed. I’m a big Gotham Academy fan and love to see DC, and Boom, expanding their appeal with team ups like this. I do have to say that I miss the GA art style. A crossover the opposite way, with the Lumberjanes coming to Gotham Academy would be something to look forward to.