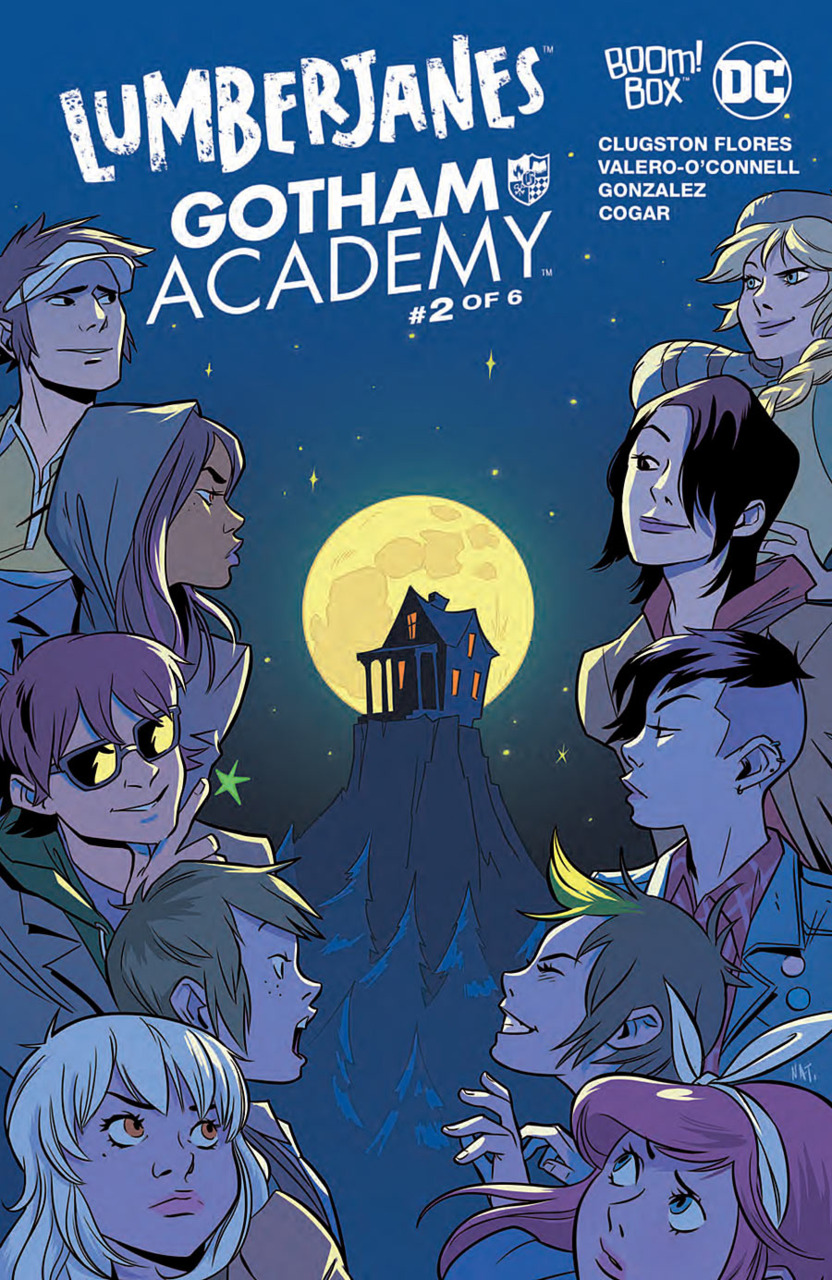 The mystery of Greenwood Lodge begins to reveal itself to Olive and Jen as the rest of the Lumberjanes and Gotham Academy gangs plan their rescue.

Spoilers and suspense below…

Olive and Jen wake up in what appears to be the bedroom of a 1980s era teenage girl complete with vinyl record player, rotary phone and lava lamp. There are two dresses laid out for the ladies to wear with a note inviting the pair to the salon to attend a new guest orientation.

Back at the Lumberjanes’ camp the remaining teams argue over whether they should take quick action to save their friends or make a plan. Maps decides to solve the problem by coming up with a plan while the others fight. The GA kids get some backwoods appropriate clothing and collect some food for the trip. They also hit the supply room to get gear for their adventure.

They remember that back at Professor MacPherson’s office there was an invitation to Greenwood Lodge that is dated 1986, although the paper the invitation was written on looks brand new. They search the camp to find information on the Lodge and they begin to come up with a plan. They decide to split up into three teams and enter at different points of the Lodge.

Olive and Jen get their 80’s dresses on and decide to head out of the teen girl’s room they are in to see if they can escape. The other room’s doors seem to have electrified doorknobs so they are unable to find an exit. They discover a den that has a portrait of the Nithercott-Greenwood family: a Mom, Dad and daughter. One of the skull creatures sneaks up behind them and orders them to follow him. As Olive and Jen pass a door they are pulled into a room by a Scottish woman about their age who has a redheaded companion. They are trying to find a way to escape as well. Two more skull creatures enter the room and make all four go to the Salon. They are given the rules: they must commit to the year being 1986 at all times or suffer the consequences.

They are then brought to a dining room with several other guests all around the same age. Olive and Jen explain that they are looking for Professor MacPherson and the Lumberjanes Scout-Master, Rosie and ask if anyone has seen any older people at the Lodge. The Scottish girl is surprised that Olive doesn’t recognize her – she is MacPherson and the redhead is Rosie. They have been placed under a spell to look just as they did when they attended Gotham Academy in the mid 80s.

Two skeleton creatures ask the diners to stand and welcome Miss Louise Nithercott-Greenwood. Louise enters and thanks the assemblage for attending her birthday weekend and declares that they will have a lot of fun. Until next month…

Last month’s installment by writer Chynna Clugston Flores was a gem of on-point characterizations and laugh out loud moments. This month’s entry doesn’t have any of those features. None of the members of either the Lumberjanes or the GA kids really shine. Sure, Maps comes up with a plan and Ripley has energy, but these traits seem a bit by book rather than organic. The argument between the teams as to whether to take action or make a plan also seemed forced. It provided some level of conflict but wasn’t genuine. There were some funny gags about how to find information in a world without the internet, and also both groups of kids are naturally endearing so that goes a long way to making this a fairly good read. The mystery plot does unfold nicely though some of what were supposed to be surprise moments were telegraphed pretty heavily.

The art, with Pencils by Rosemary Valero-O’Connell, Inks by Maddi Gonzalez and colors by Whitney Cogar are in the Lumberjanes, not the Gotham Academy style. The lines are simple and the colors earthy which work well with the outdoorsy location of the tale.

Last month I was over the moon about this crossover. I still think this will be a solid miniseries but this issue was a let down. First of all, it seemed pretty obvious to me that the young Scottish woman and the redhead were Professor MacPherson and Rosie, I was kind of surprised that Jen and Olive didn’t realize it. That pretty much ruined the big reveal for me.

Also, I am more of a Gotham Academy fan than that of the Lumberjanes crew. I’ve picked up a few Lumberjanes trades to get more familiar with that gang so I am more aware of their group dynamics than I was last month. There is so much more to the characters of both squads than there is room to develop. Eight personalities are hard to spend time with when they are only in half the book, the other half being dedicated to Olive and Jen.

Finally, while I know this is a Boom comic, not DC, I still miss the gorgeous Gotham Academy artwork. Olive, Maps and the gang just don’t look the same in these pages as I am used to. I know I am spoiled by Gotham Academy, but still.

I was a little generous out of a sense of surprise and excitement when I gave issue #1 such a good rating last month so I am going to overcompensate the other way this time around. I am still totally on board with this mini, but I think there is room to improve over issue #2.