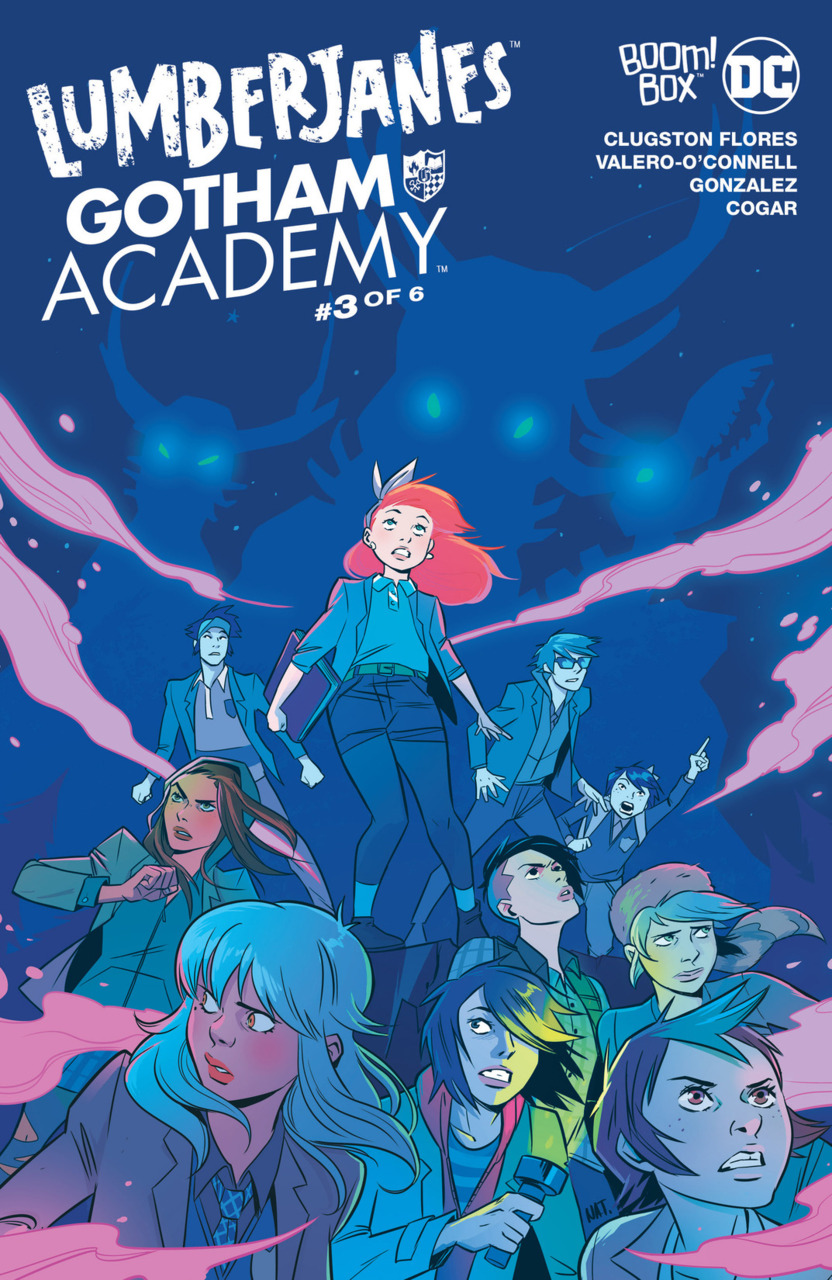 The birthday girl, Louise, gives a toast to the ‘guests’ the skull monsters have collected at Greenwood Lodge. She thanks everyone for coming to her 16th birthday party and notices that someone named Simon is missing. One of the skull monsters tells her that Simon was delayed and is trying to attend the next day. As dinner is served Louise announces that they will be doing something new from Japan, Kar-e-okay.

Outside the lodge, three groups of the Lumberjanes and Gotham Academy kids are trying to get into the building. The first group is attacked by a swarm of spiders that turns into one big spider before they are captured by the skull monsters. The second group is attacked by bats before they are similarly captured. Colton does manage to get off some flairs that alert the remaining kids that there is trouble which enables them to escape a bunch of snakes.

Back at the party the captured kids April, Colton, Molly, Maps, and Pomeline try to escape but the doors and windows are electrified. They are made to dress up in 80’s clothes and attend the party where they find Karaoke going down. They are happy to be reunited with Jen and Olive and surprised at how young Professor MacPherson and Rosie are.

One of the party guests is an old friend of Louise’s. Louise was a happy girl until her parents became rich. She then turned into a spoiled brat and used her money to force her friends to do what she wanted them to. In an effort to send Louise a lesson, her friends didn’t show up to Louise’s 16th birthday at the Greenwood Lodge. Crushed at this betrayal Louise hasn’t left the building in the thirty years since. Olive sees Louise desperately trying to make the party success and senses that she needs a friend.

The party continues with Jo and Colton becoming pals, Olive attempts to bond with Louise, and Pomeline takes an ill-advised turn at the mic. One of the guests gets upset at being imprisoned and yells at Louise. The skull monsters roughly escort him from the party. Apparently the skull monsters look like normal people to Louise and her perception of reality is askew.

Outside, the remaining kids, Ripley, Kyle, and Mal are upset at having failed their friends and are afraid for what is happening to them inside the Lodge. Mal decides that the best way to save them is to surrender. Until next month…

The story by Chynna Clugston Flores is an interesting mystery adventure tale that unfolds well in this issue and over the past few issues. Between the two gangs of kids, however, there is little time for any of the dozen characters to come to the fore. This weakens the impact of the story and makes it hard to really connect with.

The pencils are by Rosemary Valero-O’Connell, inks by Maddi Gonzalez and colors are by Whitney Cogar. The art is much more like that of the Lumberjanes comic rather than the Gotham Academy books. Lumberjanes is a very popular comic book, but readers of this review on The Batman Universe are more likely to be Gotham Academy fans. Unfortunately the art doesn’t do Olive and the gang any favors. Olive doesn’t look wispy and ethereal, but messy and clumsy. Maps doesn’t really look like Maps at all. In issue #2 the Gotham kids got dressed in outdoors clothes. It is often very hard to tell everyone apart particularly Kyle, Jo and Pomeline. It is a constant struggle to figure out who is who all the time. This gets in the way of what could be a much better experience.

I don’t think this is a bad comic and the plot itself is good but one of my pet peeves is when the art gets in the way of telling a story. I don’t mind bad art, or even experimental art that fails. But interfering with the plot and the connection to the characters is a no-no in my book. I absolutely loved issue #1 and had similar problems with issue #2 as I do here. On the strength of the promise of this book I am going to hold off one more time really hammering the score. At least this mini reminds me of how much I miss the main Gotham Academy book and the real Olive, Maps, Pom, Kyle and Colton. They can’t come back soon enough.