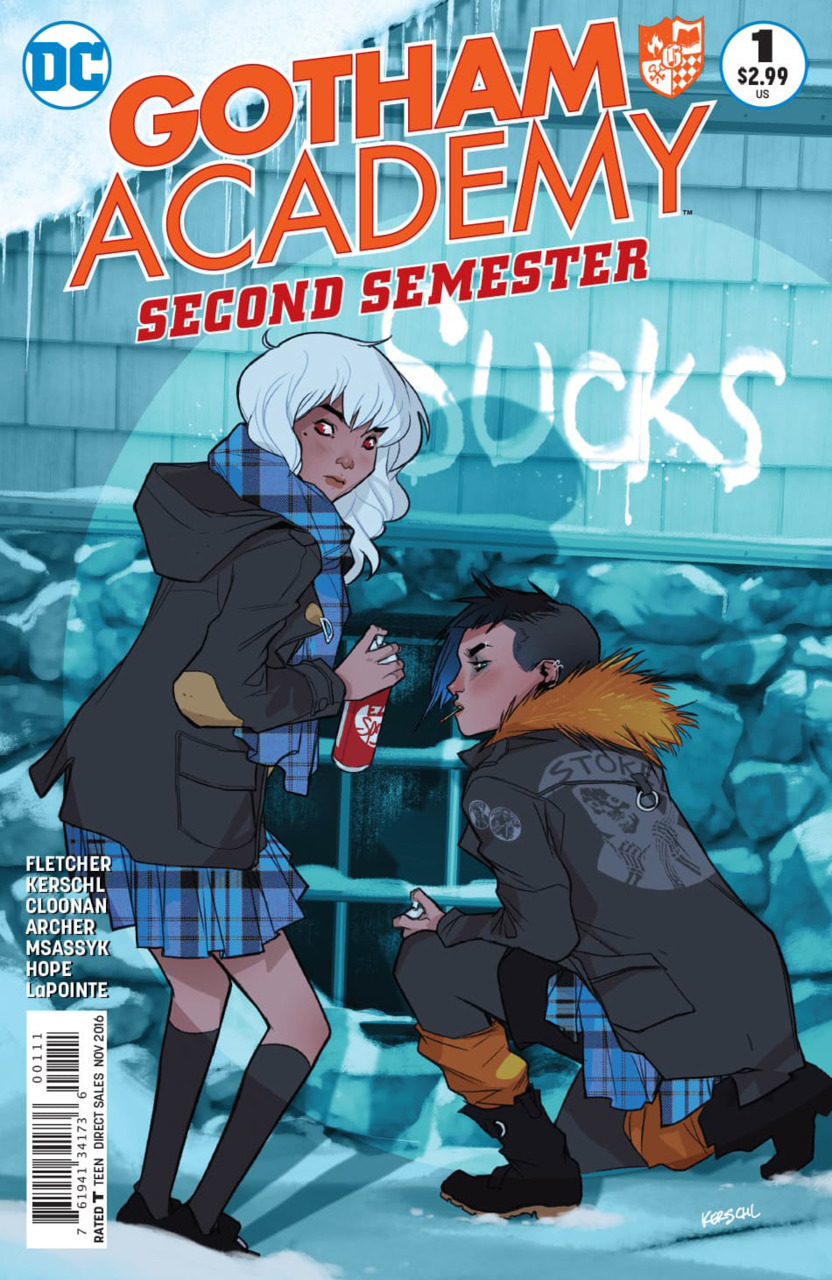 It is the holiday break and Olive and Professor MacPherson are all alone in the empty halls of snow covered Gotham Academy. MacPherson is spending some time with Olive so she doesn’t feel too alone since Olive has no family. MacPherson heads home and promises Olive that she will return the next day with cranberries.

The next day Olive receives a note from MacPherson apologizing for not being able to come visit. Olive comes out of the bath and finds another student, Amy, is going to be sharing her room during the break. The new student is very assertive and insulting which gets Olive’s back up. However, the wounded Olive falls under her sway and the pair go out to explore the campus. They find themselves in the snow outside Professor MacPherson’s office window and Olive is persuaded to throw a rock through it.

Next, they find themselves at the Wedgwood Museum which is off limits to students. The pair break in and Olive’s new friend takes a scissor to an old painting. They find the seance room and the door inexplicably slams shut. Olive faints and when she awakens they find that a friend of Maps, Eric Jorgensen, has found them. Eric has the keys to the museum and shows them some hidden passageways. Also, Old Lady Wedgewood was actually a Cobblepot. In a creepy attic room, they find they symbol for Arkham on the floor. Eric says that the symbols are all over the campus and has mapped them out. There is an unusual pattern that emerges when you put the symbol locations together.

Amy forcibly takes Eric’s drawing pad from him hoping to exploit what he has found. She also finds that Eric has been drawing portraits of Maps and has a crush on her. Eric suddenly has an asthma attack and needs his inhaler. Amy steals his bag and takes off leaving Eric and Olive locked in the room without the inhaler. They are unable to escape so Olive smashes her way through the Arkham symbol on the floor and takes Eric out of the locked room. As the sun comes up they are able to leave the Museum and are discovered by Mr. Scarlet who has Eric’s inhaler. Olive declines to get Amy in trouble but resolves to get even.

At Professor MacPherson’s office Olive learns that Eric is going to be ok. MacPherson apologizes for not visiting with Olive the day before and sends regards from Bruce Wayne. Then car horns can be heard in the distance. The students are arriving back from their holiday. The Detective Club is reunited and Olive is very glad to see her true friends.

First of all, YAY. Gotham Academy is back and the A Team is reunited. Writers Brenden Fletcher, Becky Cloonan, and Karl Kershel deliver a solid one-shot story that explores how vulnerable loneliness makes Olive. Her excitement at the return of the Detective Club members parallels the feelings of all fans of this terrific comic: happy that everyone is back. It feels as if Amy, the troublesome student, is going to be a permanent character and the mystery of the Arkham symbol may be the next story arc. It was a little disappointing that the whole gang wasn’t in the book but it looks as though this issue was a set up for another ‘history of Gotham’ mystery.

Adam Archer is on pencils and Sandra Hope provided the ink work. Msassyk did the background painting. Chris Sotomayor and Serge LaPointe did the colors. The work was up to the high standards of Gotham Academy, which is saying a lot. The colors of the candle while Olive was in the bath were haunting and very creepy. The overall color scheme of the interiors was a dark foreboding orange which contrasted with the blue grays of the outdoor scenes.

I am not going to even pretend that I am able to be objective about Gotham Academy. Gotham Academy is my favorite comic book and I am very happy it has returned. I am not going to over do my rating here as I think this comic will get even better. Yes, because I love this book so much I grade it on a curve which isn’t really fair, but that’s how it goes. If you like your mysteries classically spooky with a team of heroes that are committed to each other, you are going to enjoy Gotham Academy very much.