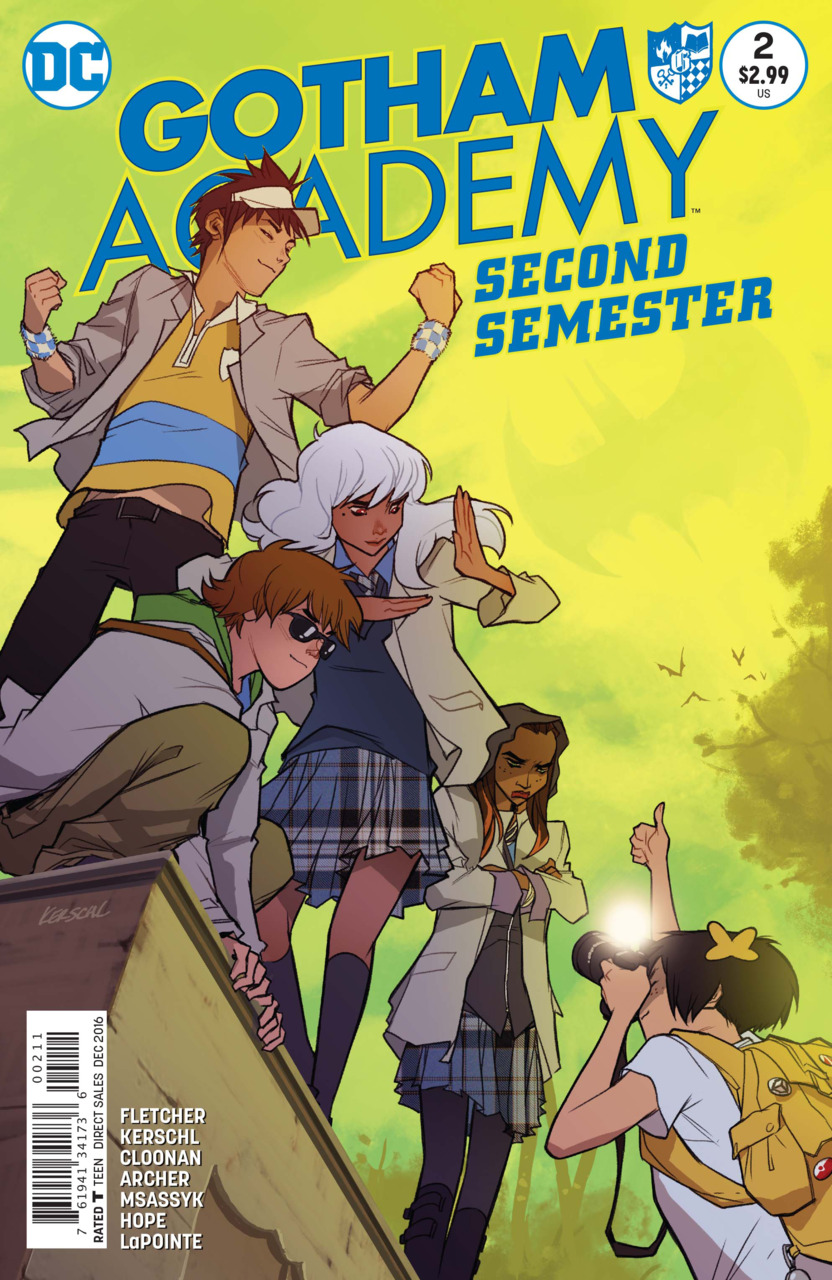 A Gotham Academy student walks the dark and lonely dorm halls looking for her new room. The lights go out and a mysterious woman with a candle tells her not to be afraid and offers to help her find her new room.

It is the first morning of the Second Semester at Gotham Academy and Maps barges into Olive’s room to share her opening day excitement with her best friend. Olive asks her to be quiet though since her new roommate Amy is still asleep. Olive reassures Maps that having Amy as a roommate wasn’t her choice and doesn’t want Maps to feel threatened. Maps puts a brave face on the matter.

As they wait for English class to begin, Olive asks Pomeline if Amy can join the Detective club and gets a ‘no’ for an answer. Strangely enough, despite bad English grades the younger Maps has been promoted into Olive’s class. The new teacher, Mr. Scarlet, is filling in for the missing Professor Pio.

The Detective Club takes their first meeting of the Second Semester in the cafeteria. Maps has had dolls of each of the members made. They don’t have a mystery to solve yet and Maps suggests they go out after class to find one. Olive is unable to go because of her plans with Amy. Maps is upset and sulks off, passing the nervous Eric as she leaves. She also gives Eric one of the dolls and he is touched by the gesture. Pom notices that Eric has written the Arkham symbol in his notebook and demands to know how he knows about it. Eric calls it the Master Symbol. Both are passionate about keeping their knowledge of the symbol to themselves.

In the locker room, Evan is getting ready to take tennis lessons from Kyle. Kyle goes to the court but before Evan can join him the lights go out and the mysterious woman with the candle offers to help him. Kyle waits for Evan but he never shows up on the court and Coach Humphreys says that many kids are missing.

Maps goes out to hang up some Detective Club signs around the school and notices that there is a Witch Club advertising as well. She runs into some of the Witch Club members and they seem zombie like. Evan is among them and walks as if in a trance. The somnambulists parade as a group into the woods. Kyle shows up and tells Maps that Evan didn’t show up for practice. Maps says he went into the woods with the Witches and Kyle follows them. He finds Evan with the group and tries to get him to answer him, but not before the mysterious woman knocks Kyle out with a broom. Maps finds Kyle, wakes him, and runs off alone to find Evan. She finds the Witch Club sitting in a cabin in the woods and the mysterious woman asks if she wants to ‘join the harvest’.

Kyle finds the Detective Club and explains that a coven of witches has taken Maps. The gang drops everything and heads off to find their friend. However, Maps is sitting in the cabin with a dazed look on her face being welcomed into the Witch Club. Until Next Month…

It is terrific to have the gang back. Last issue was good but it was Olive-centric and the book thrives on the combination of the characters and their relationships with each other. Now that they are back together it feels like they never left. Central to the book is the relationship between Maps and Olive, and their friendship is being put to the test by writers Brenden Fletcher, Becky Cloonan, and Karl Kerschl. While Maps is the energetic driving force of the Detective Club she is powerfully motivated by her deep friendship with Olive. There is, however, an age difference between the two and the younger and less mature Maps will certainly be left in the cold sometimes. This dynamic is effectively portrayed in this story.

The pencils are by Adam Archer, inks by Sandra Hope, background painting by Msassyk, with Serge Lapoint on colors. Gotham Academy is one of the, if not the, most beautiful comic on the shelves and this issue continues in that tradition. The play between light and darkness is gorgeous. Light comes through windows, emanates off of candles, and glares in the sharp winter sky. The art in Gotham Academy is something special.

Ok, ok, I know that I am a total Gotham Academy fanboy, it is my favorite comic book on the shelves. The Yearbook issues were creative but didn’t have the moody art of the regular book. The Lumberjanes effort is fun, but doesn’t have the beauty and relationship building we have here. Even the last issue lacked the interplay between the Detective Club characters. It isn’t any one of these elements that I love so much, but the combination that works so well. I am so happy to have Gotham Academy back and in full form I am going to give the issue a half Batarang boost in my rating from last month.