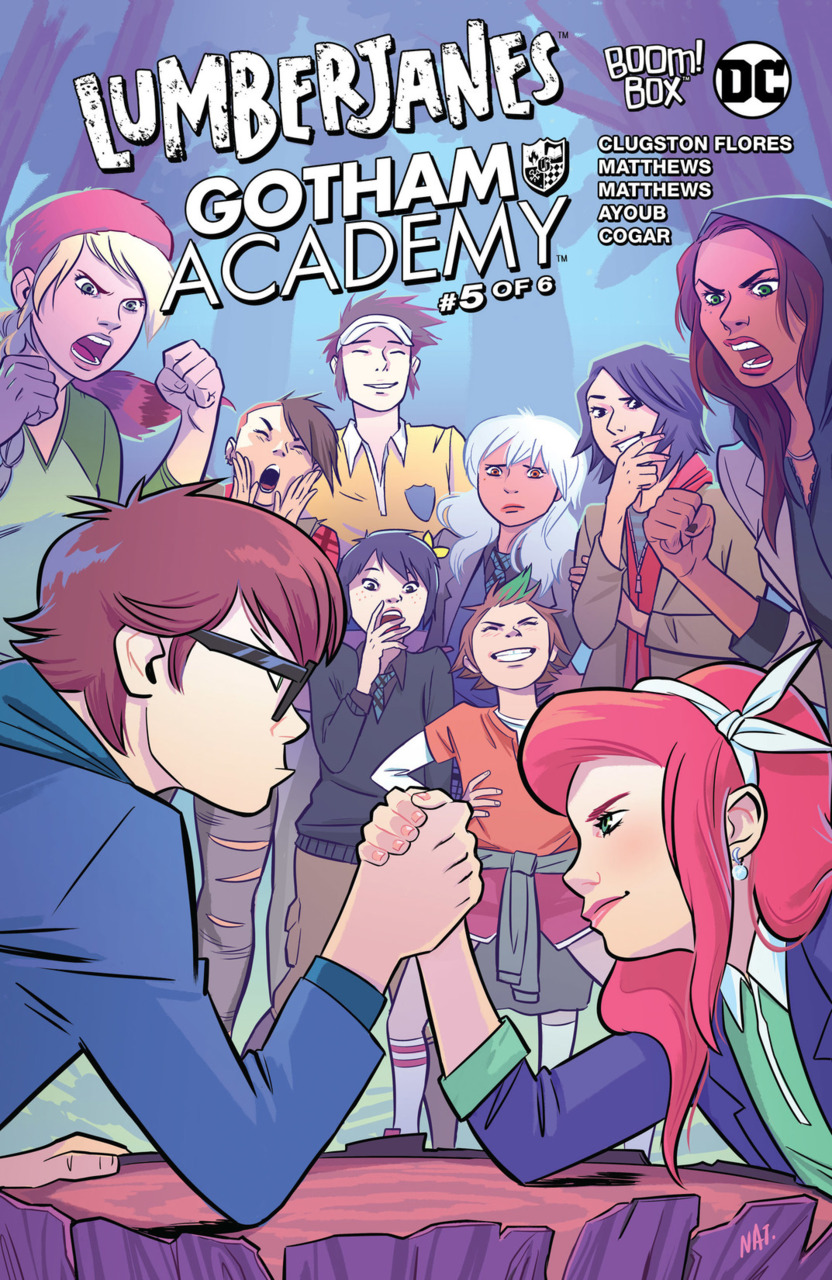 In the last issue, the evil hostess Louise, sees Olive and Kyle (who she believe to be her long lost boycrush) share an intimate moment which sent her into a rage of jealousy. She believes that Olive and the rest of the gang have been plotting against her. Louise directs the Skull Monsters to evict Olive and Kyle from the party. From previous issues being kicked out of the party seems to end badly for the evictee. The creatures begin to shoot Olive and Kyle with an electric ray but Rosie jumps in front of the beam. Luckily the weapon only temporarily incapacitates the recipient. Rosie is ok.

The monsters take flight to attack the party goers. The whole group decides that it is time to fight back against their captors. Jo gets Rosie to safety. Several weapons are tried, bow and arrows, clubs and couches all to various degrees of success. Not only do the kids have to fight the Skull Monsters but all of the stuffed animals in the Lodge come to life and threaten them. Olive and Kyle try to find Maps but are unsuccessful. Ripley jumps on top of one of the baddies and decapitates him with a bat. Professor MacPherson uses the fighting prowess native to Scots to damage a number of the monsters. Maps also has success in using a silver platter to redirect an electric beam to crash a chandelier onto the head of a creature. Colton finds his cache of fireworks which he uses as artillery.

Louise is upset seeing her creatures being defeated. She orders the Skull Monsters to get rid of the kids. The bones from the defeated monsters that are laying around the Lodge collect to form a giant Bone Creature. This amalgamated monster strikes Maps who is out cold. Seeing her dearest friend hurt is the last straw: Olive has had enough. The fireplace comes to life and an angry firestarter-Olive faces down the giant creature with fell purpose.

Writer Chynna Clugston Flores continues her effective story pitting the Gotham Academy and Lumberjanes kids against Louise and the haunted Greenwood Lodge. The mystery has been handled well from the beginning and there are still some outstanding questions that I am sure will be revealed in the next and final installment of this mini.

The pencils are by Kelly and Nichole Matthews, inks by Jenna Ayoub, and colors by Whitney Cogar. Cogar’s palette is very effective. Different rooms have different looks and the colors are full, varied, and rich. The inks are a little too strong, particularly the character outlines. But the action is always clear and never confusing.

I am not sure how many readers of this book are Lumberjanes fans vs. Gotham Academy followers like me. My criticism of this book all along has been that it is difficult to tell all of the characters apart, so many are very similar to each other. That issue remains, but as a Gotham Academy fan it was thrilling to see Olive throw down the gauntlet against the bad guys when she saw Maps get hurt. Nobody, NOBODY hurts Maps when Olive is around. The final full page of Olive surrounded by fire made me stand up, pump my fist, and shout a hearty ‘yeah’. (Pro tip: don’t read comics on a city bus).

I am not sure, though, if Lumberjanes fans will understand what is going on here. Olive’s firestarter powers haven’t been discussed as far as I remember in this mini and I could understand if folks are confused by all the fire everywhere and what it means for the next issue. However, because this issue features my favorite comic book relationship, Olive and Maps, I am going to rate it pretty highly. It is just the breakout event I have been waiting for in this team up.