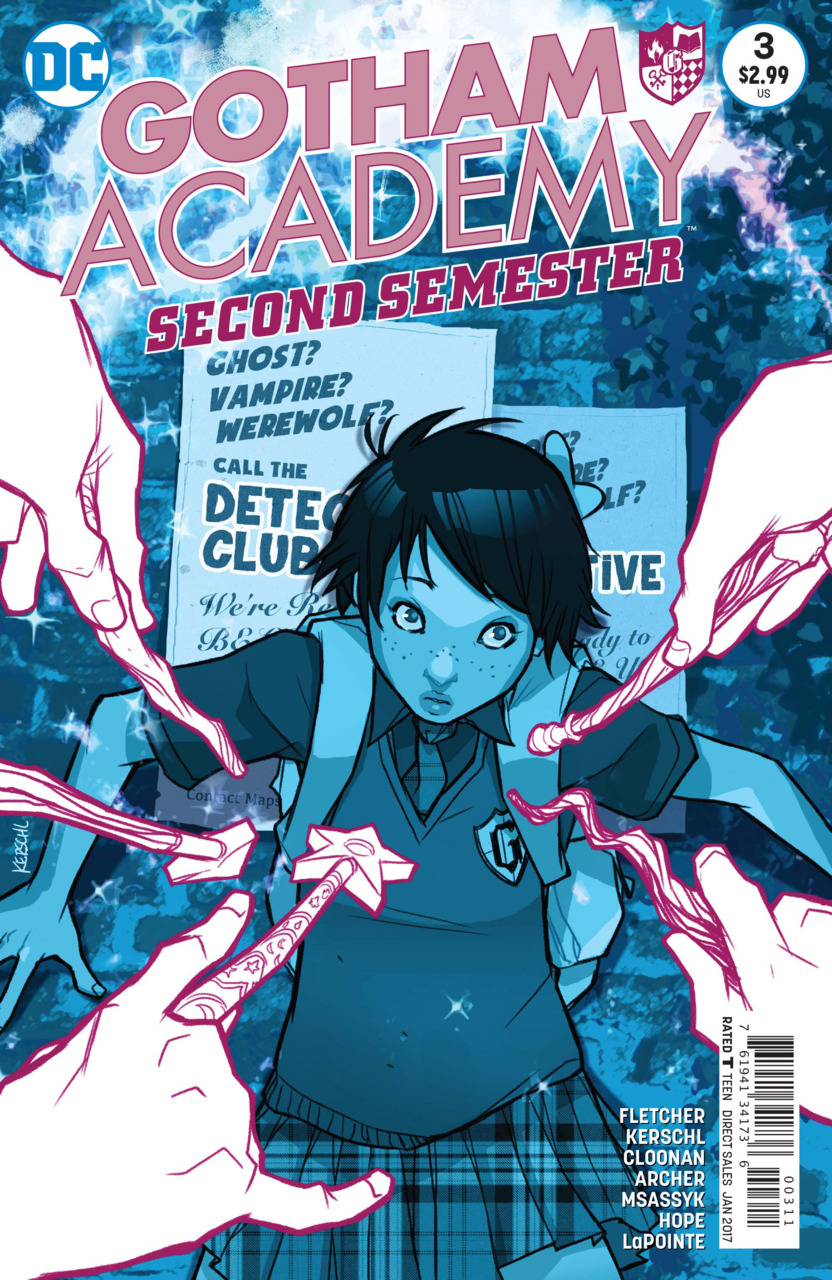 The Detective Club leaps into action to save one of their own while another member faces an uncertain future. Also, Olive has an interesting encounter by the bonfire in Gotham Academy Second Semester #3.

Let me spoil you…

The members of The Witch Club are racing around Gotham Academy stealing books and bringing them to the mysterious Witch from the last issue.

The non-hypnotized members of the Detective Club look on as the Witch, who calls herself Haxan, tells the children to bring the books with the cursed words to her.

Hypno-Maps is in Pomeline’s room where Eric is snooping around. Eric has taken a book from her room, presumably the notebook with the Arkham symbols in it Pom stole from him last issue. Maps grabs the book from Eric and runs away. The Detective Club arrives looking for Maps and decide to follow a hypnotized blond book thief to see if she will lead them to Maps. After chasing the girl through the dorm they finally catch her and remove her witch hat. The girl snaps out of her trance. Colton realizes the hats have electronics that mesmerize the students. Kyle congratulates Colton on his discovery and Colton is very pleased at Kyle’s attention (ship ahoy).

Colton and Pomeline break into shop class to get some tools so Colton can figure out how the hat’s electronics work. They are interrupted by a teacher. Kyle, Amy, and Olive are looking for maps and run into Katherine Karlo, Clayface’s daughter. Katherine has put a piece of herself onto Maps so she always knows where Maps is. Pomeline interrupts the conversation to tell the group that Colton has been taken to the Principal’s office. They decide to save Maps first and Colton second, though Amy votes to let the witches have Maps.

The group runs off into the snowy woods and finds a bonfire in front of a cabin. Haxan and her chapeau’ed minions are around the blaze and throwing the books into it. Olive is transfixed by the fire. Eric has followed the group and rushes into the circle to keep Maps from burning his notebook. Haxan hits him with a broom and Maps incinerates the book. Eric is distraught and threatens to kill someone. Kyle and Pomeline attack Haxan. Amy finds Olive staring into the fire and asks Olive if she the same vision of the Wedgewood House etching (from issue #1).

Eric takes the doll of himself that Maps gave him and throws it into the fire. Katherine pulls Maps’ hat off which un-hypnotizes her. They see that all the witches are attacking Kyle so Maps rushes to her brother’s rescue. Maps pulls Haxan’s hat off and she is revealed to be the missing English teacher, Professor Pio. They take off the student’s hats and the kids awaken.

In the fire, Olive sees her mother, Calamity, who calls out to her. She steps closer and closer to the fire. Katherine turns into clay and smothers the blaze. Mr. Scarlet arrives on the scene and Professor Pio says that this is only the beginning of her revenge for his lies. Scarlet takes Pio to go talk to the Headmaster.

Speaking of Headmaster Hammer, Colton is facing his wrath. Hammer threatens to expel Colton from school. Until next month…

Writers Brenden Fletcher, Becky Cloonan and Karl Kerschl give us the next step in the Gotham Academy story. There seems to be a number of intertwined stories going on in the background of each of the first three issues that appear to be ready to bubble to the top. They mystery of the strange child Eric and his creepy notebook as well as Olive’s hostile roommate Amy. Also, there seems to be something odd going on amongst the faculty. All of this seems to be creeping forward in a controlled and persistent way. The pencils by Adam Archer, inks by Sandra Hope, background painting my Msassyk and colors by Serge Lapointe each contribute to the extremely high level of art that are part of the Gotham Academy experience. The gloomy dorm interiors and luminescent snowy exteriors are as always a pleasure to sit and look at. There is one panel showing the kids using secret passages through the dorms where the soft lighting looks to be actually glowing. The scenes at the bonfire are vivid and look very realistic. This book is beautiful.

I am enjoying Gotham Academy Second Semester very much. Month in and month out it has been a high point of my comics reading. I love the characters and the beauty of the art. Also, the whole setting of a creepy boarding school is right up my alley. I am going to resist rating it too high because I know this book isn’t what everyone likes in a comic, but if you like quiet and creepy supernatural stories this one is for you.