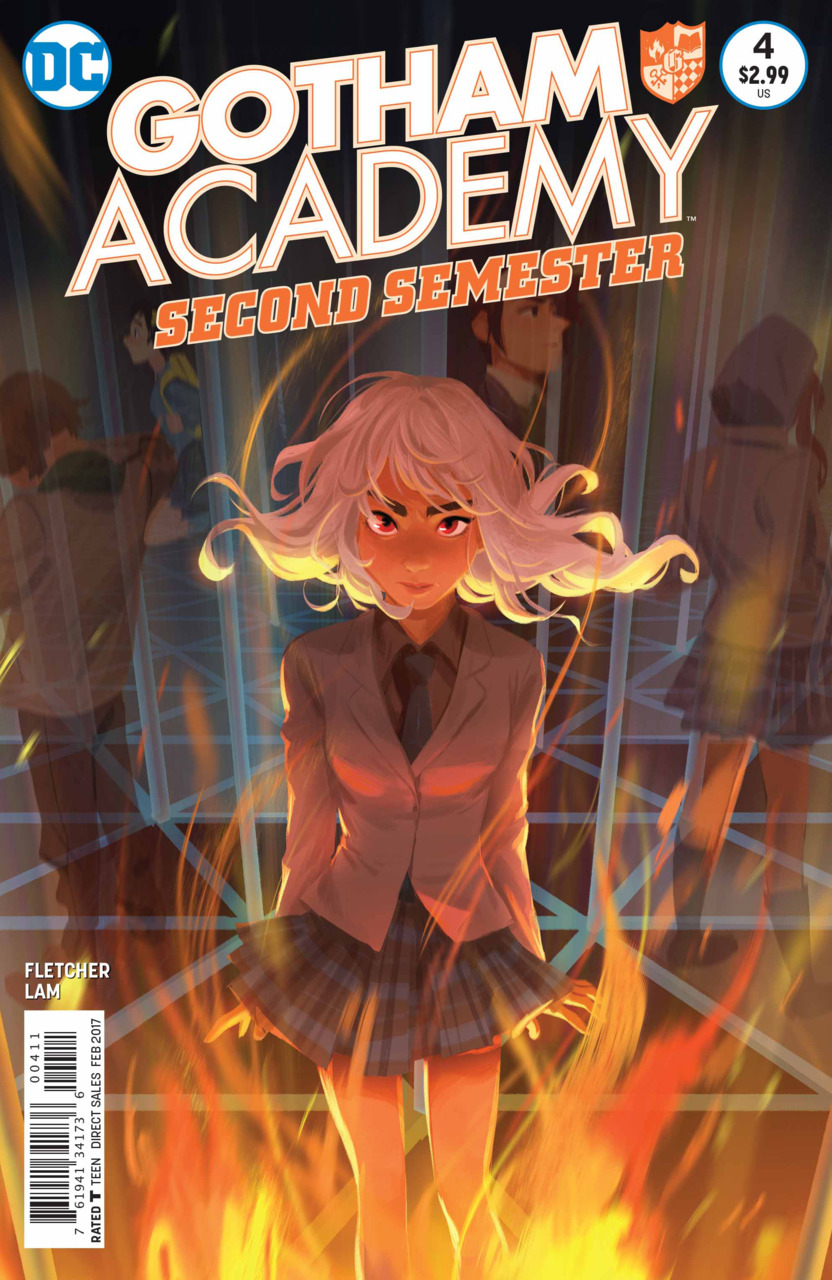 The Detective Club takes a field trip to a spooky carnival but, as usual, things aren’t all that they seem in Gotham Academy: Second Semester #4.

Visit the Hall of Spoilers below…

Our story begins before the start of Gotham Academy Second Semester. Headmaster Hammer is at his desk and hears a carnival barker advertising the Carnival Midnight. He looks down upon the crier disapprovingly.

Pomeline, Olive, and Maps are in the hallway and a strangely dressed student-aged guy hands them fliers for the Carnival Midnight. Olive takes a shine to the young man, but he disappears before they can speak. The Detective Club gang heads to the carnival where they meet the barker, dressed in a red jacket and top hat, advertising the show. Headmaster Hammer stops them before they can go in. He and the barker are acquainted in an unpleasant way. Hammer kicks the Carnival off the school’s premises. The kids realize there is more to their anger and decide to do a little detecting.

In the library, they look through old yearbooks and files in the archives in search of a time when the Carnival Midnight had previously been at Gotham Academy. Looking through the shelves, Olive runs into that same mysterious boy that handed out the fliers. She is smitten with him. Kyle finds a very old photograph of what appears to be a school aged Headmaster Hammer with his arms around a schoolmate named Bray. Seeing the date of the photo and doing the math, the kids are surprised at Hammer’s age.

Olive brings her new friend, Bernard, to meet the gang. Kyle notices the attraction between the two and is jealous. Bernard tells them that the Carnival has set up just outside the academy’s gates and they decide to go to see what all the fuss is about.

The kids arrive at the carnival but are the only ones in attendance. The barker welcomes them. There is an empty animal cage and a sign for the Lair of the Snake Lady. Maps gets the crew to go into the Snake Lady attraction, but Bernard coaxes Olive to go to the Hall of Mirrors instead. Inside she finds the barker who shows her her hopes and dreams in the mirrors. She sees herself as a young girl and also hugging her mother.

Meanwhile at the Snake Lady lair, the gang looks around at the creepy attraction and are attacked by a gigantic, you guessed it, Snake Lady complete with fangs and claws. Maps isn’t frightened of the beast and eggs her on. This doesn’t stop the creature from putting Colton and Poms into the animal cage.

Inside the Hall of Mirrors, Olive notices that Bernard casts the reflection of an old man. She realizes that the barker is up to no good and decides to use her fire starter powers to escape the hall. As she and Bernard leave the inferno she sees Kyle fighting with the Snake Lady. Olive takes a burning stick and chases off the snake. Colton is able to break himself and Pomeline out of the cage. The barker finds the group and takes off his human mask to reveal a greenish demon creature. As he chases the students Headmaster Hammer arrives on the scene and slays the monster with a silver sword. He sends the students back to their dorms.

Hammer comes face to face with Bernard who ages from a teen boy to an old man right in front of him. They had been best friends back in the day. The two greet each other but Bernard turns to dust in Hammer’s arms. Hammer knees in front of the ashes of his friends and tells his spirit to rest, that he is home. The End.

This is an effectively creepy one issue story by writer Brenden Fletcher and artist Jon Lam. The story itself works, but spooky carnival stories have been a successful trope for a long time. The reveal of Bernard as an old man is telegraphed pretty clearly early on, but that doesn’t dull the impact of Hammer having to say goodbye to his old pal. As good as the Detective Club kids are the real star of this story is Hammer. He is the hero, he recognized the carnival as trouble, and he has the role with the most emotional impact. He typically has been in the position of stern taskmaster and it is terrific to see his character expanded.

Lam’s art is different from typical gang that does Gotham Academy. Although the ink lines are a little strong for my taste the overall effect is very pleasing. Olive looks terrific with her white mane of hair, wide eyes and delicate features. The carnival barker is very creepy with or without his human mask, and Kyle’s jealous pouting is adorable. The colors too change from scene to scene and particularly the strong reds and violets in the Hall of mirrors are beautiful.

If you have read any of my Gotham Academy reviews before you will know that I am a huge fan of this series. This issue doesn’t disappoint. It strikes a wonderfully creepy note with one of my favorite settings – the haunted carnival. I strongly recommend this issue particularly to first time Gotham Academy readers since it is a single issue story.