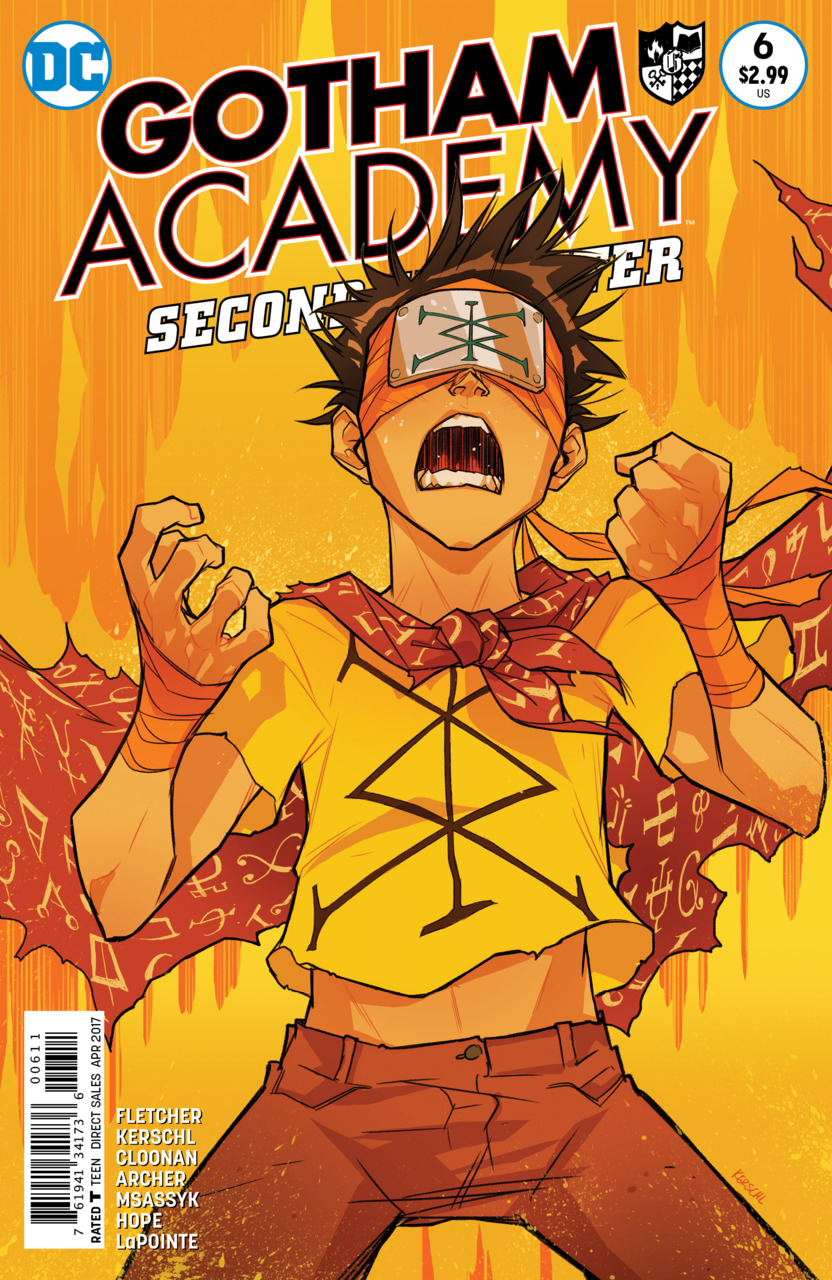 Amy and Olive are sitting on the football field bleachers badmouthing Batman. Maps comes by and says that they should follow Pomeline to Wedgewood house so they can read the map which they hope will keep Colton from being expelled.

Kyle is trying to give Colton a pep talk which turns into a nice friendly hug. Colton obviously wants more from Kyle, but for some reason feels sick. They head off to find the rest of the gang and the map.

Maps, Olive, and Amy look around at the Wedgewood House. Maps has noticed that everything is arranged in thirteens. Everything, that is, except one dresser which has only 12 drawers. She posits that there is a secret compartment, and she is right! Inside they find some goggles that allow the wearer to see secret writing and the same bat mask that they found in the crypt under the tree in the graveyard.

Amy, Olive, Maps, Kyle, and Colton meet up and run off to the graveyard to meet up with Pom.

Poms and Tristan have followed the map to the crypt under the tree in the graveyard. They go inside and find an ancient sarcophagus. Tristan uses his super bat strength to open it and the pair peer inside. There is a deep well going downwards. They descend into the hole and find a number of skulls at the bottom. The bricks in the wall separate and reveal a door into a room that has tunnels off in all directions. There are symbols all along the walls and on the floor. Poms references Millie Jane Cobblepot’s diary to see if she can decode the symbols.

Pom realize that the symbol on the floor is the center of the mystery. Suddenly the young student Eric jumps out with a cape and mask on, tells them that there is a keyhole in the floor. He reveals that he knows this because he is the Symbolist. Apparently, the Symbolist is some kind of super hero or villain or something. Eric shoots a special gun that launches ropes that entangle Tristan. Pomeline turns her key in the keyhole and the floor begins to fall away.

The rest of the Detective Club arrive and Pom says that if they want to join the adventure they better jump down because they are dropping fast. Eric goes to attack Pom but Tristan bites him. Eric pushes him off the edge of the falling floor and Tristan plunges to the abyss below.

Olive is angered and as Amy eggs her on her eyes fill with fire. Until Next Month…

While there is considerable progress made in Brenden Fletcher, Becky Cloonan, and Karl Kerschl’s story it seems that the pace is beginning to drag. There is precious little positive interaction between the Detective Club members, except for Kyle and Colton. Pomeline and Tristan just snipe at each other. The interplay between Maps and Olive is the heart of Gotham Academy but they seem to be just talking at each other and not engaging. This could very well be because of the influence Amy has upon Olive, but the narrative approach is beginning to wear thin.

If you aren’t interested in speculation about some of the things going on in this story arc, please skip this paragraph. As pointed out by Ian Miller in some of the comments on past reviews, there is an idea that Amy is really a figment of Olive’s imagination or perhaps a spirit that only Olive sees. I won’t go back to previous issues to break down where this comes from, however the theory is supported in this issue. On page 1 when Maps meets Olive and Amy on the bleachers Maps sees that there is a Bat symbol carved into the wood. Maps asks Olive if she carved it, and doesn’t ask the mischievous Amy if she was the culprit. Even though Amy is with Olive the whole issue, no one ever mentions her, alludes to her presence, or calls her by name. And when Maps and Olive discuss the ghost of Millie Jane Cobblepot, there is a cut in of a strangely grinning Amy.

The art is by the team of Adam Archer, Msassyk, and Sandra Hope. It is of the high quality we have come to expect in Gotham Academy. There are a number of very gloomy scenes and sadly few rich pages giving an overall dull effect.

I am a big Gotham Academy fan so I am going to be lenient in my grading, though I am not entirely pleased with how things are progressing. I am hopeful for the future of the story because there seem to be some big revelations coming. I also think that the mystery of Amy is clever and makes for fun speculation. The relationship between Olive and Maps needs to be strengthened however. Otherwise Olive is just a gloomy emo firestarter and Maps is a spunky but single note character. Their strength is in their relationship and we need to get back to it.