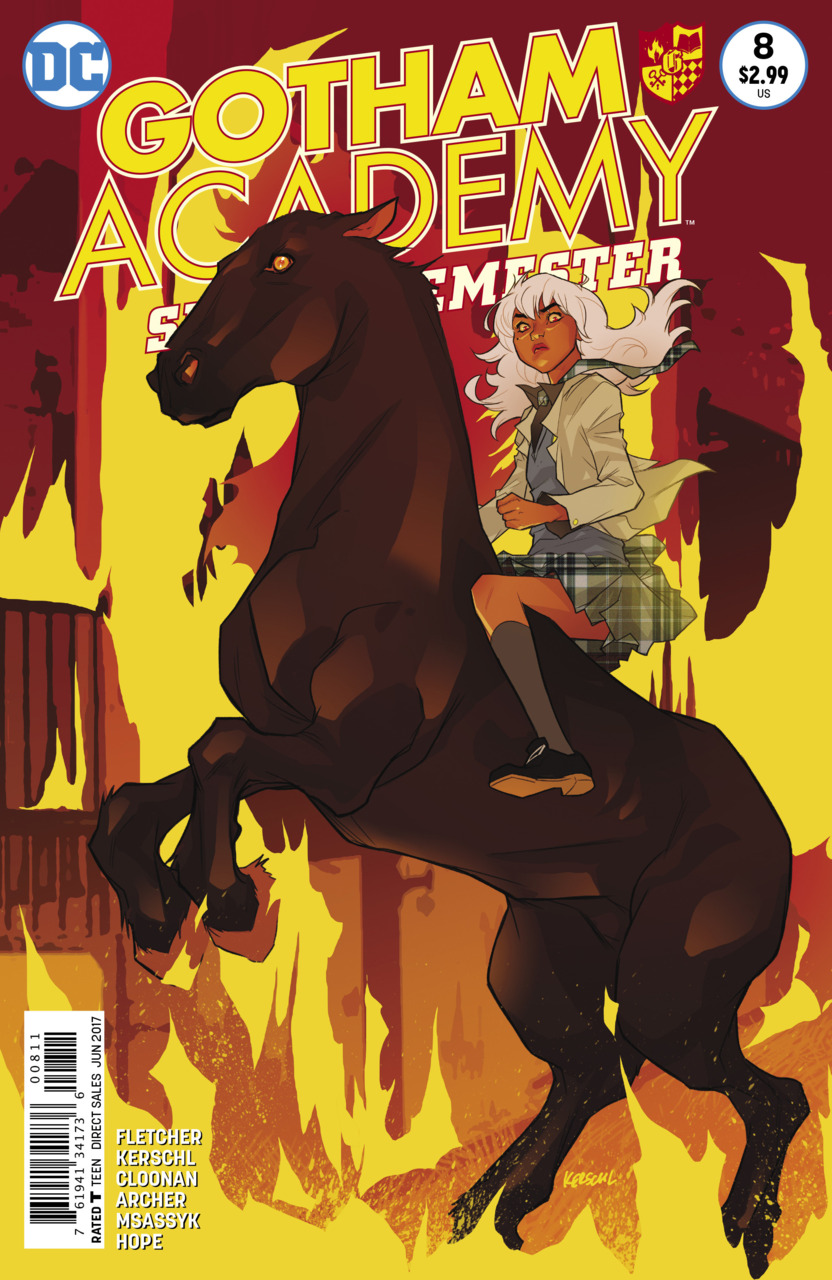 Olive is possessed by the vengeful spirit of her ancestor Amity Arkham and threatens to wreak havoc on Gotham Academy. Can Batman stop the destruction without hurting the teen? Find out in Gotham Academy Second Semester #8.

The Plot: Olive has been possessed by the spirit of her ancestor, Amity Arkham. She is having a full fire starter flare-up and preparing to turn her combustible wrath upon Batman and Professor MacPherson. She believes that the pair have betrayed her and that Batman killed her mother. In reality, Batman was trying to protect Olive and enlisted MacPherson into keeping an eye on the orphaned girl. Before she can rain fire down upon them she is knocked over by MacPherson’s dog Ham.

Pomeline and Colton awake in the subterranean cavern tied up. Mr Scarlett, or Bookworm, has taken the Book of Old Gotham from the students. He is threatening to kill the pair with the power of the magical tome. An amorphous creature creeps out of Colton’s backpack and starts to work on the pair’s knots.

In the book, Bookworm reads the story of Amity Arkham who was seized by the townspeople of old Gotham and burned at the stake as a witch. Amity cursed the citizens of the town and their descendants. Amity’s infant child was protected by her dearest friend, Alienor Frych. Alienor gave the baby, Beatrix, to the Silverlocks, an elderly country couple. Alienor then wrote the Book of Old Gotham describing the terrible things that were done to her friend Amity.

Olive regains her fury at Batman and MacPherson whom she had trusted and now believes betrayed her. Before the flames fly Maps and Kyle arrive. Maps is shocked at Olive’s appearance and the siblings tell Olive that they will help her however they can because they and the other members of the Detective Club are family.

Back underground, Pomeline tells Bookworm that the book belongs to her and her family. Bookworm looks for a spell to bring death to those who would do him harm. As he searches Poms and Colton are untied by the unusual creature from the backpack. The creature turns out to be Katherine Karlo, Maps’ roommate and Clayface’s adorable daughter.

Bookworm chants the spell. As he does Olive feels her firepower subside and she collapses. The flames of Amity’s vengeance come out of the Book of Old Gotham and begin to descend upon Colton and Pomeline. Before it does, the fireball senses the Arkham necklace around Pom’s neck and recognizes the descendant of Amity’s daughter’s savior as a friend. The flames turn on Bookworm and Pomeline shuts and seizes the tome before he can be hurt. She then uses the magical volume in a more percussive fashion against the teacher.

Back above ground, Olive begins to get her fire on again. Pomeline and Colton arrive to see her friends watching Olive fighting, and winning, against Batman. Pomeline calls Amity, who recognizes her as Frych. Poms gives Olive the book but Batman wraps her up with a batarang lasso. Olive then disappears into thin air.

The Detective Club wonders where Olive has gone and Pomeline tells them that Amity is going to track down and kill the ancestors of those that burned her at the stake. They look up to a red flaming sky over Gotham and the Batsignal calling for the Caped Crusader’s help.

Breakdown: The long, slow burn of Gotham Academy’s Second Semester finally explodes in this thrilling installment. Writers Brenden Fletcher, Becky Cloonan, and Karl Kerschl pull the curtain off the story they have expertly crafted over the past sixteen issues. It is clear that the writers have been playing a long game here and in this issue it pays off in spades.

As always, the art in Gotham Academy sets the standard for excellence. The pencils are by Adam Archer and Msassyk, inks by Sandra Hope and Msassyk and colors by Msassyk. The flame panels in this issue, which are legion, have a vivid quality that expresses the kinetic power of the blaze. These pages contrast with the chilly blues and greens of the underground cavern and the colorless flashbacks to old Gotham. So much care is taken with the backgrounds in the Gotham Academy books and this issue is no exception. They give the panels a cinematic quality that is a joy to look at.

One criticism of the art is the initial depiction of Katherine Karlo. When she emerged from the backpack she looked like a blotch on the page. It wasn’t until they actually called said blotch by name that the development was clear. Katherine could be developed into a great character, though she deserves a better treatment than she is given in these pages.

My Take: As readers of my reviews know, I am a big fan of the Gotham Academy series. The spooky boarding school, mysterious books, hidden passages, and creepy school staff are the center of my personal wheelhouse. Also, stories involving the sinister history of Gotham always are close to my heart.

I have been critical of this book for the past few issues because the progress of the plot had been so slow and ponderous. Also, the relationship between Olive and Maps, which to me is the central core of the book, had been missing. While that relationship is only slowly coming back to the fore, the connection between Olive and Pomeline and their families makes up for much of that weakness. The seeds are now planted for the true saviors of Gotham (and Olive) to be Maps, Pomeline, and the rest of the Detective Club.

Seeing Olive, in her perfectly straight plaid skirt and knee socks, standing over a downed Batman gave me quite a chuckle. When Olive disappears from Batman’s lasso, Pomeline looks at Bats and says ‘No! Shes gone’ but I imagined that she followed by saying to him ‘…you idiot.’ A fantasy perhaps, but that shows you how wrapped up I am in these characters and this story. If you are a fan of magic, mystery, and undying friendship I recommend this book to you wholeheartedly.