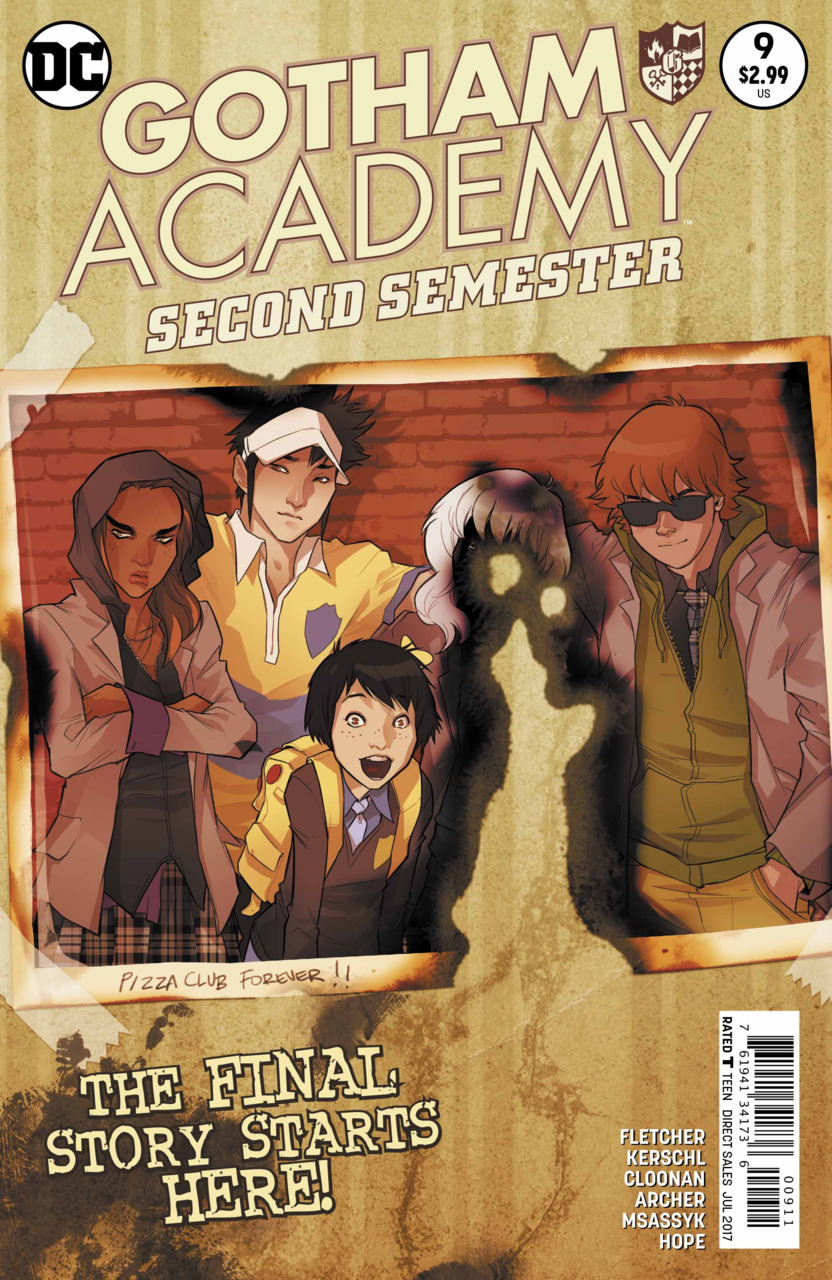 Amity Arkham possesses Olive in order to go on a fiery rampage of vengeance against the descendants of the colonial Gotham families that burned her as a witch in Gotham Academy: Second Semester #9.

The Story (spoilers ahead): Olive/Amity is prowling Gotham setting fire to the homes of the descendants of those that burned Amity on the stake for witchcraft in colonial Gotham. She is standing outside the ancestral Dent house which she has set ablaze. She is trying to lure Harvey Dent, Two-Face, to the home so she can exact her revenge upon him.

Gotham Academy has sent the bulk of the student body home because of the danger Olive/Amity poses to Gotham. Maps, Pomeline, and Colton see the students leaving. Kyle says that he too is leaving. Maps is crushed that her brother is going to abandon Olive in her time of need but he leaves for Metropolis anyway.

Maps, Pomeline, and Colton return to the underground cavern to look for the bones of Amity Arkham. They believe that if they can locate the skeleton they can somehow exorcise the demon from Olive. They head down the well and stand atop the gigantic pile of bones. A female Gotham Academy student wearing a shark mask, jumps out from the bottom of the skull pile. She races through a secret door in the wall and locks it behind her. Suddenly the well begins to fill up with water. They attempt to get to the top of the well but two other girls with masks of fox and crow seal them in the hole.

Harvey Dent returns to the fire ravaged home of his ancestors. Olive/Amity is there waiting for him. Amity causes flames to burst out all around her and declares she will take revenge on the Dents. Harvey pulls a gun on her, but it bursts into flames. Amity sees that half of Harvey’s face is burned and asks who did it to him. He replies that it was Gotham that betrayed him, that he has suffered and lost everything. Olive is able to take control over her body and is disoriented. Harvey starts to get them both out of the burning house.

Back in the well, the water level continues to rise. Luckily Colton has Hydrofluoric acid that he brought along in case he had to do a DNA match on Amity’s skeleton. The acid weakens the top of the well and the students are able to kick their way out.

Harvey has taken Olive to a Gotham City lighthouse. Olive tells him that she is going to get revenge on the descendants of those that hurt Amity. Harvey mentions the Cobblepot family which begins to bring Amity to the surface.

Back in Gotham Academy, Professor MacPherson warms up her cold and wet students. They discuss the kids in the shark, fox, and crow masks. They find that these masks are reminiscent of an ancient and outlawed student group called The Terrible Trio. The Trio had a reputation of causing chaos on campus back in the 19th century. They were rumored to be protecting a secret that lay at the heart of Gotham Academy. Maps sees the three masked students out of a window and goes off to investigate.

At the lighthouse Harvey Dent is coaxing Amity to the forefront of Olive’s psyche. He takes her to get revenge on Oswald Cobblepot, The Penguin, because he wants revenge on him too. They descend the stairs of the lighthouse but Kyle is there too, listening.

Breakdown: Writers Brenden Fletcher, Becky Cloonan and Karl Kerschl begin the final stage of this Gotham Academy adventure. Their decision to have Harvey Dent manipulate the obviously troubled Olive to take vengeance upon his own enemies rings very true and is unsettling. Dent is a charming predator and seeing Olive ensnared in yet another web raises the stakes, our heroine is in more and more trouble.

The rest of the Detective Club are separated from Olive but they are fighting to help her. Their commitment to their friend is heartwarming and the pieces are in place for them to, hopefully, come to Olive’s rescue.

One slight misstep in the story was having Kyle leave the group to go to Metropolis. Pomeline assures Maps that he will be back, but it isn’t’ clear if he decided to search for her on his own or had a change of heart. It didn’t sound like Kyle and seems a little heavy handed from a storytelling standpoint. Also, having Colton have some acid handy to save the day seemed a little Bat-utility-belt-ish, unrealistic.

Adam Archer and Msassyk are on pencils, Sandra Hope and Msassyk are on inks, Msassyk does the colors, Rob Haynes did the breakdowns, and Steve Wands does the lettering. This issue maintains the extraordinarily high quality of art as fans of Gotham Academy have come to expect. The rendering of the fire looks beautiful and real. You can almost feel the heat come off of the pages. The backgrounds in particular are very well done, it is one of the very best looking comic books on the shelves today.

My Thoughts: The first thing I have to say is how sad I am that Gotham Academy is coming to an end. It is my favorite comic book currently in production and I am going to miss it very much. I am savoring every issue until the end. I am anxious for Olive’s friends, particularly Maps, to come to her aid. This book is all about the healing power of friendship and I am hopeful that this will continue to be the case as the story wraps up.

I am not going to pretend to be objective in my rating. I am going to ding the score a little because of the couple of narrative missteps, but it still has my full recommendation. I love this book and if you like stories about spooky old schools, vengeful spirits and witchery, I think you will love it too.