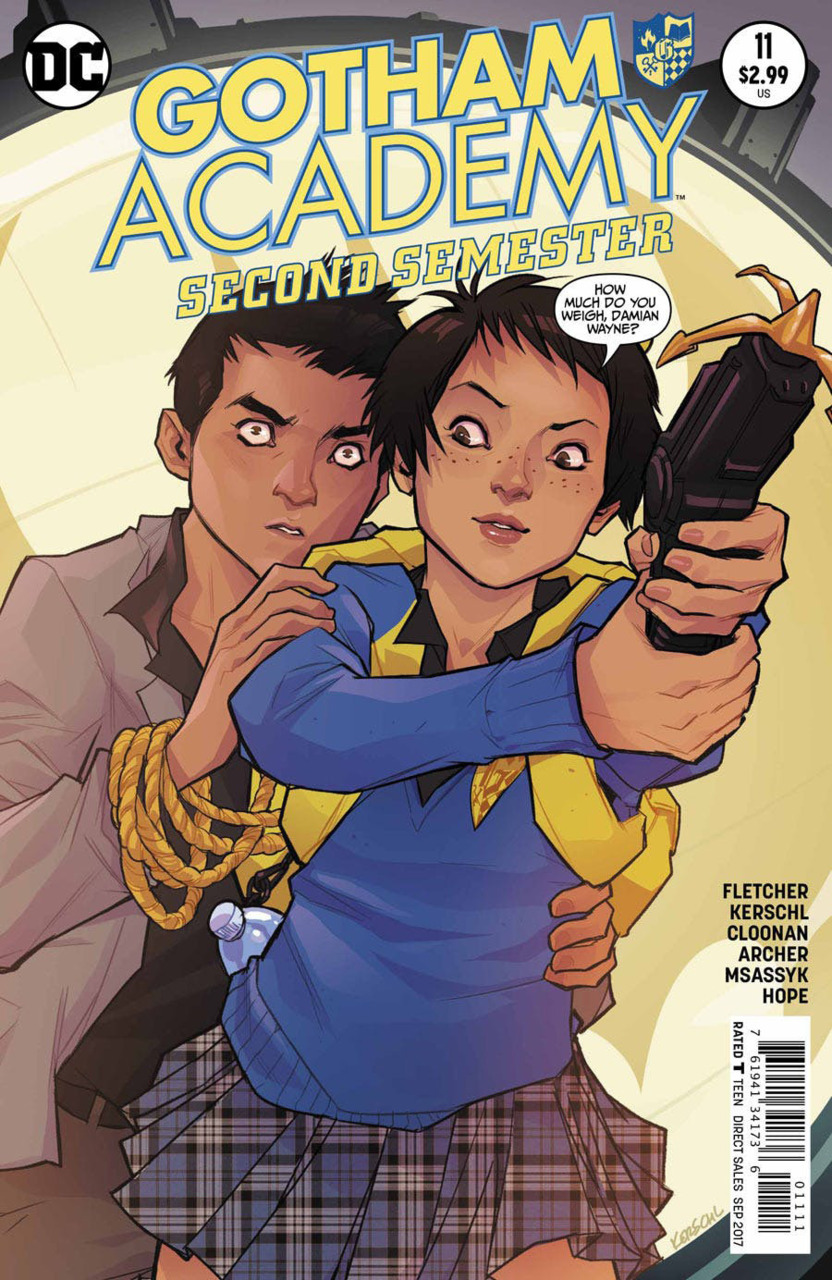 Has Maps given up on her friendship with Olive? Will the Detective Club be able to help their fiery member? What secrets about Olive’s past does Stately Wayne Manor hold? Find out in Gotham Academy Second Semester #11.

The Plot (spoilers ahead): The Detective Club members are at the bedside of one of their own, Kyle, who has been badly burned by Amity/Olive’s fireball. Maps doesn’t want Olive anywhere near her brother. She blames Olive for Kyle’s injuries and rethinks her friendship with her silver-haired friend. Maps is angry that Olive is such a high maintenance companion and tells her that she seems to hurt everyone around her. Olive leaves the infirmary in tears at Maps’ accusations but the Terrible Trio are waiting for her and call to Amity Arkham to take over Olive’s body.

Kyle tells Maps that there is something related to Millie Jane Cobblepot in a vault in Stately Wayne Manor that can save Olive from Amity’s possession. Maps, Pomeline, and Colton head over to the Wayne house and find the door unlocked and the house seemingly empty. All is not how it seems however and Colton and Poms are grabbed by two of Two-Face’s men who are in the house looking for the same thing the Detective Club is. They mistake Colton for Damian however.

The real Damian quickly and quietly grabs Maps and tells her that they have to team up to stop Two-Face. He takes Maps into a hidden armory where he takes a Katana and gives Maps a Bo Staff. Maps prefers the sword however and they trade weapons. Damian easily defeats one of the goons but the other pulls out a gun. Maps uses the Katana to cut the weapon in half. Damian finishes the job by bonking the goon’s noggin with the Bo Staff.

Two-Face has Poms and Colton tied up and has a gun on Damian. Maps has both the Bo Staff and the Katana. Two-Face goes to flip a coin to decide the kids’ fate but Maps throws the staff to Damian and Colton squats so Poms can deliver a firm kick to Two-Face’s back. Damian finishes him off with the long stick.

The kids are freed and the bad guys are tied up. Damian tells the gang that the GCPD are en route and that the kids should get back to school. The three tell him about the info they need regarding Millie Jane Cobblepot but Damian sends them on their way. The friends are walking through the woods outside Wayne Manor when Robin drops in on them. Robin says that he ‘heard’ about Maps’ heroism and gives her the information about Millie Jane Cobblepot. It is a box that contains blueprints and diary pages. There is also a photo of Millie Jane with Lydecker Fox, one of the original Terrible Trio, along with another girl in motley.

Robin asks if they are trying to save Olive. Maps says they have to bring Olive down before she is beyond saving. In the distance there is a fiery explosion, Olive is at it again. Robin tells Maps that she has to make a choice: leave Olive to the evil inside of her, or be a hero and save her old friend. To drive home the point Robin gives Maps a Robin-Mask. The girl is taken aback by the gesture but decides to embrace her heroic nature. Until next time…

Breakdown Dead Ahead: Writers Brenden Fletcher, Becky Cloonan, and Karl Kerschl move us closer to the end of the Gotham Academy story line. The next issue is the last. Over the course of the past few months the conflict between Olive and Maps has been brewing but hurting Kyle was the last straw for the protective Maps. In this issue we have finally seen the inevitable breakup of the two friends as well as the stage being set for their rapprochement (hopefully). Is there enough time left for the writers to bring the two friends back together? Is that the plan or is there something else in store for us? Their relationship is the glue that holds this story together and their split needs to be addressed for this tale to end satisfactorily.

Between the fighting and friendship crises, there is a lot of humor in this issue including several Game of Thrones references (“You know nothing”, stick them with “the pointy bit”). Also, the team up of Maps and Damian is a bullseye. The pair are great together.

Pencils are by Adam Archer. Inks are by Sandra Hope. MsassyK delivers the backgrounds and colors. Rob Haynes is on breakdowns, and Steve Wands is the letterer. The art in Gotham Academy is always solid and this issue is no exception. We haven’t seen the vivid fiery colors that are in some issues for a while now. However, based on the final page we are in store for some pyrotechnics in the next and final (sniff) issue. Overall, this and the previous issue had more moody blues and creepy greens. However, there is a panel that depicts Maps fantasizing about the Stately Wayne Manor armory that is full of pinks and hearts. It is a welcome addition.

My Take: First of all, let’s get something out of the way: I am not happy that Gotham Academy is ending. That being said, it would be soul-crushing if the story didn’t end with Olive and Maps being friends again. I am concerned that there isn’t enough time for the pair to rekindle their friendship in a satisfying way. I am praying to the old gods and the new for them to make up. However, it is a stone cold delight to see the issue end with Maps wearing the Robin Mask. Maps has the soul of a Robin and I have read more than one theory that she could perhaps join the Bat Family in this capacity some day. Oh yes, she could.

I am going to give this issue a good rating because, for all the books problems, it is my absolute favorite by a lot and I’m just an idiot that way.