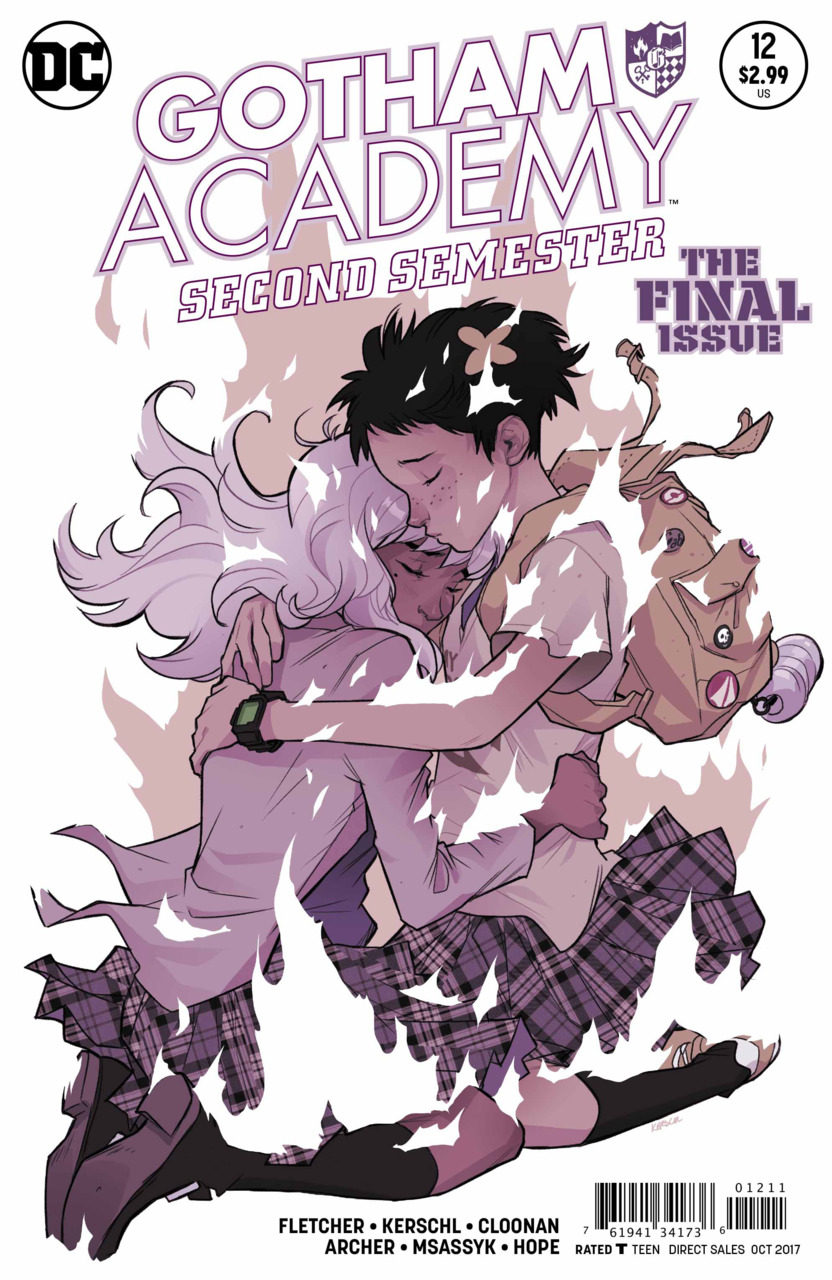 Overview: Can Olive finally overcome her possession by Amity Arkham? Will she and Maps finally reconcile? Can Gotham be saved from the fiery inferno? Find out in the conclusion of Gotham Academy: Second Semester.

Synopsis (spoilers ahead): Olive is struggling against the control of the fiery and destructive spirit of Amity Arkham. She is in a clearing in the woods and the Terrible Trio are chanting to increase Amity’s power. Olive suddenly takes control of herself and leaves the clearing, breaking the spell.

Later, Pomeline, Colton and Maps survey the scene. They see that Olive ran away from the ceremony. This clearing is a sacred spot since it sits at the convergence of ley lines and equidistant from Wayne Manor, Gotham Academy, and Arkham Asylum. They realize that Amity wants to burn Gotham to the ground for what its colonial ancestors did to her.

Gotham Academy is being evacuated because of fire. Olive and Kyle are reunited at the school but when Olive realizes people are frightened of her she runs away from them into the school. Pomeline realizes that her ex, Heathcliff, used to sing an old song that makes her deduce where Amity’s bones are hidden and runs off to get them.

Pomeline and Colton find Millie Jane Cobblepot’s crypt that they realize actually hold Amity Arkham’s bones. The Terrible Trio is in the crypt chanting over her bones. Pom grabs the Book of Gotham from Amanda. Kyle delivers a solid backhand to release the tome from Amanda’s grasp. Colton grabs the box of Amity’s bones and sets off a smoke bomb. The Detective Club members are able to escape with the book and the bones.

Olive is in a school building and accosted by the ghost of Amity Arkham. Olive moves to jump off the stairs to the floor far below threatening to kill herself, Amity’s last ancestor. This will end the generational terror of Amity. Before she can make the leap, Maps crashes through the ceiling on a rope to defend her friend.

Maps tells Olive that she knows she is doing bad things because she is controlled by Amity and not evil in herself, but she is still dangerous. Olive runs off, upset that her best friend is afraid of her. They would all be better off without her, she believes. Maps insists that they are best friends and that together they can beat this possession. Olive leans back on the stair banister and it gives way sending her to the floor. Maps gets her rope and jumps after her friend. She is able to grab Olive’s hand and stop her descent. Olive remarks how good Maps is at saving people.

Pomeline, Colton, and Kyle chant over Amity’s bones are are able to draw her spirit out of Olive.

The ceremony has freed Olive from Amity’s possession. The Detective Club members reunite and savor their victory. Olive reflects on the rich life she has between her friends and the school. She is surrounded by people that care for her, and who she considers to be her family.

Analysis: Writers Brenden Fletcher, Becky Cloonan and Karl Kerschl bring this story of Olive Silverlock to a successful conclusion. Olive and Maps are best friends again though their split and subsequent rapprochement seemed quick and heavy handed. The pacing of the last three issues or so seemed off, but we have returned to the status quo which is a good sign for those of us who are hopeful for an eventual continuation of these characters. This issue had the Detective Club running from place to place to track down Olive which seemed a bit like filler. There were two sacred chanting places, why not combine them into one?

However, seeing Maps crash through the roof of the building on a rope wearing a Robin mask to save Olive was worth the price of admission. Those who believe that Maps is an eventual Robin-in-Training will be heartened by her acrobatic derring-do.

Adam Archer is on pencils, Sandra Hope on inks, MsassyK is on backgrounds and colors, Rob Haynes is on breakdowns and Steve Wands does the letters. Gotham Academy fans have come to expect the best art in Gotham, though recent issues have been relatively pedestrian. The fiery colors are gorgeous in this issue however. The Terrible Trio is often shown in silhouette which contributes to a creepy effect overall. The page where Maps saves Olive from falling was gorgeous, and frankly this is what we fans of this book have been waiting for, for a very long time.

Final Thoughts: I am not objective about the series Gotham Academy, I love it. It has had its missteps, some of which have been serious, but at its heart is everything I love about comics. I love the creepy boarding school setting, the fantastic characters, and gorgeous art. Maps is one of the best new comic book characters in recent memory and I am hoping she goes on a journey to eventually becoming Robin. But I don’t want her to go on this alone, the friendship between her and Olive is lovely and I want it to continue. Olive isn’t as fleshed out as Maps is, and needs to grow out of that emo teen vibe, but I’d love to see her keep and struggle with her firestarter powers.