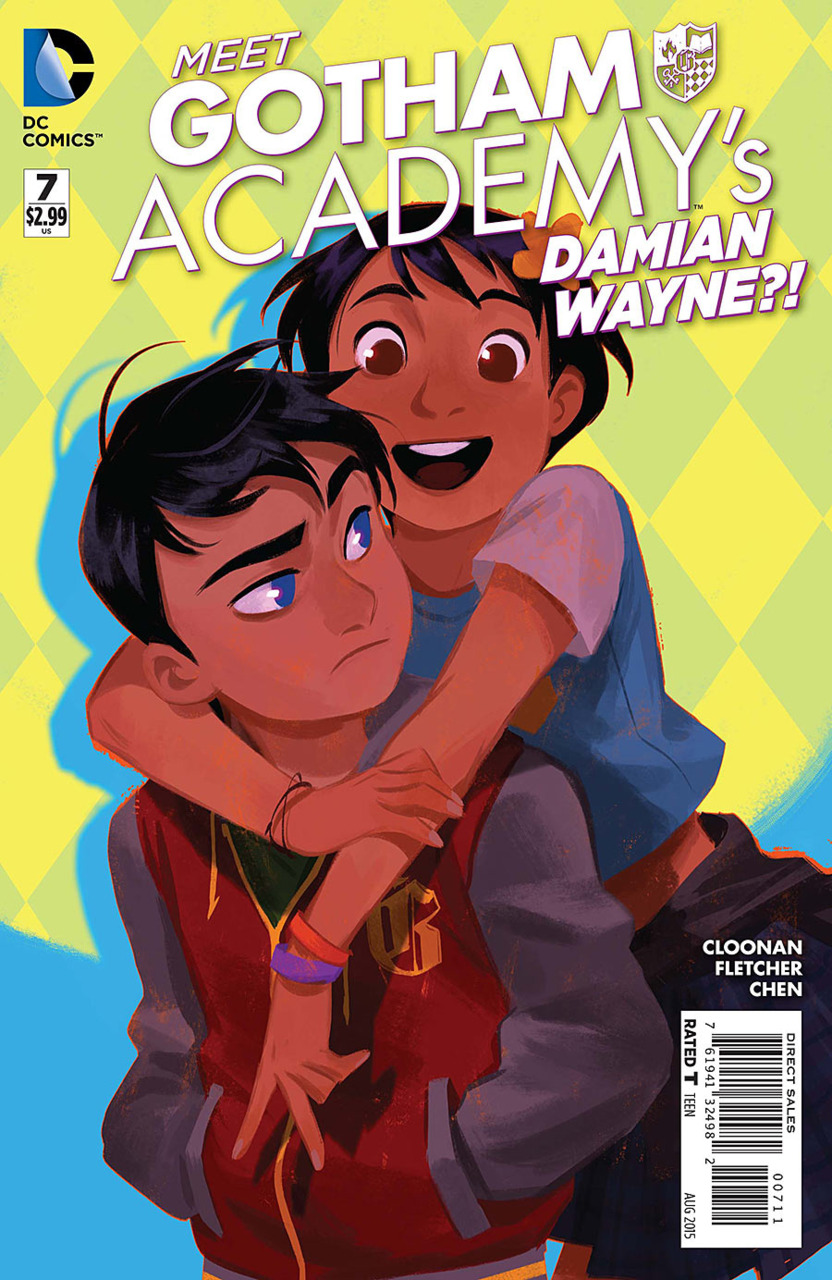 Gotham Academy returns after the end of Convergence. Maps is sitting in Mr. Scarlet’s literature class where they are reading through The Raven. Maps is working on a project of her own, writing the names of potential members of her Serpents and Spells Club. She is writes Eric’s name in her notebook with the quill she took from Headmaster Hammer’s office in issue #5 along with his possible skills. Mr. Scarlet points out that Maps isn’t paying attention to the lesson when Eric goes crazy. Suddenly a figure from the back of the class, new student Damian Wayne, easily brings Eric to the ground. Maps decides Damian would be the perfect addition to the club.

Maps goes to Olive’s room to tell her of the drama in class but Professor MacPherson is packing up Olive’s clothes. Apparently Olive is going to be away for a few days. Maps uses the quill to add Damian’s name to the Club list with “Maps Mizoguchi + Damian Wayne” as the Ultimate Power Team when suddenly she finds that she is teleported to where Damian is working out and their hands are stuck together. Damian is upset at the development and a raven comes out of the sky and flies off with the quill.

Maps realizes she and Damian are stuck together by magic and goes to Pomeline to help unstick them. They realize that this strange event as well as Eric’s meltdown happened right after Maps used the quill to write their names. The quill must have magic powers. Suddenly in an insane development Pomeline pushes the still linked Damian and Maps out the window. Damian is able to hold onto the window sill and tells Maps to grab the Grapple Gun out of his pocket. Grapple gun? Maps is in heaven. They swing away to safety, or at least into Map’s brother Kyle’s room. Kyle, also under the spell of the quill, attacks Damian with a racket but he has no chance against the slumming Robin.

They go to see Professor MacPherson to get help. The professor tells them the story of the Scottish village of Inishtree, home of Castle Wayne, where demon birds dwell. The birds cause the children of the village to go crazy. A villager, Morgan Kilbec, died while helping Batman save the town from the avian illness causing the problem.

Professor MacPherson, her dog Ham, and the two students set off to find the Raven with the quill. They are attacked by some students who Damian easily disables. They find the bird with the quill and Damian uses a Batarang to recover the quill. Mr. Scarlet arrives and points out that the quill has a strain of Avian Flu that infected the students and made them crazy. This of course doesn’t explain Maps’ and Damian’s hands being stuck together but Scarlet points out that it was by their choice. Suddenly their hands unclasp.

Unfortunately Headmaster Hammer arrives and brings them to his office. Damian takes credit for the theft of the quill saying that it is a Wayne family artifact. Hammer expels Damian and Maps goes after him. He says that she found her notebook and someone had crossed out her and Damian’s name from the book which may have unclasped their hands. She thanks Damian who gives her the gift of a Batarang. Maps is in love, though its not clear whether it is with Damian or her new toy. I think it is with the toy.

Professor MacPherson arrives and tells Maps that they need to talk about Olive. Sounds like some drama for the next issue.

Gotham Academy is one of the most beautifully drawn books in the current DC lineup. The lines are clean and neat, the colors are gorgeous and the story is told very clearly and simply. Maps is a terrific character and you can really feel her childlike excitement at every twist and turn of the story. The different teachers too are clear characters. The other students however: Eric; Kyle; and Pomeline are really just plot devices in this issue, though they are typically strong characters.

Damian has what amounts to a guest starring role here. It seems like he is being expelled from the school and it isn’t clear to me whether he will be back and a consistent part of this series or if it was a one shot deal. It would be nice to see him interact with the Gotham Academy kids some more though it doesn’t appear that he will.

I also missed seeing Olive in this issue. Maps is a great character but her enthusiasm is balanced with Olive’s presence. Damian is a good foil, but I felt Olive’s absence.

One issue that was confusing at first was the plot point of the quill. I didn’t notice that Maps was writing with the quill that was introduced in issue #5 back in February. So I was a little confused about what the heck was going on for a while.

Also, I found it strange that Batman hung around Wayne Castle in Inishtree centuries ago. Gotham Academy is supposed to be in continuity so I did a little research and found that in World’s Finest Vol 1 #225 from October 1974 “Superman and Batman go to Castle Wayne in Inishtree Scotland to investigate a rumor of possessed children with great powers”. Ok, fair enough. I wasn’t able to dig up that issue to verify the details but well done to the writing team for uncovering that nugget.