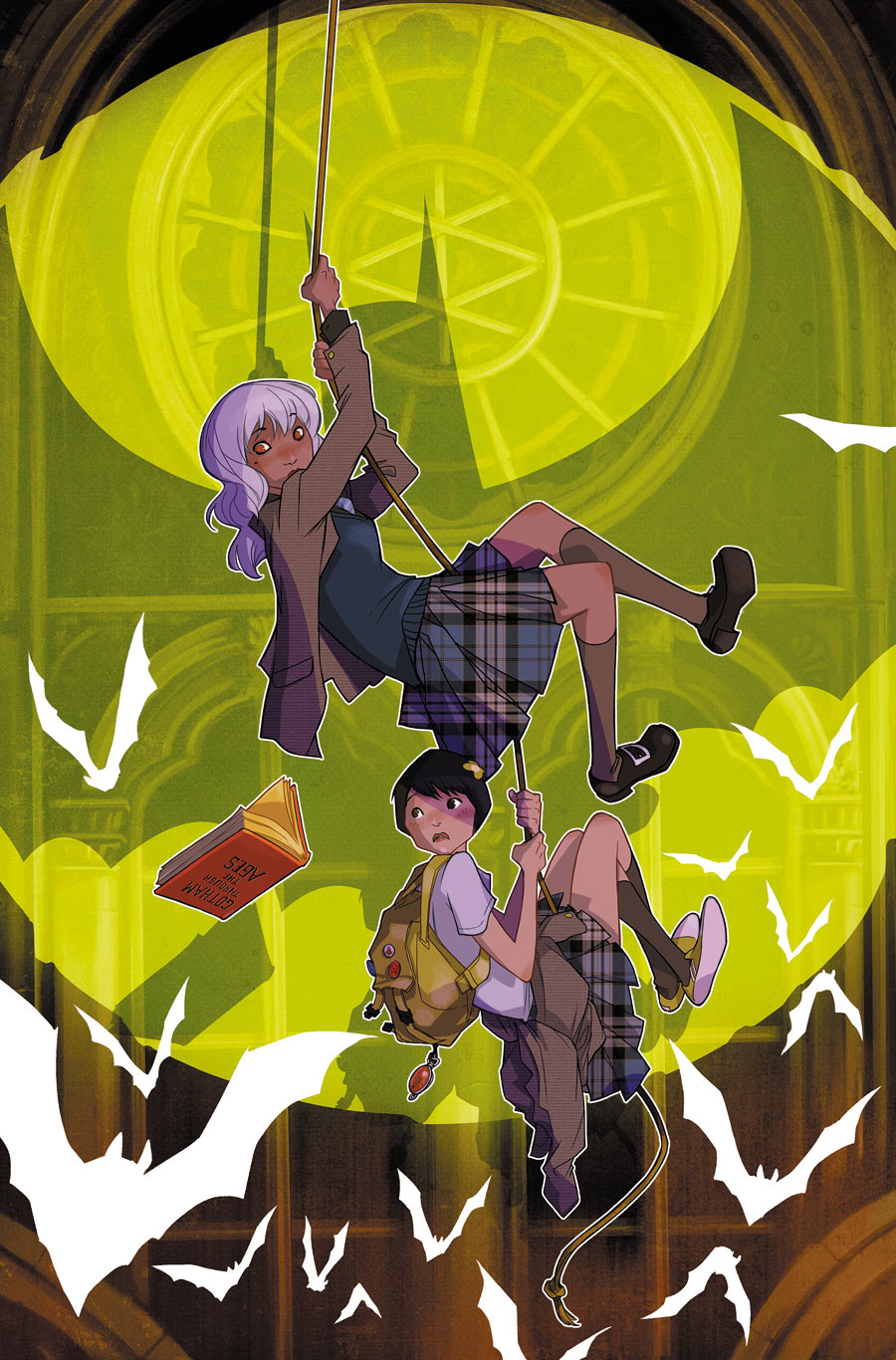 CBR News: I was going to ask you how this collaboration was conceived but seeing as the three of you are sitting around one phone in your Montreal studio, is the answer convenience? [Laughs]

Becky Cloonan: Actually when the book came up as a possibility, we all started talking about it and it all formed very organically.

And what was your pitch? Nancy Drew/Harry Potter/"Glee" comes to Gotham?

Fletcher: Almost. Minus the "Glee."

Karl Kerschl: [Laughs] Becky and I sit a few feet apart in the studio and one evening in January, [DC Comics editor] Mark Doyle called Becky and started talking to her about Batman because he had just become the new Batman Group editor.

Cloonan: He said that [DC] wanted to try some new books and get some new creators to pitch whether it was an ongoing or a single issue or a miniseries. And he threw out some ideas and after that conversation, I was like "It's gotta be 'Gotham Academy.'"

Kerschl: But Becky couldn't draw it because she's working on another graphic novel.

Cloonan: That's right. I worked with Mark on the "American Vampire" anthology so I remember thinking, "Oh, he wants me as an artist and not as a writer." But he actually said, "I want you to write it too." He said he thought my mini-comics were great. And when I told him I couldn't draw it, he said I could just write it. Mark has always been really encouraging about me jumping to the other side from artist to writer.

We don't know much about "Gotham Academy," so let's start with the high concept. What's it all about?

Cloonan: After I got Brenden onboard as a co-writer, the three of us started going back and forth and the idea just kind of grew organically of Harry Potter in Gotham. That's the feeling we want to evoke. And it's all new characters, which gives us a chance to bring a different flavor. We have a bunch of kids going to boarding school while moving around in this world where all of these superheroes exist.

Some of the inspiration comes from Scott Snyder's run on "Batman." He made this whole secret history of Gotham with the Court of Owls and there's all this stuff about the city we don't know. We have these kids going to this old boarding school in Gotham and there is all of this history and they can explore it and grow up and find out things about themselves and Gotham.

Kerschl: And having an all new cast of characters helps because all of the existing Batman characters have a handle on the city. It's interesting to see these students, these really young kids, discover the city. It's a real fresh perspective.

Cloonan: And the existing characters have already discovered themselves. And have already put on a cape and a cowl.

Kerschl: But the students are being mentored by some of these existing characters.

Cloonan: Yes, you are going to see some familiar faces but the main ones are all going to be new. It's definitely a coming-of-age story.

Like Hogwarts, are the students at Gotham Academy "special"? Are these the sons and daughters of DCU superheroes and villains?

Fletcher: These characters definitely have secrets. And we obviously don't want to reveal them all yet. Part of the development of this story is that we see these characters from young children to people that could be the next heroes of Gotham City. Or maybe they are going to go the other way. We don't really know. As we dig into the mysteries of the building and the land and how they connect to the city as a whole, we'll find out more about the backgrounds and characters of the past and how they're connected to the city and the heroes and possibly villains of Gotham. And Batman. Sorry for being so evasive. We're not trying to be evasive. We actually want to tell you all about it but we don't want to show all of the cards just yet. [Laughs] We just want to give you a sense of what it's all about. The first few issues with these new characters are going to play out like "Nancy Drew Mysteries" in a "Harry Potter"-like boarding school. But all of these stories lead to Gotham and lead to Batman.

Kerschl: Much like the first "Harry Potter" started out as an innocent boarding school mystery story and then spiraled into a richer exploration of Hogwarts and the wizarding world. And it also got a lot darker. We're definitely following a similar path.