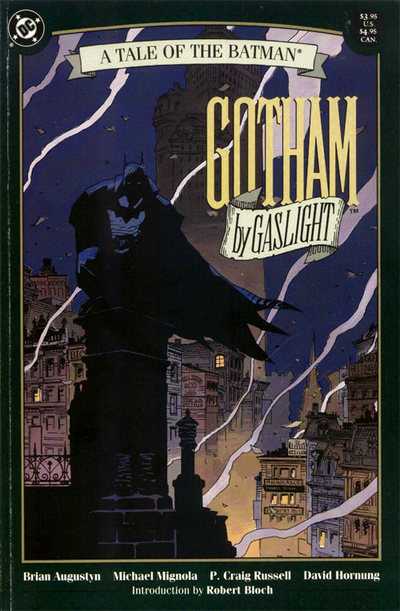 Gotham by Gaslight is a story that, if you’re not careful, can pull you into the catch-phrase sweepstakes. For instance, the story was the benefactor of a “Perfect Storm” of creators, concepts, form, and format. The standalone forty-eight-page original graphic novel spawned not just a sequel, but also an entirely new line of books. While the first edition didn’t carry the now familiar logo, Gotham by Gaslight is widely considered to be the book that launched the hugely-successful “Elseworlds” imprint exploring alternate pasts, futures, situations, and scenarios for DC’s pantheon of heroes. This month’s release of a new animated feature film adds Gotham by Gaslight to a growing list of films exploring the DCU’s hugely popular multiversal conceit (Justice League: Gods and Monsters and Crisis on Two Earths among them.) While another descriptor often bandied about these days is “classic,” Gotham by Gaslight truly earns that distinction.

Overview: Set in 1889, Gotham by Gaslight invites us to take a glimpse at what Batman’s war on crime would have been like a hundred years in the past. While many familiar faces will help him on his mission, Batman will be forced to come face to face with one of history’s darkest villains in order to save the city he loves and avenge the murder of his parents.

Synopsis (spoilers ahead): Gotham by Gaslight begins with Bruce Wayne returning to Gotham in a similar manner to many origin tellings we’ve seen but with an important distinction. Set one hundred years before its publication, we open in Gotham of 1889. Bruce is just back from a five-year tour of Europe where, ostensibly, he has lived the millionaire playboy lifestyle of his public persona. In truth he has continued training his mind and body under the tutelage of the foremost experts in the fields. After a reunion with Inspector James Gordon, Bruce rushes home to inquire of Alfred, “Is it still here? Is it ready?”

One distant shot of the bat-suit is all we need to know exactly what he is referring to. Alfred can only answer, “It’s been waiting for you.” None too soon, for no sooner do we get a chance to see Batman intercept a gang of safecrackers when we’re given witness to the arrival of the story’s central villain. Jack the Ripper, it seems, has crossed the Atlantic to visit his terrifying violence on the women of Gotham. It’s not too long before Gordon and his department come to the conclusion that Bruce Wayne and Jack the Ripper to have returned to Gotham at the exact same time.

Interestingly enough, Batman spends nearly as much time behind bars as battling crooks in this story. As the evidence mounts, it becomes clear that Bruce Wayne has been living a double life…as Jack the Ripper. When Inspector Gordon finds the murder weapon on his estate, he is forced to arrest his friend.

Although he has the means and guile to affect an escape from prison, Bruce feels he must trust the system he has donned the cowl to protect. But as the court proceedings unfold two things become clear. He is going to be found guilty, and whoever has framed him is clearly exacting the price of a personal vendetta. Indeed, the Ripper murders in London and the identical killings that have taken place in Gotham do hold a chilling link to the Wayne family. Provided with case files by Gordon, Bruce pours over the evidence from behind bars and finally deduces the connection. With time running out to prove his innocence he enlists Alfred in the last minute ploy to escape his cell and track down the real killer.

During the final confrontation, the true Ripper admits not only to the killings but also to the fact that his psychosis began long ago while inappropriately courting the wife of a close friend. Consume by what he perceived as the intentional embarrassment of Martha Wayne politely rebuffing his unwanted advances, he became obsessed with revenge. In order to “silence her laughter”, he hired the criminal who killed Thomas and Martha that fateful night. Yet her laughter haunted him even across the ocean and the murders that followed, he claimed, were all committed because he saw her laughter in the faces of each of his victims.

This brings Bruce face to face with his maker in a way that’s not often been explored in the Bat-mythos, as the anonymity of his parent’s killer is in many ways tantamount to Batman’s ongoing war on crime. Here the killer, in fact, begs Batman to end his life after admitting to killing his parents (although he couldn’t know that under the mask was the face of the child who was left alive that night.) We’re left to wonder, however, whether or not Bruce would have done the deed himself as Gordon arrives at the climactic moment, precluding the possibility of the vigilante exacting his own brand of justice.

Analysis: Gotham here is a clear analog for a New York City at the end of the nineteenth century. Her streets are teaming with the excitement and energy of a nexus for cultural advancement, creativity, and development. The flow of power and money also implies the darker sides of commerce. While Gotham is a mecha for dreamers and doers she is also a destination for schemers and takers.

The use of historical figures (such as the inclusion of Bruce’s studying under Freud) is a special feature of Gotham by Gaslight. More central to the story is the historical mystery of Jack the Ripper. Bringing the Ripper back from London to Gotham and dropping one of history’s most fiendish villains in a new setting creates a brilliant detective’s challenge backdrop to pit this, for lack of a better term, more gothic Batman against. The immediate introduction of familiar characters, as well as some new and different faces, allows room for the case to simmer just enough before the book heads for its climax.

The story also expertly fashions the traditional elements of the Bat-Mythos around the historical context. While many Bat-aficionados would groan at the thought of revisiting the scene of Thomas and Martha Wayne’s murder, the horse-drawn carriage brought under attack from a pistol-toting “brigand” does just enough to make this an original look into the origin story. We’re even thankfully spared a shot of careening pearls across cobblestones or otherwise. During a moment with Bruce and Gordon, we get a glimpse of a serial killer using strychnine to poison his victims. Finally turning the poison on himself, however, the killer doesn’t manage to finish the job properly and instead is left with a face paralyzed in a permanent, familiar rictus. It’s clever and satisfying, a microcosm of the entire book.

Lastly, it’s the rapid-fire pace of this book that tells its own story. In the modern era of vast arcs; Courts of Owls, Eternal, Bats and Robins, Superheavy Gordons to name a few, Gotham by Gaslight tells a memorable, rich and impactful story in a forty-eight-page prestige “double size” format. Fire and don’t forget. Long form storylines can be very enjoyable and are built to give the loyal reader a final payoff. It’s important to note, however, that something as complete as Gotham by Gaslight can be achieved in such an efficient manner.

Mike Mignola’s pencil style seems almost to have been created explicitly to tell this story. Published nearly thirty years ago, it’s amazing how his chiseled lines and blocks of negative space contribute so dramatically to the feel of a story, even in the early stages of what would become such a remarkable career. Those familiar with the immensely popular “Hellboy” franchise and its spin-offs published by Dark Horse Comics would immediately recognize Mignola’s signature style and can easily see how it would easily be adapted to the trappings of Batman tale with such a Lovecraftian edge. Perfectly suited to Mignola’s gothic pencils are the lines of inker P. Craig Russell. Mignola’s pencils do not carry the look and feel that would become the hallmark of the early nineties’ extreme style. His characters are grim and foreboding with a minimalism that seems in direct opposition to his attention to detail. Each line is deliberate and Russell’s inks do wonders to convey that.

Bryan Augustyn is to be commended for making such a full-figured story fit within the forty-eight-page binding. If anything, the story might be a bit heavy with words, as many panels overflow with word balloons and the margins are largely covered in exposition. Yet the pages still turn nearly effortlessly as we are immersed in a Gotham of 1889. The telltale grammatical flourishes in both dialogue and narration that distinguish this Batman story from others are as complimentary as David Hornung’s cool pastel color palette is to Mignola’s penciled panels.

Final Thoughts: The legacy of Gotham by Gaslight cannot be understated as the Elseworlds imprint that was launched out of its success has given rise to some of DC’s most creative, successful and critically acclaimed stories since it’s publication in 1989. Debuting at the end of an era that produced Watchmen and Dark Knight Returns, Gotham by Gaslight may not have felt like history in the making as it happened. Looking back almost thirty years, however, its impact is clear in foreshadowing not only a new line of DC original graphic novels but also the blockbuster status of penciler Mike Mignola. With the release on digital a few weeks ago and the physical disc release tomorrow of the animated feature adaptation, fans will soon be getting to work contrasting and comparing the two works. Before sitting down to take in the new movie, be sure to do yourself a favor and go to the source material. Take the time to see what happens when one of history’s most macabre true-life super villains comes face to face with one of the most timeless fictional detectives ever imagined.