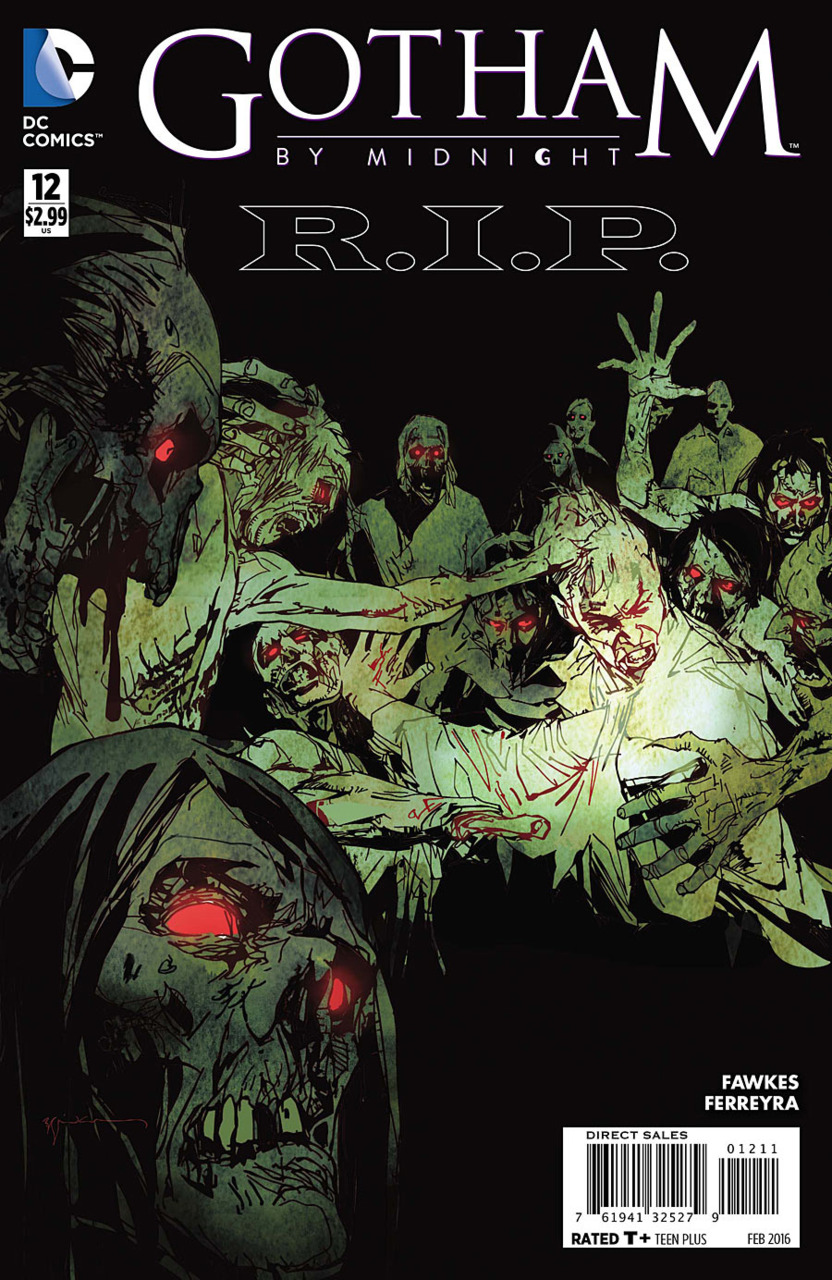 “Midnight” continues with the characters in the midst of the zombie apocalypse. The angel seen at the end of the last issue is the ghost of Sister Justine. She is there to bring the Spectre back from Ikkondrid. Spectre still senses the blood of the wicked and his hand will not be stayed and he attacks Justine.

Lightning comes down and strikes the Batman suit. Gordon evacuates the suit. Tarr releases light in the air that the zombies cannot enter. The kids enter the light and see Justine, the Nun of the Narrows.

Drake pulls her gun on Corrigan in the hopes that by killing Corrigan this apocalypse will end. Corrigan is finally able to hear the Spectre’s thoughts. He and Corrigan are angry. Justine is allowing Corrigan to think. Corrigan realizes that there was a truce between the Spectre and Ikkondrid. That truce was broken. Drake does not know what their end of the truce was. Jim says that they failed to deliver justice. Gotham’s unjust dead have returned to claim what they needed. Precinct 13 was busy fighting small stuff and monsters and they did not provide the justice the dead needed.

Corrigan realizes that Ikkondrid returned because it is not satisfied. Drake walks into a hoard of zombies probably as an act of suicide, saying that no one is satisfied in Gotham. The fights continue across Gotham with scenes from the fight at Precinct 13, the Batman fight in the streets, Tarr in the Narrows, Drake being attacked by the zombies with Corrigan engulfed in a light. Corrigan realizes that Ikkondrid wants Gotham to care about the injustice and the wrongs around them.

With that, Justine and the Spectre soar to the skies of Gotham. The two gather the energies from all the zombies and ghosts ravishing Gotham. The dead all vanish leaving the living unharmed but changed. Justine and the Spectre redirected all the pain and the memories of the unjust dead into the hearts of the living. They will remember the dead and know that no one is alone in their suffering.

We close the series with the surviving members of Precinct 13, Drake, Corrigan, Weaver and Tarr. They have done good for once and they see the sunrise over Gotham Harbor.

This issue took me a couple of read through to really understand what was happening. That however is not a bad thing as this was a very dense message. The way I understand the message is that it is not always right to fight injustice, sometimes you just need to remember. I find this an interesting and deep concept for a comic book and that is a good thing. This book was willing to look at ideas and issues that are normally not addressed in the usual comic book fair and for that I am truly sad to see this series end.

This was a great send off for a great book and I give this issue five batarangs for a satisfying if not bitter sweet ending. I would like to recommend this entire series, it had some down points but overall this was an enjoyable read and I am sad to not see some of the plot threads completed such as the Lisa Drake thread form the Annual.