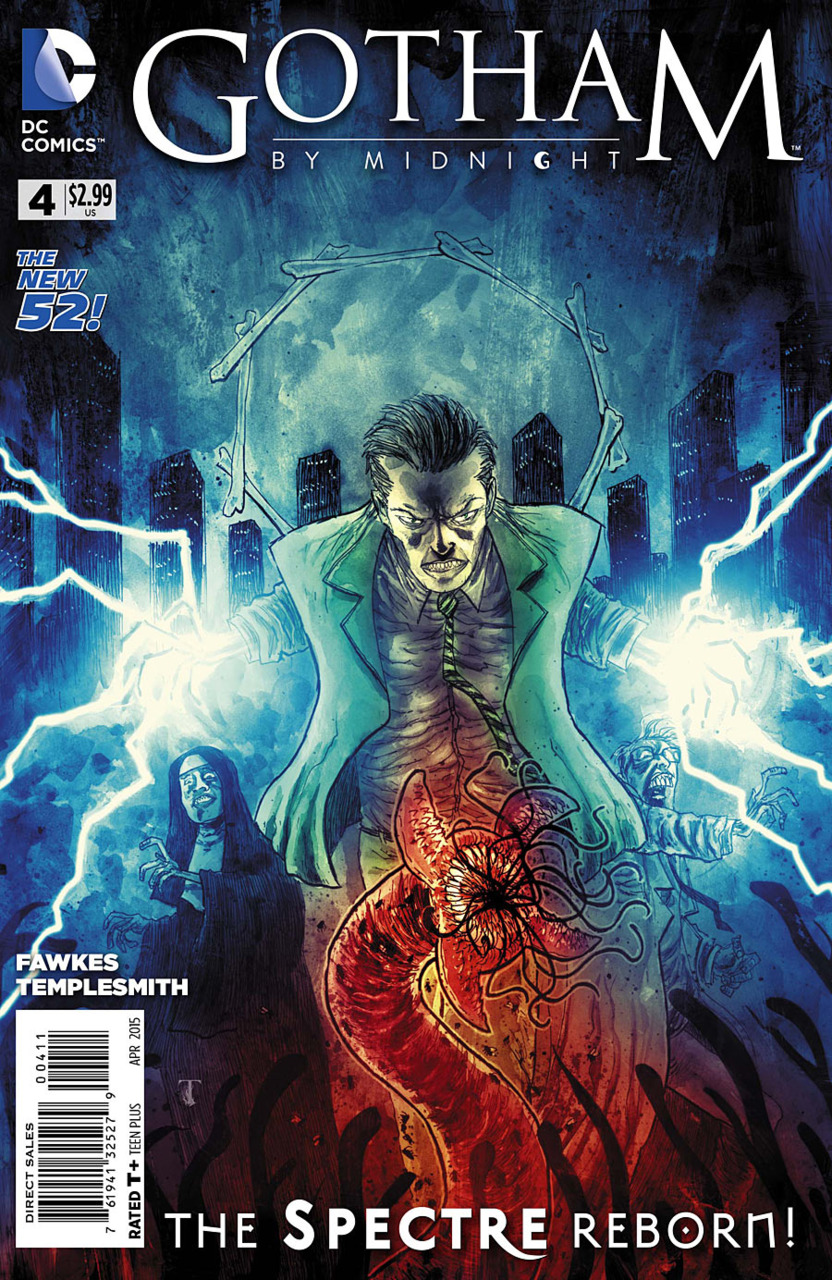 The first arc of “Gotham By Midnight” continues forward as in issue #4 we are given more clues as to what is carrying out a supernatural attack against Gotham City. After successfully taking down the nun ghost monster in issue #3 we open up with Jim Corrigan succeeding in getting Sgt. Rook from Internal Affairs drunk in hopes of getting him to not bringing up the entire midnight shift up on fraud charges as since Commissioner Gordon put together the task force they have never logged a single arrest. Even after seeing first hand exactly what it is that Corrigan and his team do it apparently isn’t enough for Rook. But luckily for Corrigan and the team, Rook dies within the first few panels as a result of another attack from what is believed to be connected to the monster from issues #1-3.

For the first time in the series we get to see The Spectre in full force after being provoked by “abomination” that kills Rook and it is seemingly the first time that Corrigan’s team truly understand the scope of what he meant when he said he wields God’s Judgement. It is revealed that the supernatural evil that has cursed Gotham City is the sins of it’s founders in which they killed an entire people in order to settle the area. The Spectre follows the call of the monster to the outskirts of the city to it’s source being a swamp.

To be honest not a whole lot happens in this issue as it is mostly set up for a big showdown in issue #5 between a seven story Spectre and a likewise what can only be described as a Shadow Monster or the form of the before mentioned sins of Gotham’s settlers and so forth. The final page shows the two monsters about to throwdown in a scene akin to the a “Godzilla” film and a great cameo of the Bat-Plane between the two before the fighting erupts. It will certainly be interesting to see the fallout of this fight and even more so as Batman makes his first appearance in this book aside from a one panel cameo in issue #1.

Fawkes really shows that he has a handle on the character of Jim Corrigan and The Spectre and much like his issues in “Batman Eternal” he provides a brilliant amount of suspense when it comes to just how much Corrigan can stand before The Spectre is awakened within him in order to dispense God’s wrath. After what I felt were a lackluster three issues this one really knocks it out of the park for me by setting a tone worthy of the characters in the book.

One thing however that I am still trying to get used to is Templesmith’s art style. One one hand it is kind of cool as the backgrounds have this very distinctive style to them that reminds this reviewer of watercolors. One thing that I do give him is his uncanny way of being able to give us so much by using so little. His style when it comes to drawing people is very unconventional and I doubt he will ever draw any the main Bat titles yet it is perfect for this kind of book. It almost has a very underground comic vibe and anyone who is into that kind of line would be doing themselves a service in picking up this book.