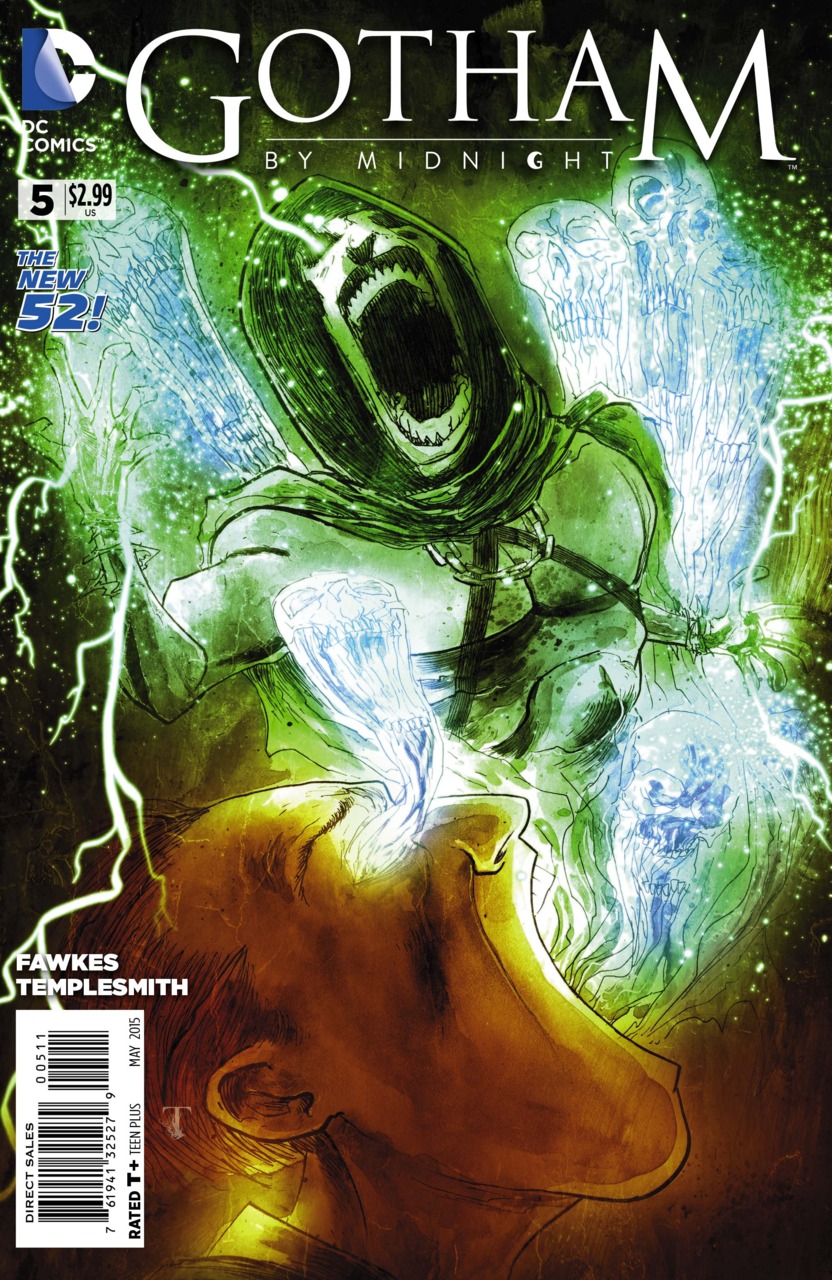 The conclusion to the first arc of Gotham By Midnight comes in issue #5 as a skyscraper sized Spectre attempts to take the lord’s wrath out on Ikkondrid, the swamp monster that is Gotham’s evil personified with Batman caught in the middle of this battle of Godzilla like proportions. As Jim Corrigan lays comatose in the bar he frequents and the Spectre eminates from his body it turns out this is the biggest that Detective Corrigan has ever seen him come out. As the two duke it out across the Gotham City skyline Batman in the batwing does his best in the way of compression bombs in order to take “The Corpse” down but he soon finds out that his strategy is useless. Back at the bar that Corrigan frequents his fellow cops are watching the battle royal between the two behemoths are fiercely debating whether or not they need to shoot Corrigan in order to save the city not realizing that if they do that everyone will die as he is the only thing that stands a chance against the giant swamp monster.

We get an interesting insight to how the Spectre views Corrigan as even though he is incapacitated while the Spectre is on his rampages he still has a front row seat to what the Spirit Of Vengeance is doing. We find out that they really don’t get along as Spectre finds Corrigan to be weak and ultimately stupid.

It’s really unclear to this reviewer what exactly happens within the conclusion of this issue. The swamp monster is shedding some sort of black flowers but it is really not very clear exactly what their purpose is. And while the Spectre in true fashion spouts out his usual shtick about how he is the punisher of all evil and it cannot escape him, his opponent is really not saying anything more than what amounts to nonsense. This villain has really proven to be one of the least fleshed out or very little explained that I have ever run into. And what happens next only backs up that claim.

While Corrigan’s team continues to argue about shooting him in the head others are praying directly to the Spectre for him to spare the city his wrath. Finally they convince him that to destroy the swamp monster would also destroy the entire city and the fact that everyone will die will indeed not be justice as they are not all guilty of sin. Making things even more confusing the Spectre lets out a scream reminiscent to a temper tantrum and breaks every window in the city. Ikkondrid then turns around and returns to the swamp in what can only be described as baffling.

Ray Fawkes who writes this arc even goes so far as to have his Corrigan say in thought that he has no idea why the monster has turned around and returned to that in which he came. That is also followed up by Batman telling Corrigan that even HE doesn’t understand what the hell just happened as they all stand over the dead body of a nun who prayed to the Lord that he tell the Spectre to spare Gotham. Jim says that the Spectre knows but wont explain it to him. Nothing was forgiven and the monster while done for now, is still pissed at the city.

A truly underwhelming conclusion to an otherwise interesting yet hard to follow story arc.