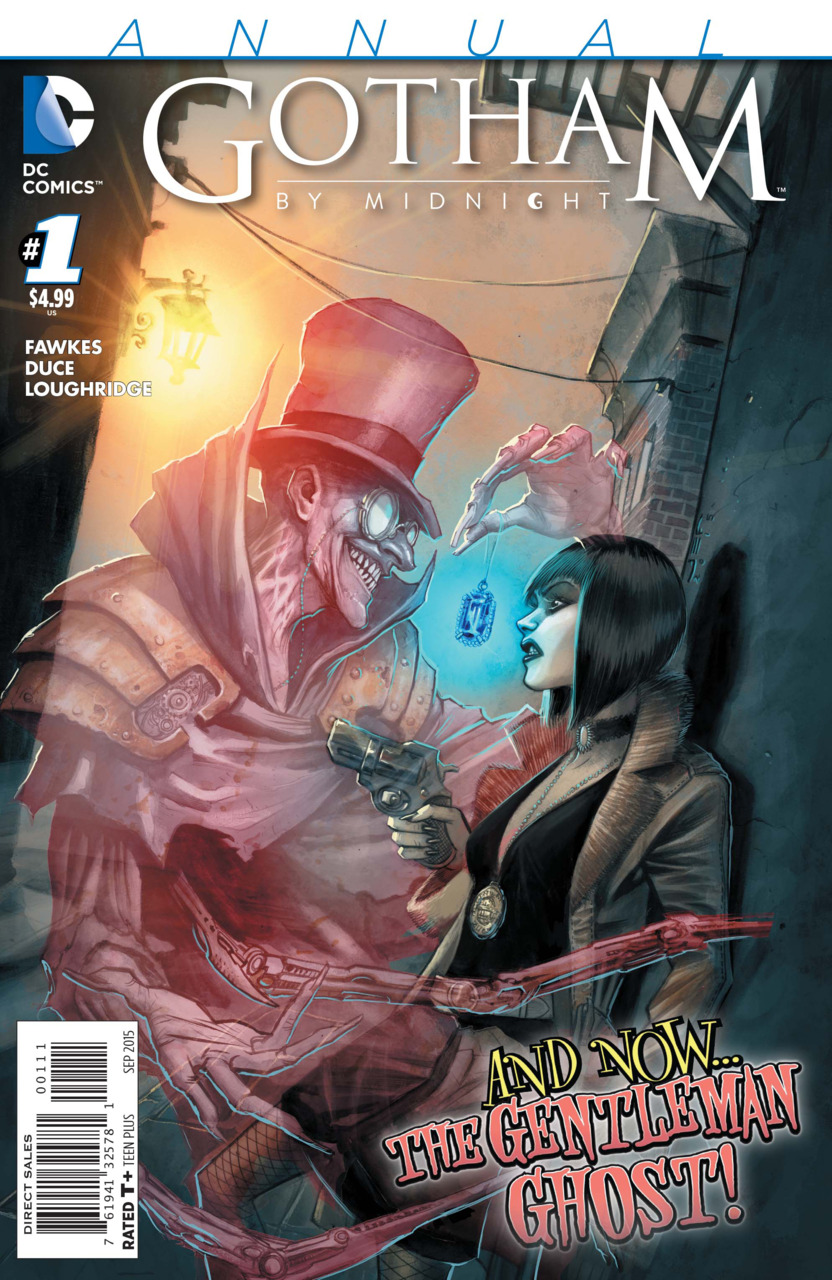 “The Gentleman Ghost” opens with Jim Craddock and Eleanor Weir enjoying a romantic moment on a balcony over Gotham Harbor. During a kiss Craddock removes a necklace from Eleanor’s neck. Suddenly we hear knocking. Drake and Corrigan are at the door. Corrigan throws an amulet at Craddock but Craddock escapes by phasing through a wall. Drake immediately chases after Craddock leaving Corrigan with Eleanor who looks like she is in shock.

Drake pursues Craddock through a pool hall. He keeps escaping by phasing through solid objects. We jump back to Corrigan who is checking on Eleanor. During their conversation Eleanor appears to be getting weaker. Meanwhile the pursuit continues. Drake finds herself face to face with Craddock who has stopped running. Drake attempts to use an enchanted pair of cuffs given to her by Corrigan. Drake seems to falter in her resolve as she attempts to arrest Craddock. Craddock seems to woo Drake and then vanishes leaving Drake holding the “enchanted” cuffs and Eleanor’s necklace.

Drake returns to find Corrigan holding an unconscious Eleanor. Drake gives Corrigan the necklace and leaves with Eleanor in an ambulance, leaving Corrigan with the necklace. Back at the precinct Dr. Tarr is examining the necklace. The necklace is called “The Tears of Eurydice,” it was an engagement gift for a New England heiress in the nineteenth century. It was listed as stolen and just came up in a recent auction where the Weirs bought it. Tarr found nothing remarkable but the Spectre did detect a sin.

At the hospital Drake is talking to a sleeping Eleanor. Drake thinks Craddock did something to both of them. She does not know what. Eleanor wakes and points and mutters “the moon, it’ll bring him back.

At that instant Craddock appears behind Jim Corrigan. Craddock and Corrigan talk where Craddock calls himself the “Gentleman Ghost” but in fact is really is not a ghost. Craddock says that Eleanor’s current condition is Corrigan’s fault. The first kiss steals her breath and the second gives it back. Corrigan interrupted the second kiss. Craddock disappears into thin air leaving Corrigan alone and without the necklace.

Craddock re-materializes in a train and is immediately met by Drake and Corrigan. Corrigan uses the talisman he had earlier to prevent Craddock from moving and steals the necklace back. There is a minor scuffle where Corrigan is hit and he starts to feel the Spectre emerging. Drake tells Craddock that she has the gem that can blow him to bits and Craddock surrenders. Craddock starts a story to recount how he became the Gentleman Ghost. A witch made Jim Craddock what he became and started to use him for her purposes. If Craddock denied her, she makes him into a monster and when he defied her, she inflicted pain on him. Craddock only had to wait for her to die and when she died, he thought he was finally free. He was wrong; Jim Craddock remained the Gentleman Ghost after her death. The necklace is in fact Jim Craddock’s. They were given to him by his last love in life Pauline. Pauline was the daughter of the witch who would curse Craddock. To prevent Jim and Pauline from getting together, she hired gunmen to kill Jim and he died holding the necklace.

After this story, Craddock renews his fight with Corrigan and Drake and actually succeeds in escaping from their custody while taking the necklace back. The Spectre renews its effort to emerge from Corrigan. Corrigan orders Drake to get Craddock away from the train, if the Spectre comes out after Craddock and finds other sinners; it will attack them as well. Drake pursues Craddock again and Corrigan manages to exit the train after Craddock. In the scuffle, Drake manages to rip the necklace away from Craddock and fling it off the train. He takes off from the train after the necklace. Drake also escapes the train and confronts Craddock again. We now see why Craddock wants the necklace so bad, if he is separated from the necklace he becomes an inhuman creature. Just then the Spectre appears. Craddock kisses Drake while the Spectre snatches the necklace and crushes it as the Gentleman Ghost disappears. After the disappearance of Craddock, Corrigan is freed from the Spectre. Corrigan notices that Drake is still with him even after being confronted by the Spectre. Perhaps she is not a sinner after all. Drake muses that Craddock did not deserve to die.

Despite my recap, I liked this issue. It was the perfect format for an annual. It is a one off story which has no crossover with the events in the regular comic.

It was fun to see the Gentleman Ghost. I do not have much of a history with this character except I believe he was created as a Hawkman character at least I remember seeing him appear in the pre Infinite Crisis Hawkman series. I also remember seeing him in the Batman: The Brave and the Bold cartoon. This was an interesting take on the character. He claims that he is not a ghost yet he describes his own death. He clearly is not alive. It was interesting to depict him as some kind of spider creature as often see him with what looks like spider legs that he can actually walk on at times but he can also use them as weapons as well.

My question with this issue involves Drake. We clearly see Craddock kiss her before the Spectre seems to “get” him. Was he able to transfer his “soul” into Drake with this kiss and as a result allow his body to disappear? Drake does look strange in the last panel of the book. I hope we see an aftermath of this issue soon.

It had its slow moments but overall it was a good read.