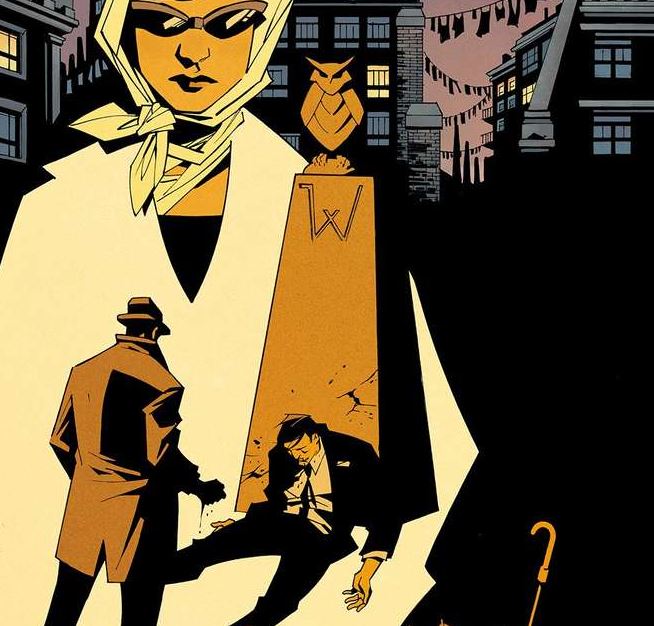 Overview: Slam Bradley’s tale to Batman about the origin of the evil in Gotham City swirls in dark twists in Gotham City: Year One #2 as the Waynes and the kidnappers tangle their plots around him.

Synopsis (spoilers ahead): As Gotham City: Year One #2 begins, the Gotham Police Commissioner interrogates Slam Bradley about the murder of his employee Johnny, who was shot with Slam’s own gun. Since Slam can’t tell the police he was working for the Waynes in the negotiations for the return of baby Helen Wayne, he tells them nothing, leading to brutal beatings, but is eventually let go.

Walking home, he finds Sue, the woman who gave him the letter in the last issue, at his door, who warns him that she has powerful friends. He asks her about the Bat-man – the man who put the bat symbol on the letter to the Waynes, and says the Waynes have agreed to pay. He says he accepts the death of Johnny, but warns Sue that if her employers kill Helen Wayne, he’ll destroy them.

An hour before the time he told Sue, Slam finds a new letter with instructions in his office and takes it to the Waynes. Richard insists on going with him, viciously insulting Constance when she disparages him. Constance and Slam converse over a cigarette and pipe, and she shuts him down hard as he tries to agree with her objection to Richard’s plan.

As they head to the rendezvous, Richard asks Slam about his friendship with the black citizens of Gotham, offering him a job to help promote his new facility in their sector of the city. They arrive at the place, and Slam meets with Sue on the rain-drenched roof alone. She claims no knowledge of Helen and says she’ll give him a third letter for the money. Slam refuses, and walks off the roof, but Richard forces him back out at gunpoint. Sue is happy, childishly so, exchanging the money for the letter, then leaps off the roof, landing on the next roof below, and running away gracefully.

The letter directs them to the graves of Richard’s parents, but when they get there, the baby is nowhere to be found, and Richard threatens Slam with the gun again, accusing him of working with the black Gothamites against him, so Slam knocks him down.

In the present, Slam tells Bruce Wayne that he didn’t know how far the fall he faced was.

Analysis: Tom King and Phil Hester’s neo-noir take on the history of Gotham City continues in Gotham City: Year One #2, still treading fairly standard paths with the tropes available, but thankfully less ploddingly than the first issue. King manages to imbue a lot more humanity in Slam this time, from his stoic way of dealing with his grief and guilt for the death of his employee and friend Johnny, to his fumbling around the Waynes, to the devastating way the tension builds within him as everyone around him kicks him repeatedly (both literally and metaphorically) until he snaps in the final two pages, taking down Richard Wayne, the most powerful man in the city. There’s a bit too much telling instead of showing – Wayne’s power is displayed in what people say about him, rather than things we see him do, for example – but on the whole, the issue had a lot more character and vitality, dragging up the tension into a much more engaging realm.

There are a lot of questions raised – from whether the micro-managing, brutal police commissioner is aware of just how ridiculous his crime statistics (only six murders in Gotham a year? All solved by confession?), to which of the main women of the book Slam will find himself most entangled with – the terrifyingly mysterious, strangely childish, and clearly Catwoman-predecessor Sue, or the ice cold, vicious Constance Wayne with her bitterly cruel marriage and her impenetrable emotional armor (both, not coincidentally, frequent characterizations by King of his leading ladies). Though the rooftop scene between Slam and Sue clearly evokes both classic Catwoman scenes and King’s own repeated motif of Batman and Catwoman in the rain (such as in Batman Annual #2), I can’t help but be more drawn to Chip Zdarsky’s recent creation of the French cat-burglar Lucie and her training of (and romantic rejection of) young Bruce Wayne in Batman: The Knight #2-3. Slam has grown a lot more personality in this issue, but he’s nowhere near as loveable as Zdarsky’s (or King’s) Bruce, a man of powerful, intense compassion.

Once again, Phil Hester drenches every long, thin panel and page of this comic with sharp jagged linework and brilliant use of black shadow, cleanly and beautifully inked by Eric Gapstur and colored with her usual impeccable taste by Jordie Bellaire. Artistically, the book rewards both casual and careful reading, with panels leading the eye and pace of the story masterfully and revealing characters and the world they inhabit with an assured skill. Visually, the book continues to be a treat, as are all of the books King works on, given his penchant for forming relationships with some of DC’s best artistic talent and writing to highlight their mastery.

Phil Hester’s main cover features heavy Owl imagery over the W of the Waynes, as Slam sprawls bloody underneath the image of the mysterious Sue as his brutal interrogator faces him. Cully Hamner’s cardstock variant features a bloody knuckled Slam, bandaid on his nose like Jake in Chinatown, running forward through Gotham. Natalie Sanders paints a lovely but dangerous portrait of Constance Wayne for the 1:25 incentive cover, decked out in a shiny mustard dress with white trim and a huge pearl necklace.

An improvement in the ingenuity of plotting and characterization increases the interest in what is happening in this second chapter, and the art continues to drench the characters and world in mood.