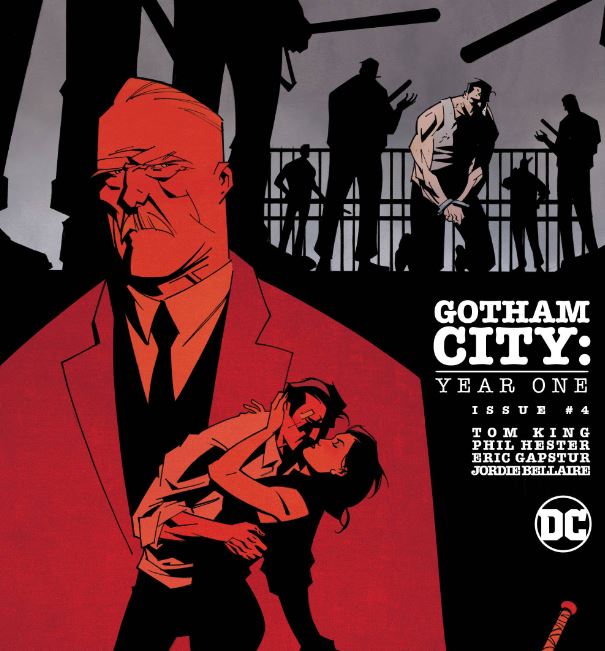 Overview: In the aftermath of baby Helen Wayne’s murder, Gotham City: Year One #4 sees the Gotham Slam Bradley knows slip away in a tide of blood.

Synopsis (spoilers ahead): The chapter in Gotham City: Year One #4 opens with a shot of the Gotham Blade newspaper blaring baby Helen’s murder on the front page as Slam recounts the aftermath of finding her body. The commissioner of Gotham himself beats Slam brutally for failing to turn the case over to the cops. After a few days in jail with frequent beatings, the police cut him loose, and the Waynes pick up where they left off – but when Richard tries to take out his rage and grief in another beating, Slam strikes back, beating Richard and his two bodyguards easily, then intimidates the group into letting him go.

Back in his apartment, Bradley cleans himself up, then Constance Wayne arrives and declares they will sleep together, which they do. Afterward, Constance rages that her husband will use the literal ashes of her dead baby daughter as a literal wall against criticizing his new factory. At 1am, Slam leaves her in his bed and beats the commissioner of Gotham so badly he is forced to retire, causing the alley where the commissioner was found to be called Crime Alley.

Back at his apartment, Slam finds Queenie, the girl who started it all, with a pistol in his room, but he easily takes the gun, and she claims innocence, saying Richard Wayne is to blame.

Analysis: Tom King continues through the middle of his film noir pastiche story leaning pretty heavily on the expected tropes and patois – the femme fatale and the protagonist sleeping together and “got myself a gat” – but sadly, despite Phil Hester, Eric Gapstur, and Jordie Bellaire’s gorgeously stylish artwork, the issue has returned to the same feeling of a complete retread of the tropes, rather than the moments of zest we saw in the last couple of issues.

From Slam’s Korean War backstory to the rehash of Jim Gordon beating Flass in Slam’s beating of the commissioner, it feels like there’s no real verve or zip to the story. Even though King’s writing a pitch-black noir pastiche, some energy, some investment in the characters and worlds other than how they fill the roles expected of them must make it stand out from classics like the Maltese Falcon or the Big Sleep or their modern heirs like Brick or Veronica Mars.

Instead of having Constance Wayne wander through Slam’s life like a zombie femme fatale, hiring and then bedding him with no real coherent motivation, some chapters focused on her perspective might have thrown the story off the beaten track.

Instead of having Slam wax poetic about how the city has changed from a bright facade covering a dark heart into darkness everywhere, with a labored backstory for Crime Alley’s nickname, spending some time having us become attached to the Gotham of 1961, and then having it ripped away would have made it feel something (as Constance claims to want so badly), instead of just seeing it happen.

Speaking of that date of 1961, the Korean War backstory, and the mention of Slam’s age as 98, it’s odd that King is so invested in dating the story instantly. When Frank Miller wrote the backstory of Batman, he deliberately went for a timeless feel – clearly the past, but not nailing himself down to the 1970s, leading at least in part to the eternal feeling the book still evokes. This story will be forever tied to a specific moment in history, and the further we get from publication, the further we’ll get from believing that this is actually the story of Bruce Wayne’s grandparents (and given Constance and Slam’s affair, perhaps even the completely uninteresting secret that Slam is Bruce’s grandfather).

There are so many more interesting ideas that King could explore, like the question of whether the commissioner’s brutal methods were actually worthwhile – but even though he tries to evoke some ambiguity and poetry in Slam’s narration, there’s never a single question that the commissioner is anything but a black-hatted, mustache-twirling bad guy. All in all, the focus on the characters going through the motions of the noir tropes instead of attempting to really look into those tropes and invest the audience in the tragedy King keeps telling us is happening hamstring this chapter of the book. Hopefully, the final two issues give us a bit more to latch onto, but it seems a bit unlikely given how little room there seems to be for King to move out from under the crushing weight of imitating his influences for this tale.

Phil Hester continues beautiful work with his main covers for the series. Like all of the previous covers, he goes with a smaller central figure of Slam enclosed or loomed over by a character from the issue, giving the book a unity of design in a pleasing way! In this case, Slam and Constance Wayne kiss passionately as the Commissioner of Gotham looms over them, all in red, with a bloody bat to the right and a beaten Slam in jail covering the top quarter of the composition. Tony Harris provides a painterly cardstock variant for Gotham City: Year One #4, with a (strangely slim-looking) Slam, bandaged up, smoking his pipe in a cafe as the Waynes look through the window at him. Frequent King collaborator Mikel Janin provides a polished incentive cover, with Constance looking down from a staircase at Slam striking an investigative pose with pipe and flashlight, an ominous red splashed with Bat-shaped shadows washing out the background.

King returns to the leaden, expected “twists'' of the first issue, leading to a denouement that hits with all the force of a whiffle bat, though Hester, Gapstur, and Bellaire’s art once again lifts the book up.