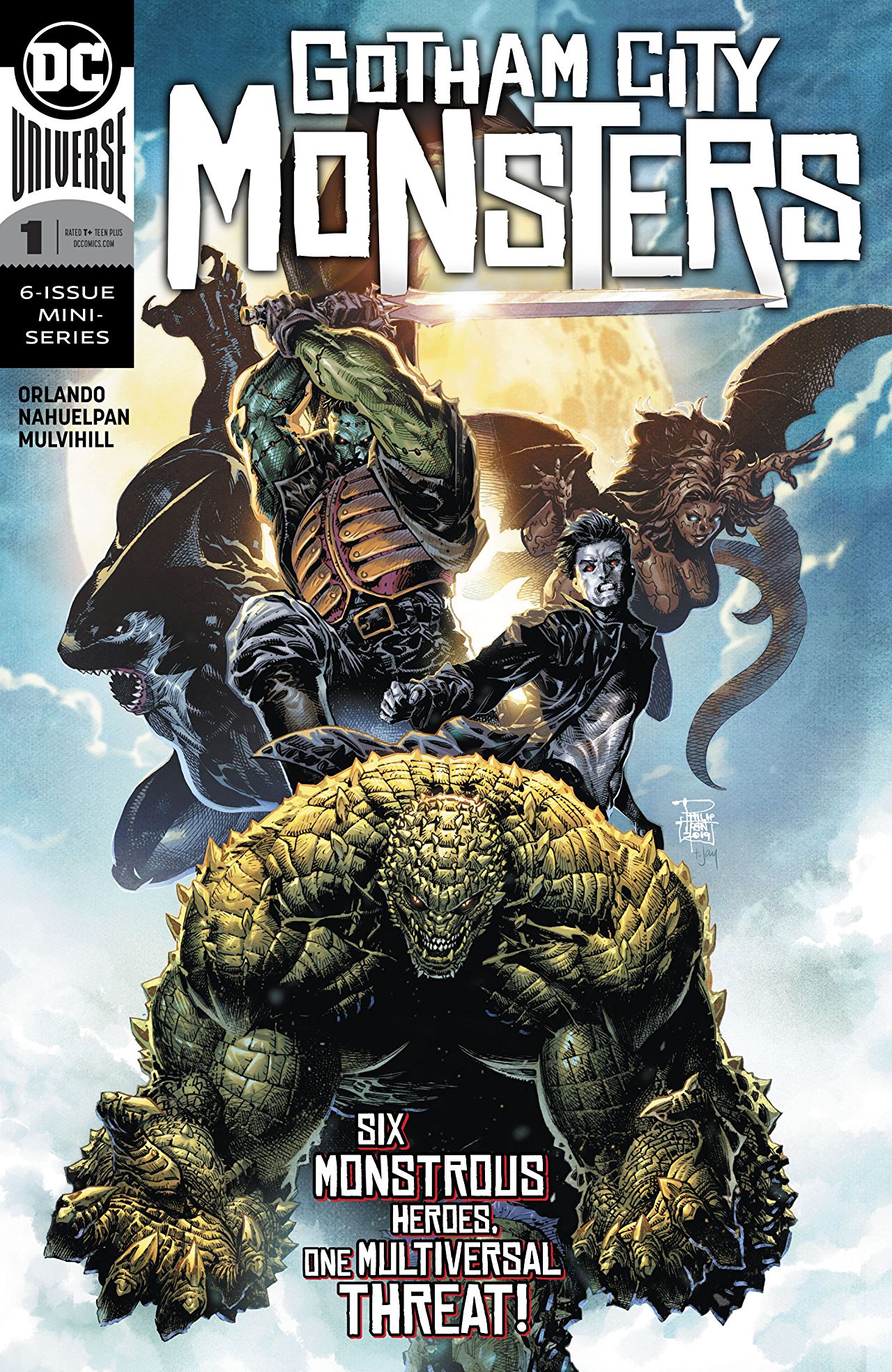 Overview: The lives of the monsters of Gotham City are about to intersect as a force is summoned.

Synopsis (spoilers ahead): Unlike the rest of Gotham, which finds itself in the grips of Bane, Monstertown has grown and thrived.  Under the streets in the sewers, however, a battle is going on and we find Andrew Bennett, also known as I, Vampire, battling a horde of Mad Monks, who he once led.  The Mad Monks are gathering innocent people to serve as a sacrifice to a new, vicious leader. As he dispatches of the group of monks, he attempts to suck the blood from one of them, only to realize that it is tainted.  He kills the evil cleric, vowing the same for his master.

On the streets of Monstertown, Waylon Jones, better known as Killer Croc is making his way back to his hotel room after seemingly having a bad day looking for a job.  While many jobs are available to him as street muscle, Croc is looking for something bigger and better.  His friend Tusk, who works the front desk of the hotel tries to pep him up and offers a ticket to join his for an opera performance at the nearby Magus Theater.  Croc tunes the offer down, determined to carve a new life for himself in Monstertown.

In Gotham Harbor, a boat delivering goods to Bane is under attack by the whale/human hybrid being Orca.  As she grabs the leg of one of the passengers, it detaches from the man’s body and dissolves in the water.  The rest of the man’s body follows suit.  Orca returns to an underwater cave and reminisces about a nephew she hasn’t seen since the accident that created her.

Away from the harbor, Lady Clay (sometimes called Lady Clayface) makes her way to her safe haven.  As she stares at herself in a mirror, she takes the form of the passenger from the boat Orca attacked previously.  On the street below another clay figure takes shape and makes his way towards the Magus theater.

At the train station, Frankenstein is battling another beast who is telling him of the arrival of his master. Before meeting his end at the barrel of Frankenstein’s gun, the monkey tells of how the return will occur – with a sacrifice of those attending the opera at the Magus Theater.

As the opera begins, I, Vampire approaches Frankenstein at the top of the theater.  They’re hunting the same guy. Bennett knows from the taste of the Mad Monk’s blood that the being they’re chasing – Melmoth – is an alien.  He insists they go and stop him.  Before this can happen, however, Frankenstein slashes Bennett in half with his blade as he believes he’s already tainted with Melmoth’s blood.

While this is happening on the rooftop, in the theater, other mandrill monkeys are performing their ritual to bring about their master.  The ritual takes the lives of those in attendance, including some important individuals – Orca’s nephew, Tusk, and the clay figure.  As their lives fade, a figure rises and steps out from a vat of boiling liquid hidden behind the stage. Melmoth has come to “save the multiverse.”

Analysis: This story brings together characters that have been in DC continuity for a while that may or may not have been a part of Rebirth’s continuity.  Everyone knows of Killer Croc’s time in the Suicide Squad.  Frankenstein has made several appearances in Rebirth, including during Tomasi’s and Gleason’s run in Superman. He also had an appearance in the Wonder Woman/Justice League Dark crossover. I, Vampire (Andrew Bennett), as far as I know, hasn’t been seen since his series in the New 52.

Orlando’s story is an introduction of the main players that we will see throughout the series with the primary focus being on Frankenstein and his long-time enemy, Melmoth.  There is some action sprinkled throughout the intros, but not a lot.  I do expect this to change though.  It would have been nice if the story had contained editor’s notes to guide readers who may be getting exposed to these characters for the first time (Ironically, the one editor’s note that goes in this direction was for the character everyone should be most familiar with – Killer Croc). It’s understood that the reader should know how Monstertown came to be in the pages of Night of the Monster Men (I am) and know the background of the key players (I am for some of them, but not for all).  So it is a good story from an intro standpoint; I would have preferred, however, that some more guidance would have been given to the characters’ past. But that’s more of an editorial matter, not a creative one.

Amancay Nahuelpan’s art is really good for the type of dark story this will be, but it’s the colors by Trish Mulvihill that really set it apart.  There is a vivid blend of colors against dark backgrounds that truly bring focus to important points on the page.

Final kudos go the Orlando and Nahuelpan for how the create the catalyst that will bring the team together – the deaths of individuals important to them.  I’m interested to see how they will come together to battle Melmoth.

Final Thoughts: The first issue is a basic intro story with a nice mixture of action sprinkled in.  It’s the art, however, that gives the issue a higher rating.  On the other hand, I am hopeful we see things progress as the story moves forward.  There’s definitely enough to keep my interest for now.