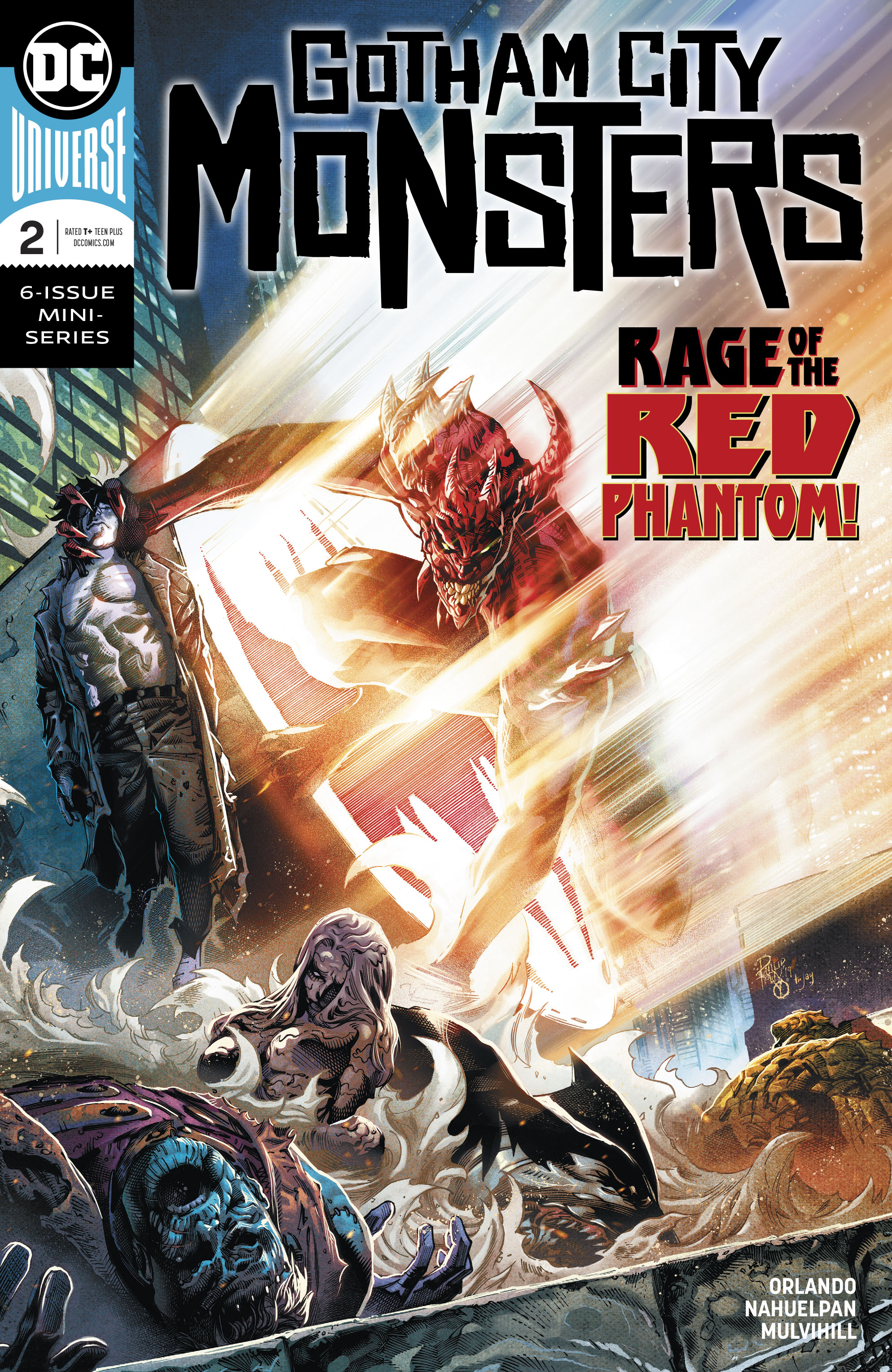 Overview: Frankenstein gathers his team to take on Melmoth, who has entered Gotham via Monstertown on his ever-lasting quest to save the multiverse in his own sick, dark way. But will an early mistake by the band of “heroes” destroy their mission before it truly begins?

Synopsis (spoilers ahead): On the roof of the Magus Theater, Frankenstein is calling out his newly-risen arch-nemesis, Melmoth, who was resurrected last issue. Andrew Bennett is still healing after being cut in half by the former S.H.A.D.E. agent. Bennett criticizes Frankenstein for not allowing him to destroy Melmoth before he was resurrected. Frankenstein counters, however, and says that Melmoth had to return in order to be destroyed.

Inside the theater, Melmoth is looking over the dead bodies used to bring him life, while above him, a young man trapped within a man, bangs against the glass, trying to break free. In his anguish, he transforms into a demon-like being and the mirror trap shatters. As he lands on the stage, Frankenstein and Bennett make themselves known and join the demon in fighting against Melmoth monkey-like henchmen, the Martian Mandrills. As the battle continues, Melmoth orders a Mandrill to prepare the cauldron (the same one that brought about his return). The monkey sacrifices itself by jumping into the boiling cauldron that eventually explodes, leaving the theater filled with a cloud of thick, green smoke.

In another part of Monstertown, Lady Clay regains her form inside of her apartment after spending time out on the streets of Monstertown.  She is, however, feeling incomplete. She realizes a part of herself, a mere feather, has not returned to her and is missing.

Dr. Grace Balin, the human-whale hybrid known as Orca, is interrogating a pirate she accuses of stealing from ports she protects. While questioning the bound poacher, a story comes over a radio discussing the chaos that occurred a Magus Theater. A woman is crying for help in locating her son who was in attendance at the performance. She realize that the woman is her sister and the child missing is the nephew she had longed to meet, Jonah.

Back at the theater, the smoke has cleared, and Melmoth and his goons have escaped. The demon, known as the Red Phantom, has returned to human form and introduces himself to Frankstein and Bennett. He tells how he came to be the being that he is and how he has protected the theater for some time before it was desecrated by the Melmoth. He’s determined to make him pay. Bennett, full of ego, claims his intention to find and deal with the Last King (another name given to Melmoth) on his own.

While grieving the missing part of her clay form, Lady Clay is approached by Frankenstein. He tells her he knows of the murderer and vows to help her exact vengeance. He eventually appears before Orca and makes her the same promise to avenge the death of her nephew.

In his hotel room, Waylon Jones, Killer Croc, anguishes over the multiple failures in finding an honest job. As his anger builds, Frankenstein enters with Orca and Lady Clay in tow. Croc lunges at him, but he eventually calms down as he realizes Frankenstein isn’t his enemy. Croc is told of the fate of his friend, Tusk, who was also in attendance at the theater. He agrees to join the team for one last muscle job to avenge his friend’s death.

In the sewers of Monstertown, Melmoth and his group of followers make their way to a makeshift shrine in his honor. There, he tells them of his dark plan to “save” the multiverse that has been bleeding since the Source Wall was broken back in Dark Nights: Metal. As he’s talking, he’s attacked by Bennett, who’s succeeded in finding him on his own. He reminds Melmoth of what he’s done by tainting the blood of the Mad Monk that led him to the Last King’s lair. He grabs Melmoth by his neck. Before anything else could happen, Bennett is paralyzed and brought into a trance.

As Bennett falls to the ground, Melmoth reveals the pills the Mandrills gave the Mad Monk allowed him to control him And now that Bennett has drunk the tainted blood of the Mad Monks, Melmoth now held control over him as well.

Analysis: This series continues to impress. We’re introduced to a brand new character, Red Phantom, that I hope we have the opportunity to learn more about if not in this series, somewhere down the line. He seems like he could become an interesting if developed right, perhaps in some sort of mini spin-off. Orlando also does a decent job in tying the first two issues together via Andrew Bennett’s first interaction with the Mad Monks. It will be interesting to see if Bennett remains in the thrall of the Last King for the remainder of the series or if he is able to somehow break free.

Amancay Nahuelpan’s art and colors by Trish Mulvihill continue to be rightly made for the title. While colors are vivid, they’re not overly bright, which helps lead to knowing that we’re reading a dark comic. The nice blend of reds inside the Magus Theater adds a touch to the Red Phantom’s story of being bound to the theater and the theater is a part of him.

Tom Napolitano’s letters clearly let you know who’s speaking. But what it also does a good job in doing, in corroboration with the colors reminds the reader that this is definitely a monster book with the main hero being a monster himself.

Now if there is one negative, it’s that there is a bit of off-paneling. Outside of meeting Red Phantom, how does Frankenstein know to seek out the monster who will make up his team? Clearly, Frankenstein, the former S.H.A.D.E. agent has his ways. It, however, would be nice if we could see more of how he does this. This possibly could have been answered if more than one page had been devoted to each member meeting. Perhaps I’m secretly wishing that this was more than a six-issue miniseries.

Final Thoughts: Gotham City Monsters remains a good, quick read. We’ve already been treated to one twist in the plot. If there’s an issue at this point, it is that it’s only a six-issue series. It will be interesting to see how Orlando ties the story up. Then again, no one was expecting to see more of Monstertown after Night of the Monster Men. Perhaps we’re due for more in the future.