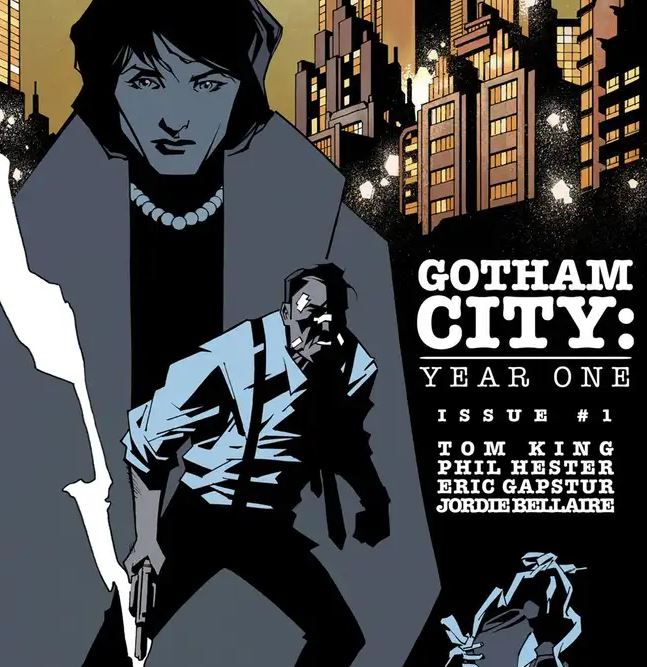 Overview: In Gotham City: Year One #1, Slam Bradley finds himself at the heart of the kidnapping of baby Helen Wayne and at the root of the cause of Gotham’s misery for the next half-century.

Synopsis (spoilers ahead): Gotham City: Year One #1 begins in March 1961, as amid rumors of baby Helen Wayne, daughter of millionaire Richard and Constance Wayne, having a deformity, private detective (and Korean War veteran) Slam Bradley receives a visit from a young woman calling herself Sue, paying him exorbitantly to deliver a letter to the Waynes. Slam sends his partner Johnny, armed with his gun, to tail the mysterious woman. Slam, a bit insulted at being used as an errand boy despite his ten-year sterling reputation, walks through a Gotham that seemed like a better tomorrow to new Wayne Manor, where Wayne security (including an old cop co-worker of Slam’s) assaults him, and they begin a fight – interrupted by Constance. She takes him to wait upstairs, then Richard appears, and they read the letter, a note from Helen’s kidnappers. The Waynes leave, and their security guards beat and torture Slam in the basement, refusing to believe how he got the letter.

Slam wakes to Constance telling him how Helen was kidnapped – and that the Wayne marriage is strained at best. When Helen was kidnapped, a letter marked with a crude bat symbol ransoming the baby for $100,000. The letter Slam delivered implicated him, leading to his torture and Constance’s distrust. They plan to give him the money, and Loder, head of Wayne security, tells Slam he thinks the black citizens of Gotham kidnapped Helen in revenge for Wayne’s factory polluting their water.

Heading back to his office, Slam gets a call from the cops and meets them in the South (primarily black) side of Gotham, where they accuse him of the murder of his partner Johnny.

In the present day, an ancient Slam tells Batman the story of his ancestors and insists that until Batman knows Slam’s story, he knows nothing of the fall of Gotham.

Analysis: Tom King’s latest book continues the hardboiled detective theme he’s been pursuing for the last few years in other books like Rorschach and the currently releasing Human Target.

His main character here in Gotham City: Year One #1, Slam Bradley, is one of the oldest Detectives that Detective Comics Comics has to offer, and King roots him firmly in time (unusually for a Batman comic), giving his experience a lot of texture. However, apart from his pique at being used to deliver a message, Slam doesn’t display much personality, being mostly the victim of other people’s plans and passions in this issue. Hopefully, more personality will shine through once he takes a more active part in the story – though King’s tendency to favor more passive heroes or protagonists – bug-like characters struggling against an uncaring or actively evil world – doesn’t necessarily bode well.

Slam’s fascination with Constance Wayne indicates a potentially adulterous love affair if noir tropes continue to dominate the narrative, and given Constance’s passion, potential for cruelty, and beauty, she fits well within both the femme fatale trope, as well as King’s preferred heroine/female lead in most of his books.

The whole thing just doesn’t quite rise out of the expected – the death of the partner hits with all the surprise of a pie hitting a face in slow motion, the torture scene robs the reader of much sympathy for the Waynes, and the passivity of Slam doesn’t provide much of an emotional hook either. Though the polish and rhythm of King’s narration and dialogue, as well as small details like the opening newspaper page (strikingly similar to the opening of Batman: Year One), the connection between Slam and Constance through their smoking, and the owl of baby Helen’s blanket, catch the reader’s interest enough to drive through to the ending, where King tries to connect his story to the present day and Batman himself, it still feels much too timeworn and without a real spark of sympathy or compassion.

Artist Phil Hester has a legendary string of work going back at least two and a half decades. He specializes in very stylized, strongly lined work, with careful composition and beautifully detailed designs. He’s at the top of his form here, showing expressions, body language, Gotham’s varied locations, and the power of Wayne Manor quite well. Though not much action occurs, the comic never reads dully – King and Hester have a beautiful rhythm of storytelling together.

Though not strictly a two-tone coloring job, Jordie Bellaire provides a mostly two-tone effect, mimicking the effect of black and white film, though she varies which colors contrast with each other in each scene for effect. A similar combination of strongly stylized art and a two-tone coloring pattern appeared in Greg Rucka’s first run on Detective Comics back in 2000, another strong entry in Batman comics that echoed the styles and patterns of hardboiled detective fiction and film.

Series artist Phil Hester provides the main cover – a two-tone poster-style cover featuring Mrs. Wayne (pearls on display), a bandaged Slam holding a smoking gun, and tiny tennis shoes against a city skyline – pretty perfectly capturing the hardboiled detective flavor of the book. Ryan Sook provides the variant (all covers for this book are cardstock, which DC predictably uses to push the price of the book to $5), a beautiful painting style, with the Waynes greeting Slam getting out of an old car at their gate, a gorgeous reflection effect beneath them, and the shadow of a bat behind the house – once again in a mostly two-tone color scheme. David Marquez, fresh off of his collaboration with King in “Killing Time,” gives us the incentive variant, a shadowy Slam in the rain behind the Waynes holding their baby, a murder chalk outline between them.

Powerfully evocative art by Phil Hester and grippingly atmospheric writing by Tom King doesn’t quite lift this opening chapter of their story from the standard patterns of the hardboiled detective tale.