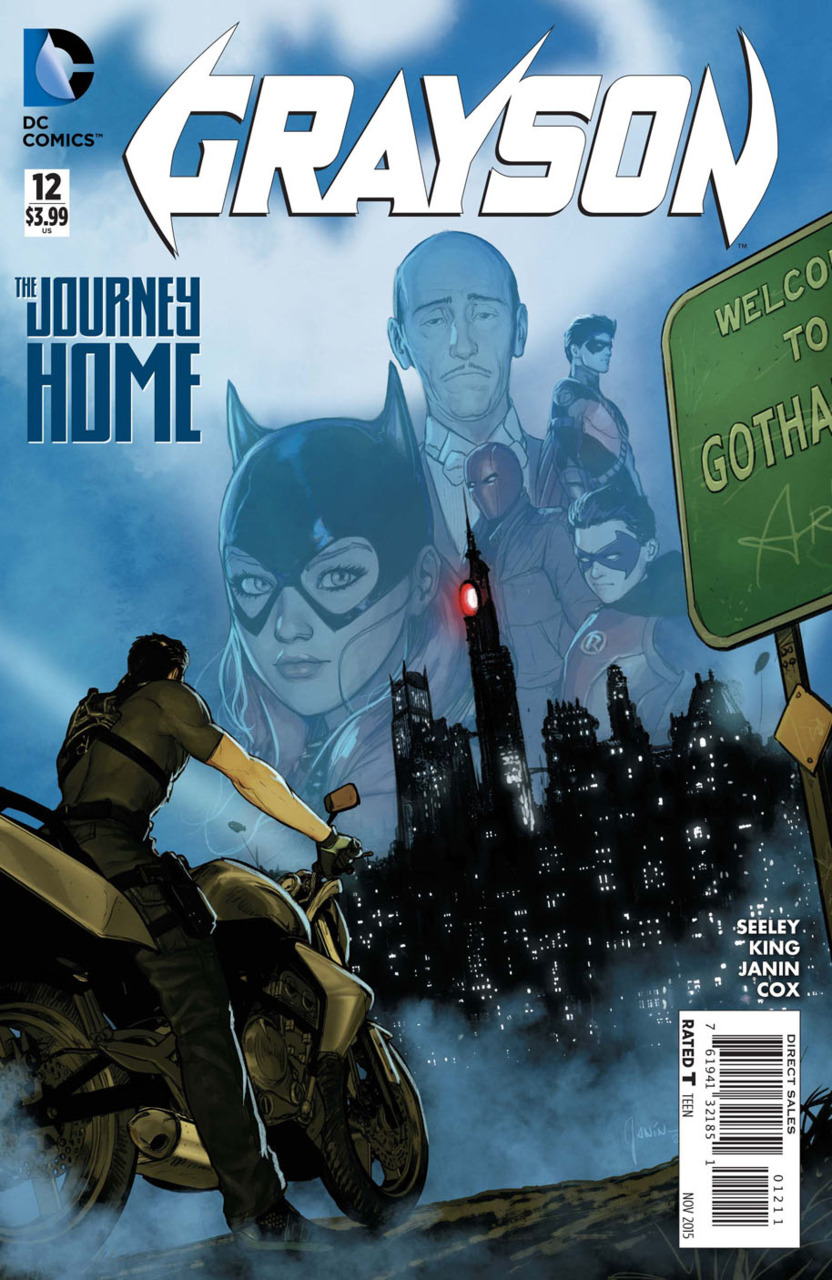 Prior to this issue, I had been wondering when we would finally get to see Dick return to Gotham and confront the family he was forced to lie to in order to protect them. With this issue, we get to see those interactions. While reading, I was kept guessing as to what Dick was up to with revisiting everyone in the family. Although it seemed likely he had an overall plan, it did not diminish the emotional encounters he had with each member.

I thought using the fact Dick needed help with uncovering the identity of Agent Zero was a great way to involve the rest of the Bat-family and give us some great scenes. With Dick coming home for the first time since his apparent death, this issue was opened to some very emotional moments. Each scene between Dick and the other members was filled with word balloons from various moments in his past with that character. Even if you could not pinpoint where each word balloon came from in the timeline of the character, it still was cool to see the word balloons progress through Dick’s life.

I loved the fact that each panel we got to see the past versions of each character as if they were memories. The art team did a great job at integrating the old looks of the characters and merging them with the new iterations of the character. Staying on the subject of the art, I have been a big fan of the art team on Grayson since the beginning. They capture action really well and I really enjoy how they bring Dick’s acrobatic skills to the page and make it seem so realistic. I really do feel like I am seeing a Grayson leap off a bridge and connect with Babs halfway down on a trapeze bar.

The dialogue in this issue was a highlight for me as well. The talk between Dick and Barbara was very touching even if it was part of his plan to give her a code. I found the meet between Damian to be very emotional. I always liked their partnership and bond. Although Damian usually is not one to “jump for joy”, I felt that they both had reason to given how long they had believed each other to be dead.

The only disappointment I had was at the end with the realization that Dick, although reconnected to the Bat-family, would be returning to Spryal. I was very much looking forward to him staying in Gotham and transitioning into the story line for Batman and Robin Eternal.

Between the artwork and the emotional dialogue, I loved this issue and it was great getting to see the Bat family reconnect. Writers Seeley and King give us some great moments between each character and do a great job paying homage to where these characters have come from in their history of crime fighting.

The issue begins with Alfred helping Dick get into costume to become “Mr. Sparrow” so that he can talk to Bruce. Dick talks with Bruce and asks him if he is happy. Bruce admits that he feels joy now. As they are talking, they are interrupted by Agent Zero crashing through the window and knocking out Bruce. Agent Zero then threatens to reveal Bruce Wayne as Batman unless Grayson comes back to Spyral. She offers him twenty four hours to say goodbye to the Bat family before returning to work for her. She leaves and Dick tells Alfred it is time “to perform”.

The rest of the issue is Dick meeting with each member of the Bat family in various places and telling them how each one means to him and why he did what he did. He also gives each one an item from the bat cave that has some significance to their relationships. Each time he leaves a member of the family, they are left asking if he is using some type of code. It is revealed that he was using the Cluemaster’s code which, with each item, the family is able to decrypt Dick’s Hypnos and help him determine the identity of Agent Zero.

The issue ends with Dick seemingly returning to work for Spyral. Agent Zero tells Grayson that Spyral is his new family and that he is not alone. Dick agrees with her and, now being reconnected with the Bat family, he says with a smile, “I’m not alone”.