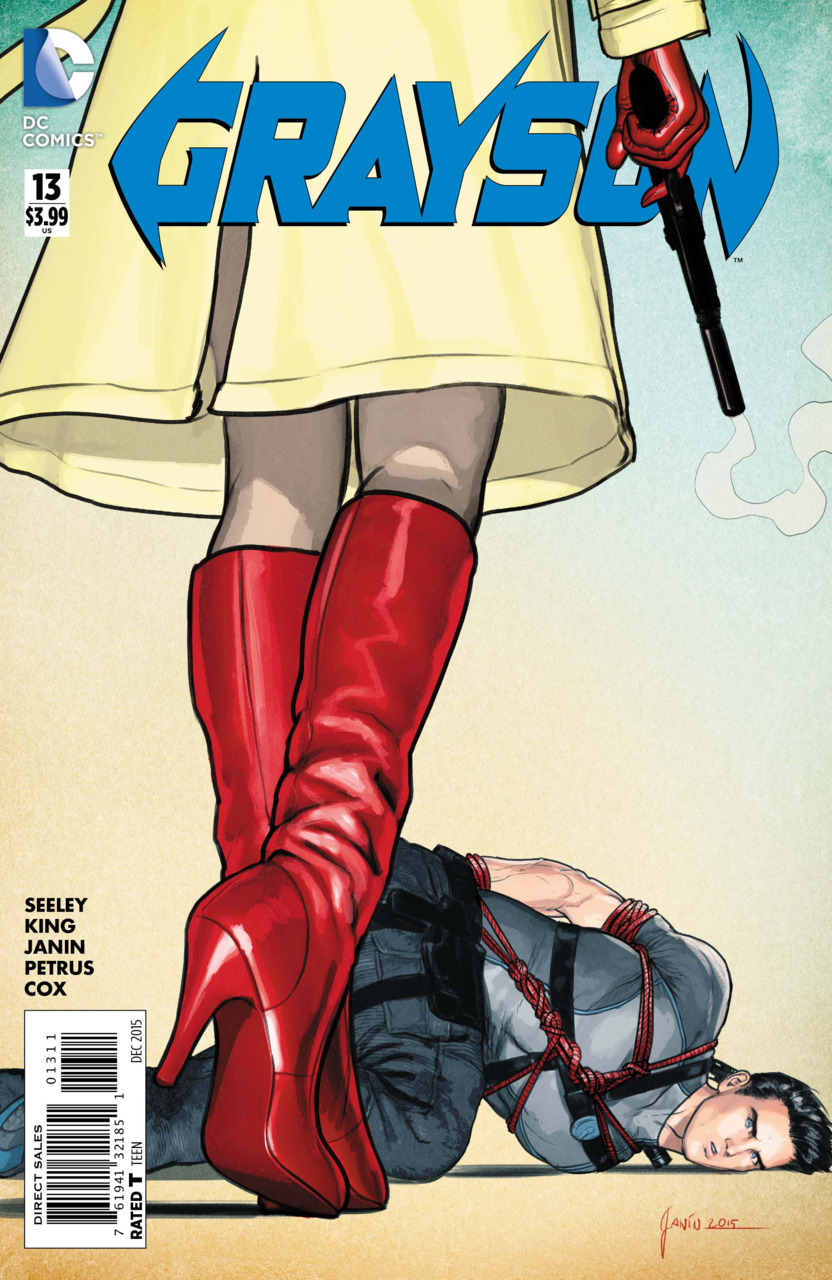 First of all, I want to thank Bill for covering last month’s issue for me. It was an amazing issue, and he did an amazing review on short notice, and I 100% agree – that issue deserved a four and a half.

Well… This comic has stirred some people up over the past week. Generating lots of discussions, and controversy over how Dick is treated in this. Now, I’ve never been in these people’s situation, so I can’t speak for them, but I didn’t get nearly as uncomfortable as they did. Of course, I think that if you don’t like something in comics, you don’t force an apology out of the creators, you stop reading it — but that’s another story altogether. I thought this issue had it all; humor, a pre-52 villain (whom Dick faced as Batman), Dick playing double spy, TIM FREAKING DRAKE…, regular guest – Midnighter, and a fight with a punk robot!

The art team is still one of the best in the business. Mikel Janin is THE most consistent artist I’ve ever seen. Sometimes artists will draw a character, and – just because it’s a hard thing to do – it just doesn’t look like the same person. But Mikel’s characters always look the same, no matter the angle. If you look at the credits, you’ll notice that there are multiple inkers — Janin tends to do that a lot, and I never notice a change in the art, so good on those guys. Jeremy Cox’s colors add the vibrancy and playfulness that matches Dick’s personality. Also, if you notice the credits, you’ll see (for the first time) – Batman created by Bob Kane with BILL FINGER. It’s in all the Bat-books starting this week, so that’s awesome for the Finger family.

Dick is getting a physical exam after leaving and coming back to Spyral, just in case he picked up anything that might be used against them… But it’s not on him — its inside his head… His brain… I’m talking about his brain. He’s — decided to learn all of their secrets. (Why is that so hard to say?)

Anyway – later, on a shipping-ship (Gosh I’m having trouble this morning), Tiger Shark appears, and is gonna take some rare animal to make some fancy underwear out of (Not really, but that’d be funny). But Dick and Tiger are disguised as members of the crew, and take everyone on team Tiger Shark. The ship captain is grateful, and tries to marry off his daughter to Tiger, giving Dick an opportunity to talk to Tim Drake. Tim has hacked his way into the computer files of Spyral, and has found pictures across the Internet matching Agent Zero’s (or Luna Netz’s) facial recognition (even through the Hypnos implant) in many pictures throughout Dick’s life. She’s been watching him for a long time (we even see a scene from issue one of Batman, where Dick was disguised as Joker — just thought that was cool). Tim notices that someone is trying to delete the pictures as they appear, and he traces it to a place owned by a company called “Ewigen Kreis”, which I assume is German — meaning Eternal Circle… Or a Spiral (side note: I love Snyder’s writing, but Seeley and King write much better riddles than his impossible gibberish). It seems as though weapons research and human experimentation runs in the Netz family. Tim suggests that he try to seduce Helena to get information, but Dick recalls that he has nothing on her. But he does have someone else he could charm – wanna take a guess?

Helena threatens Checkmate (Grifter is among them) if they double cross them.

From the God Garden, Gardener teleports a punk-rock robot – Ladytron – to the same building discussed earlier by Tim and Dick, to see if it’s been used recently. But this has all been a ruse set up by Dick and Midnighter to pit the God Garden up against Spyral, as Midnighter gets in close to Agent Zero… It’s unclear if she is on to them or not, but she arms the building that Dick, Tiger, and Ladytron are fighting in (Also, it looks like the fat Russian guy from issue one is in the background of the cafè – don’t know if that means anything, just an observation).

Another awesome issue with lots to chew on… Only thing missing, is a big emotional moment.