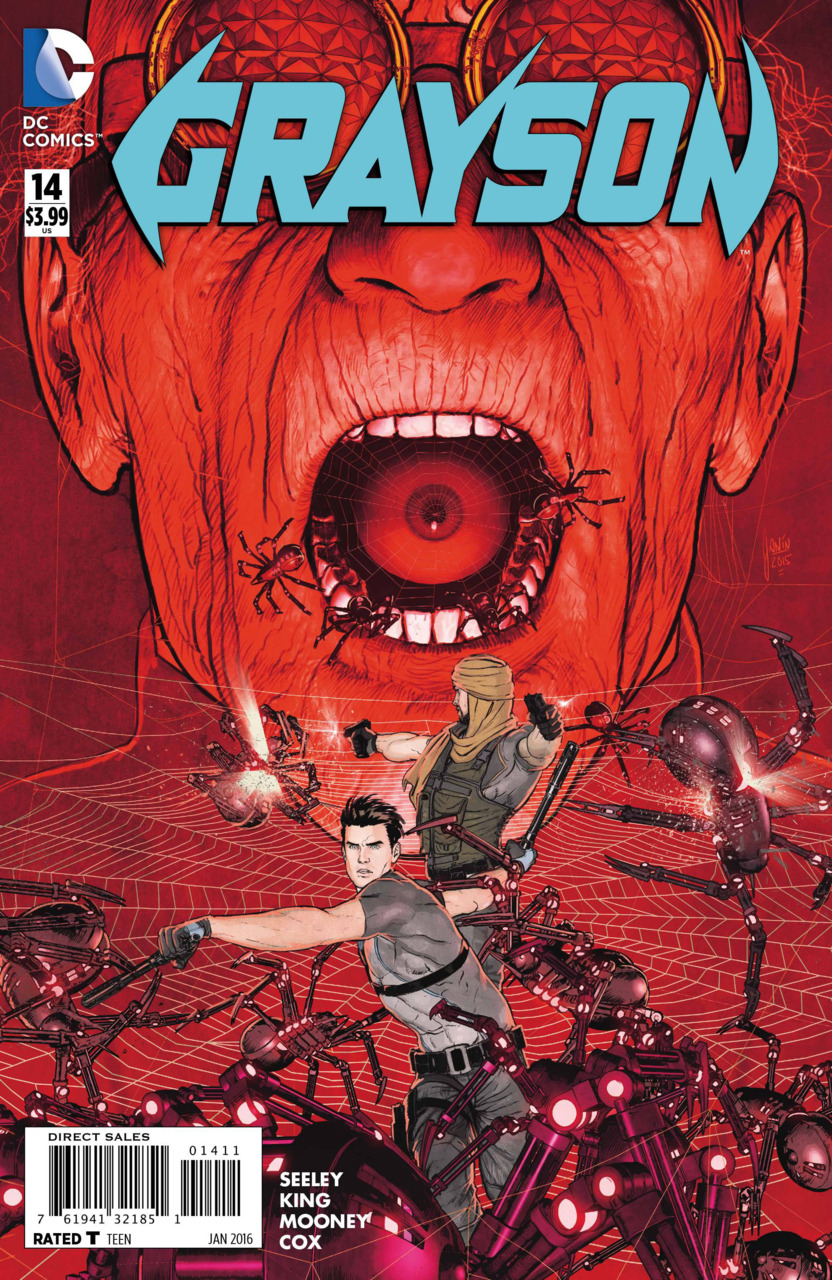 This was just a solid issue of Grayson. Tim Seeley does the script this issue, and has one of his tighter storylines as of yet. But, of course, he finds a moment to let some of that crude humor come out when he gets the chance. My only real complaint, is that the ending was built up to be this very climatic event… But it wasn’t nearly as spectacular as it was supposed to be.

Stephen Mooney does another fill in issue for Janin, and does some of his best work yet. His line work isn’t as clean as Janin’s, in fact, it’s more rough. But it’s balanced out well with simple background work, granting attention and focus to what he wants you to see. He also puts some extra line-work in certain areas, and does a great job with facial expressions, adding some acting work to his art. I would really like to see him on a monthly title — I think he’s certainly ready for it.

Jeromy Cox is awesome on his coloring. He has no slip-ups, and he always adds a consistency to this series that is definitely needed.

I feel like I don’t give letterists enough credit, but Carlos M. Mangual had moments in which he shined. There were times where, if it weren’t for Mangual’s way of lettering, you wouldn’t know who was talking.

My feelings on it are this; if you are regularly buying this comic, pick it up when you go to the comic store. It’s not something you have to drop and buy immediately. If you have been thinking about jumping on to this series, I’d suggest you wait. This issue is one of the few non-jumping-on points.

Also, that Janin Looney Tunes variant cover is awesome, and I need it.

We open with Dr. Otto Netz telling a story to some unknown listeners…

Meanwhile, Grayson, Tiger, and Ladytron are fighting a swarm of Spyral spider-drones, wondering why their own agency’s tech is attacking them.

Midnighter is still spying on THE spy… Agent Zero, while she seems to be the one controlling the drones. Midnighter decides he’s done his good deed, and hits up the best club in town.

Grayson and Tiger use Ladytron as a battering-ram to get away from the drones, and then Ladytron blasts the remaining drones, giving them more time. Tiger asks Ladytron to emit an electro magnetic pulse, to destroy the drones. But Dick needs to hack into the computer, as well as the drones to get all the information he can get about Luka Netz. He knocks Tiger out… Again. And uses his Hypnos implants to make Ladytron hallucinate, thinking she’s a child in a toy-store, about to get a toy robot. Dick uses this, and her, to hack into the nearby computer. He asks Ladytron for information on Agent Zero, Luka Netz, and Spyral… She relays him everything we are seeing in a flashback that started this comic, and has continued throughout.

As Otto Netz is explaining to his daughters as to why Spyral exists, and how one of them will become him… In a literal sense. He will possess one of them.

The leaders of Spyral demand Helena send the drones to attack and kill Dick, and she does so against her own judgement. However, Dick has Ladytron emit the EMP, and everything goes black… Even the club Midnighter was hanging out at, disappointing him greatly, but making Helena happy, as she knows Dick is okay. Suddenly, Tiger wakes back up, and attacks Dick. He’s getting really tired of getting cold-clocked by Dick, and is going to kill him. As he is getting choked out, Dick says they need to take down the Netz sisters, Helena, and the rest of Spyral.