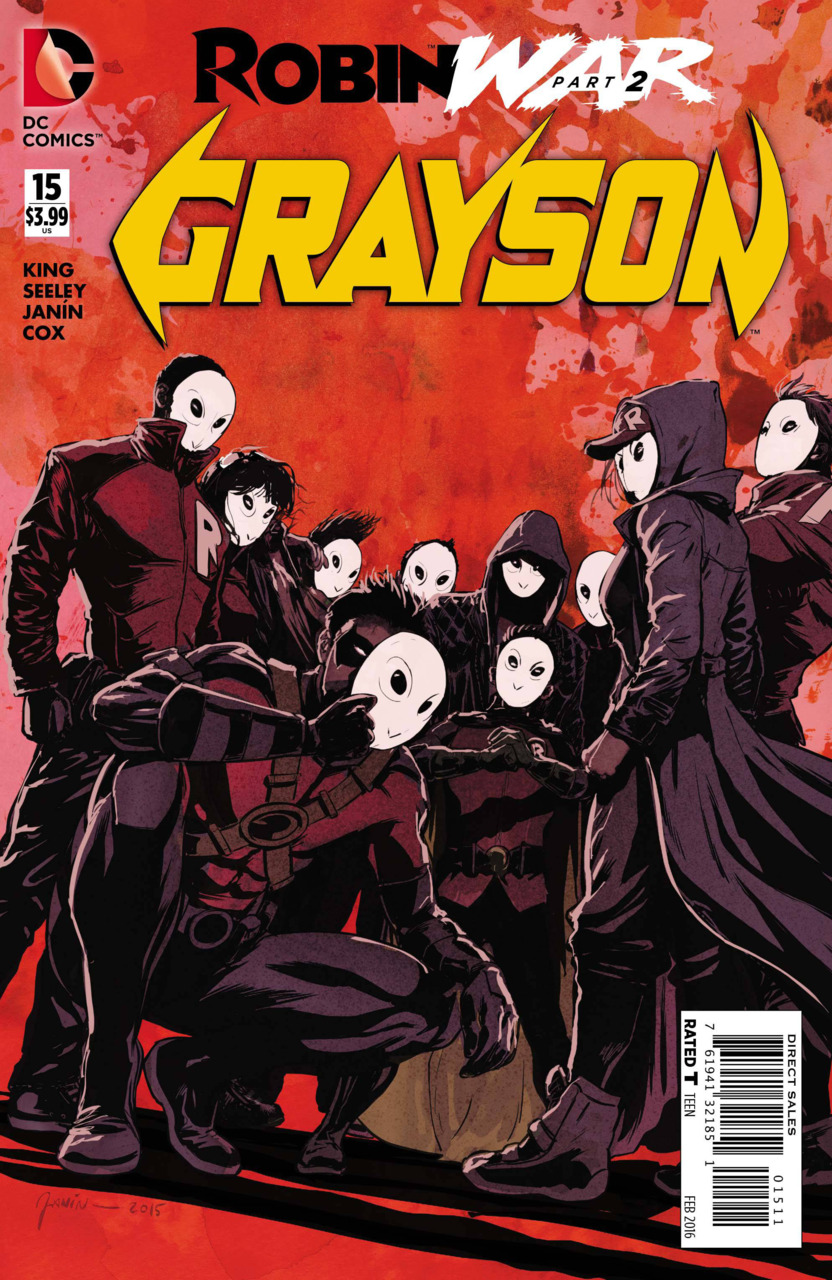 Disclaimer – if you have not picked up Robin War #1, you will be lost, as this is part two of that story.

I appreciate how DC handled this crossover. They have on the cover which part of Robin War this is, and then they have tie-ins, that aren’t necessary to read, but take place at this time. This is the best format, in my opinion, and hopefully they continue this with future events.

Tom King is becoming one of my favorite writers. It seems as though everything he touches is amazing. And considering he wrote Robin War #1, then him writing Grayson #15 as a part two is a must read for people following that story. And if you are hesitant on this crossover event, I’d suggest picking this comic up, because it’ll probably win over the most jaded fans. There were some who were mad about Dick leaving the Nightwing persona behind and becoming a spy, and who still are. But this story arc is hinting that Dick may not be done with the Nightwing persona, and the Court of Owls are trying to manipulate things in that direction.

King touches on the bond brothers have, with there being bickering and name calling, yet a trust you don’t get with anyone else. Also the responsibility the oldest feels in taking care of the others.

Mikel Janin has some solid work for the most part, but for the first time, I felt like he made some weird choices for the sake of variety in the faces of a few characters. Some looked bloated, like they were stung in the face by a bee, and hey, maybe they were and I just didn’t know. But it was only on that first page, I just didn’t like how Duke’s face looked. Janin got tighter after that.

Jeromy Cox still has the vibrant colors that he maintains throughout the series, but he also gets to contrast that with the bleakness of Gotham. However, he has yet to take the reins and capture any storytelling aspect. He also gives everyone that same vibrancy that he gives Dick instead of giving each individual character a tone.

Carlos M. Mangual doesn’t have an opportunity this issue to give anyone a unique font for any particular reason, but he does have a great placement of the lettering so that your eyes follow the page the way they should.

So after the events that took place in Robin War #1 Dick, Jason, Tim, and Damian start Robin School. They each pair up with the best one in thier group, and leave the rest to train longer, while they prepare the ones closer to being ready. As it turns out, they pair up with the gang we’ve come to know from We Are Robin.

Throughout, we see the brothers talking to each other about how the training is going. And learn that Dick is sending this conversation to the GCPD (I was wondering why they weren’t using their real names here). Dick splits the teams up into groups, and they all get captured. Damian, though, realizes that it was Dick who set them up.

Dick leads Duke up tot the rooftop, knowing his fear of heights, and tells him that Batman taught him that being Robin is about one thing – family. And he’s doing this to protect his family.

He jumps off the rooftop, and a member of the Court of Owls is watching from a nearby building, saying they’ll take care of him.

This had so many great moments between all of the Robins, and I loved it for that. It seems Dick’s days as a secret agent are coming to an end, and we may possibly see Nightwing again… I just hope it’s by this same creative team.