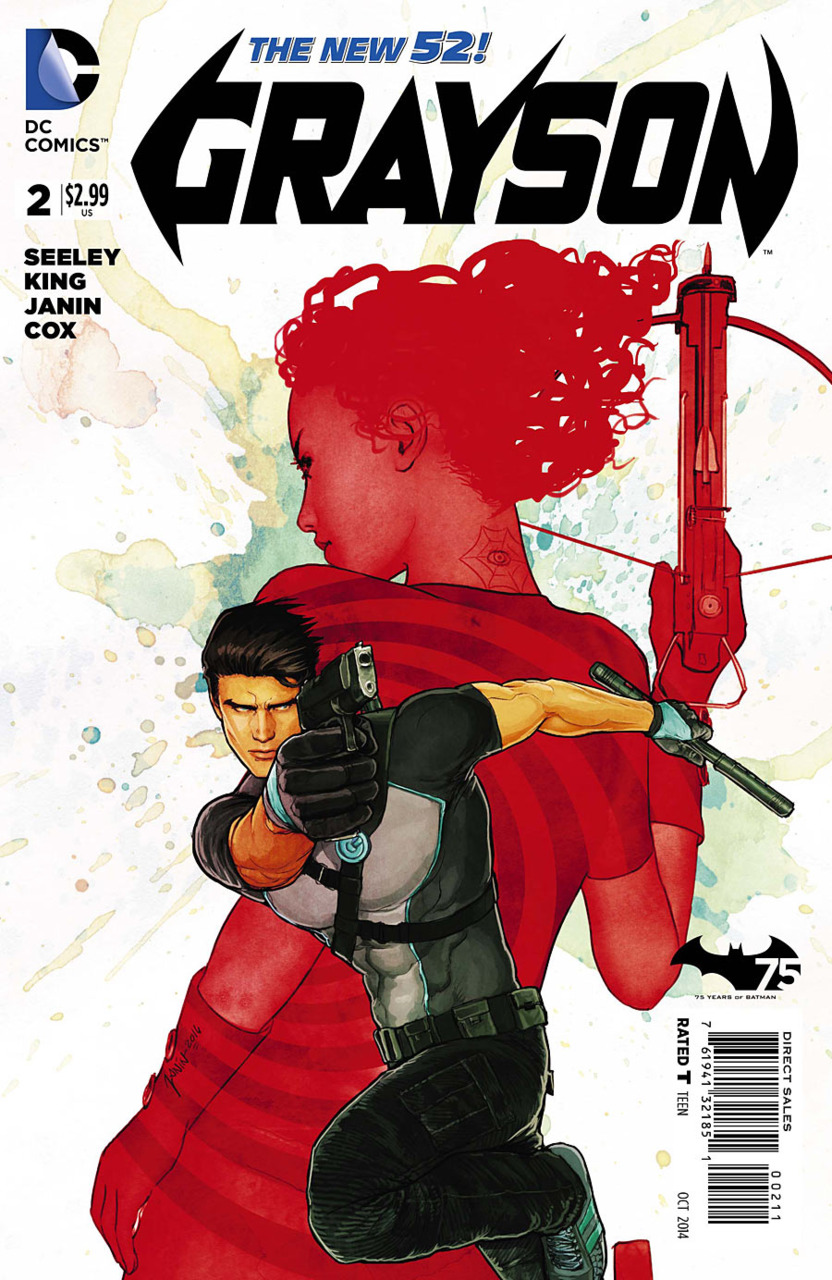 With this being the second issue of Grayson, I continue to find this series doing a great job of what it needs to accomplish. It has a great cast of characters who are just as interesting as the character we buy the book for. It’s placed in a unique, different, separate world that is so interesting and yet it still has ties to the world around it in use of character development instead of using it to guide the story. In that way, Seeley and King are able to brilliantly use the world in which Dick is currently living in and tell their own story. Something I was frustrated with the last Nightwing run, was that it felt too tied down to Batman and now it can finally cut loose. And I love how they continue to incorporate crazy Grant Morrison stuff in here.

The only problem I had this issue was the pacing. There was a point where it made a change so drastic and confusing it was jarring to me instead of being exciting. However, the second read-through, it made much more sense.

Mikel Janin’s art is so pretty. The dude continues to find ways to amaze me. When he was on JL Dark, he loved to use electricity and magical arts to break up the panels. Here, he plays it a little more straight forward, but I do see him playing with the Spyral motif every once and awhile.

Helena is having the girls at the school target practice when Hood shows up. He is delirious and passes out.

Dick is able to communicate with Batman for a brief moment. He asks about Alfred and Barbara are taking his “death”, but then says he doesn’t want to know.

We catch up with Midnighter (Is this dude going to be a regular?… Weird.) who can’t remember the guy who he fought last issue (Hint: it was Dick), and the cameras can’t catch his face either, as it’s just a spiral.

Helena and Dick are getting a report from Mr. Minos, explaining that agent 24 (or Hood… That’s right. Hood is a Spyral agent.) was after an enhanced robotic stomach, when whatever happened to him, happened. But he is missing three toes and one finger.

Dick and Helena make their way to the site. And then it switches time completely and we see Dick getting hit from every direction seemingly at the same time. He uses some tricks to throw the person off balance and she gets away. Our duo make their way down to the girls lair, where we find bones and some uniforms belonging to other agencies in the DCU. This woman has the artificial stomach inside her and it has given her super speed. She has to continually consume more calories to survive or her body will wither away and since she kept being attacked by agents, she just ate them. So apparently that’s where Hoods toes & finger are…

Helena offers her to work for Spyral, but Dick doesn’t agree since she ATE PEOPLE… Helena uses the Hypnos to knock Dick out, while she offers the girl a job. The next day, things are awkward between Dick and Helena, as Dick doesn’t agree with letting the girl off the hook. We also see that Spyral has removed the artificial stomach from the girl (named Dr. Ashemoore) and welcome her to the team, as she’ll be working with Dr. Netz. Mr. Minos goes into his room with the stomach, as we see they have another superhero identity checked off their list. Barry Allen.

We end it with Dick reporting back to Bruce. He gives him an update on his mission, but they end it by bonding over an old memory that they shared together. Ending on a good note.