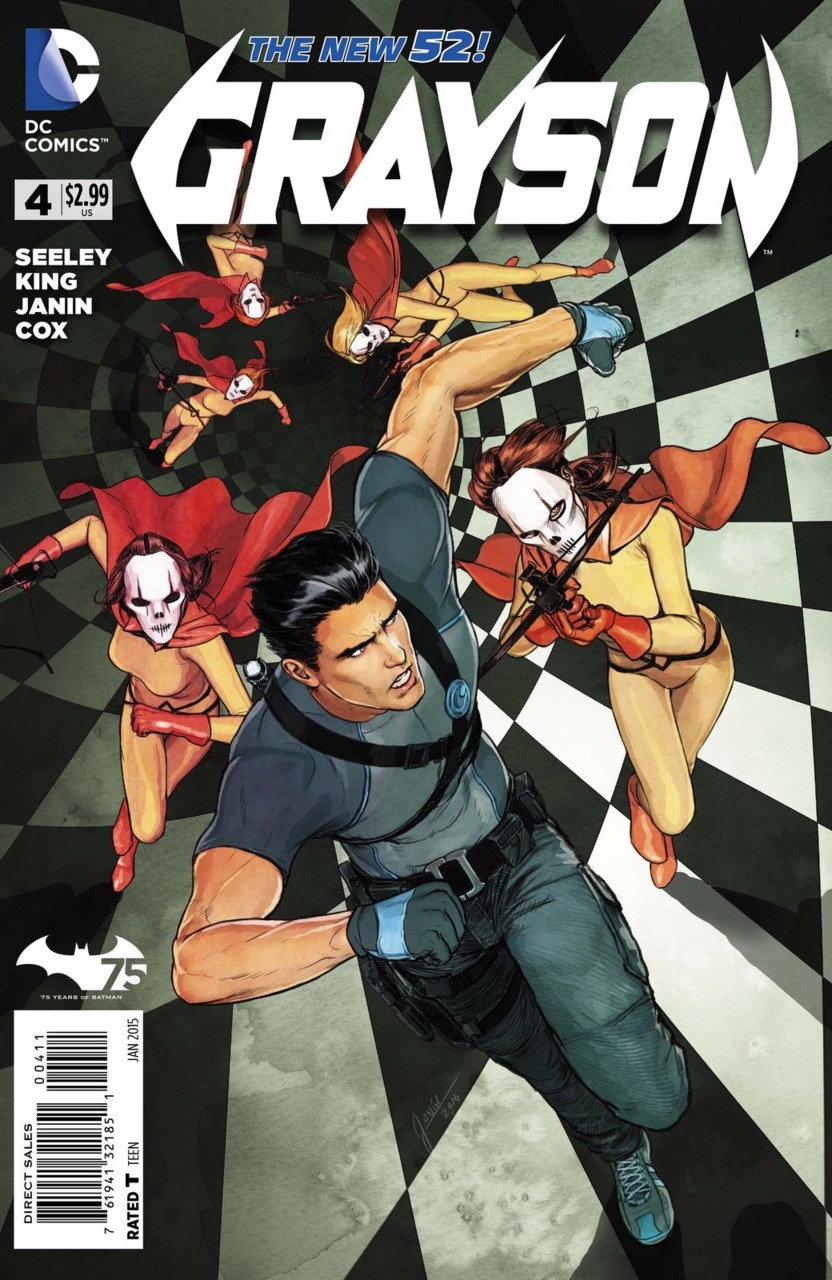 This issue opens with a seemingly bored Dick Grayson (Agent 37) listening to a briefing by the Spyral leader Mr. Minos…while annoyingly sucking on a sucker. Eventually Helena, who is also present, knocks the sucker from his mouth and later berates him for not paying attention. The two then depart on their mission to retrieve a hard drive from Checkmate, and they can be seen jumping out of some type of hovercraft onto their target below.

The scene then switches to St. Hadrian’s Finishing School where a group of young girls are in their dorm. After berating one another about eating candy and listening to music too loud, one of their friends arrive with some secret spy pictures of a shirtless Dick Grayson. The girls then decide to search the grounds for him.

Seemingly after the above mission was completed, Dick returns to his room at St. Hadrian’s and contacts Batman via his comlink and asks if he had received the package he had sent. Batman replies that he did indeed get the sucker that Dick had sent…it is revealed that Dick was attempting to retrieve Helena’s DNA for some unknown reason, but the conversation eventually steers into something more pressing. Batman has discovered that the sucker had also contained extremely miniscule nanites that are programmed to consume anything that sheds from Mr. Minos’ body…an extreme measure that seems to have both of them concerned. However, Penny Two interrupts them and Batman is called away into another adventure in “Batman Eternal.”

Finishing his conversation, Dick is attracted to noises out in the grounds and leaves to investigate. Helena meanwhile has been instructed by Minos to find the person secretly using their communications to talk with someone outside of Spyral.

Elsewhere, Dick appears to be having fun allowing the young girls to chase him around the grounds of St. Hadrian…always staying one step ahead of them. Helena suddenly shows up and sends the girls back to bed and informs Dick that Minos wishes to speak to him.

Back at Spyral, Minos informs Dick that he has discovered what he was doing and will be punished with an extreme torture…he then forces Dick to take on the guise of a former French Olympic gymnast, who also happens to be gay. It seems that the chase throughout the grounds has demonstrated how unprepared the students are, and Minos has assigned him the task to train the girls in acrobatics. Dick is then dismissed and Minos asks Helena whether she has discovered the identity of the person using their communications, Helena responds positively and identifies one of the girls and explains that she had setup a series of cameras to spy on the staff members.

In the final scene, we see Dick and Helena discussing Dick’s current situation…mainly in regards to Dick having to deal with his “death” after the Crime Syndicate unmasked him and how he truly loved being Nightwing. Playfully Helena jumps out the window and tells Dick to chase her.

Overall, some of this issue was interesting…and some of it was downright laughable (and not in a good way). In my opinion, this issue of Grayson is definitely the weakest of the series thus far. It starts off rather well with Minos sending Helena and Dick out on another assignment where they have to break into Checkmate…but then the plot jumps ahead without any warning or explanation. Clearly this was just a setup for the whole “Sucker Incident” that we see later.
It’s nice to see that Batman is still in contact with Dick and it was really cool to see the lengths at which Minos goes to in order to hide his identity.

Now, here’s where the issue starts to get ridiculous. A good chunk of this issue is dedicated to a bunch of young girls looking at pictures of a shirtless Dick Grayson, and then chasing him around the grounds…in which Dick still doesn’t have a shirt on. Really? I mean, the cover shows an interesting image of Dick being chased (with a shirt on I might add) by the girls who for some reason dress up in costumes with skull masks on….but seriously? This is what they decide to do…and it only leads to Dick having to act as an acrobatics teacher?! This is definitely something that I could have done without, I wasn’t aware that the reason Dick was “killed off” and sent into Spyral by Batman was to run around and have girls chase him…I understand that this was probably meant to be a fun issue, but it just came off rather lame.

The last point I’ll make pertains to the Helena storyline in this issue. I’m not sure if Helena is covering for Dick or not…we do see her searching Dick’s room after being told to find out who is communicating with someone outside Spyral, but then she tells Minos it was a student spying on the teachers. So I guess we will see if Helena really knows what’s going on or not.

Overall this issue was okay but unfortunately didn’t advance any of the main plots…except for figuring out the Minos has tiny little nanites eating his DNA. The artwork was probably one of the really good things in this issue, and had a couple good/interesting panels in regards to Dick and Helena jumping out of the hovercraft as well as the full map of the chase between Dick and the girls.