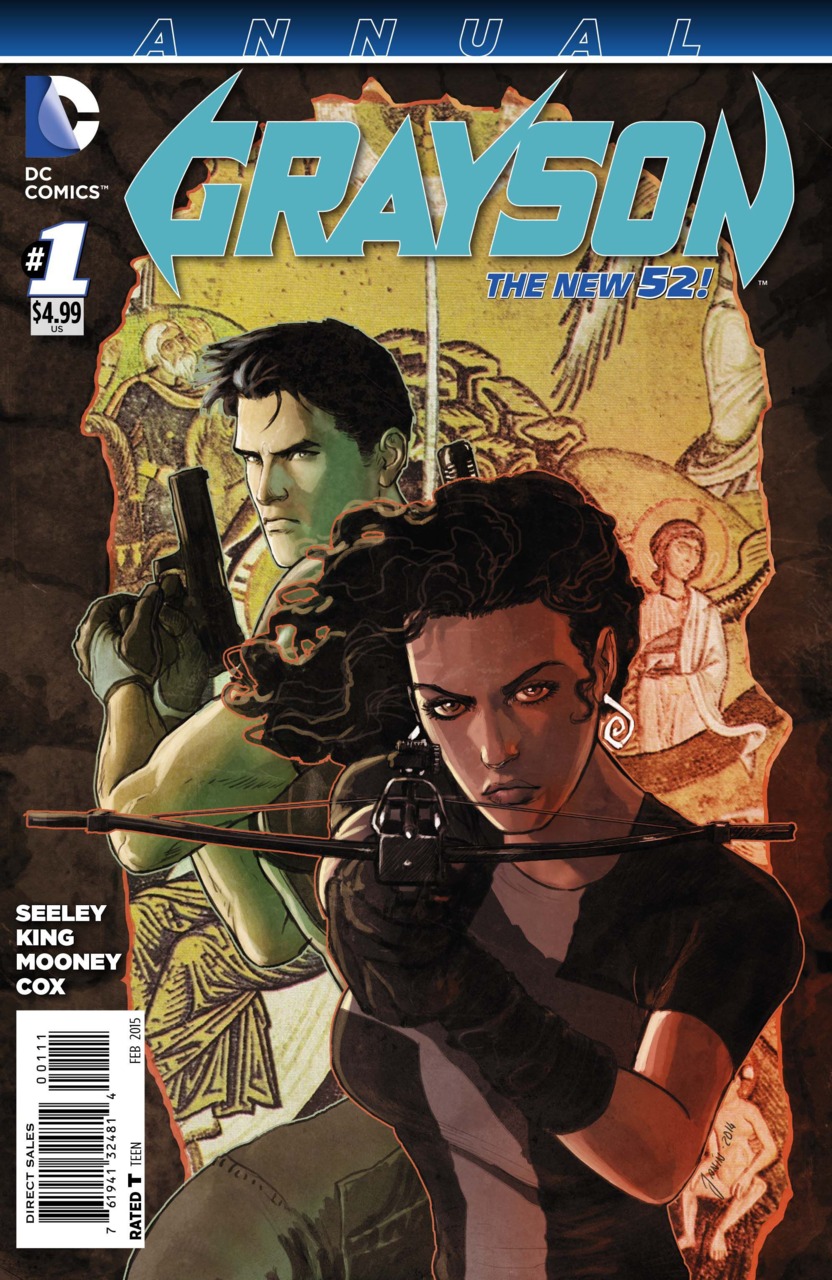 Our issue opens in Dublin, Ireland where we see two men walking down the street as one tells the other a story. The two men become identified as Rock and Paddy…we also discover that Rock is seeking an audience with a man named St. Francis and wants Paddy to confirm the identity of someone he has in his custody. Rock leads him to his car and opens the trunk to reveal a bound and gagged Helena Bertinelli.

The next day, Paddy is on the phone talking to one of his associates named Clare and lets her know that Rock does indeed have Helena. A few hours later, Paddy and Rock meet up with Clare to discuss the terms of handing Helena over to St. Francis as he has been searching for her. After some questioning, Rock tells the story of how he grew up and started making bombs for a living and eventually found his way to Gotham City where he wound up making a bomb for Professor Pyg…Rock was injured in an explosion when the bomb went off prematurely. He states that after his recovery (where some believed him killed) he came back home and started making bombs again for the extra cash…this is where he found Helena Bertinelli as she was a part of a group seeking Rock’s services. Rock explains that Helena was a member of Spyral that uses technology known as a hypnos to make them appear as someone else…everyone in the room believed she was the villain Cheshire, but due to Rock’s head trauma, the hypnos didn’t affect him. We are then treated to a bit of an origin for Helena, as we learn that Helena was the daughter of a powerful Italian mob boss but disappeared mysteriously. Rock also describes a bodyguard that was accompanying Helena who was being perceived as a man known as Headhunter (but in reality was Dick Grayson). Rock finishes his tale by telling Clare and Paddy that he got Helena and Dick outside where he shot Dick in the back and tasered Helena into submission.

Later that night, as final preparations are made to hand over Helena, Clare attempts to confirm Rock’s identity to ensure that they aren’t getting tricked in any way…she decides to call a contact of hers in Gotham: Matches Malone. Malone confirms Rock’s story and they proceed to setup a meeting.

The next day, the trio is on their way to meet with St. Francis and Paddy asks about the ending of the tale that Rock was telling him the other night…Rock goes on to tell how two ancient giants wanted to fight one another but one eventually backed down due to the size of the other. This giant, Fionn, ran all the way home and begged his wife to hide him from the other giant, Benandonner. His wife covered him in swaddling clothes and when Benandonner came to find him, she informed him that Fionn was not at home and he should leave as her “baby” was scared of him…Benandonner took one look at the giant “baby” and ran away thinking that if the “baby” was the size of a man, then his father must be truly terrifying. Paddy seems disappointed that the two giants never fought, but Rock replies that “any sheep-rattler can win with a fist…only we can win with a story.”

They eventually arrive at the location where they are set to meet St. Francis and they pull over as Rock pulls Helena from the trunk. Francis finally appears, hovering in the air and surrounded by a glowing, green aura. Rock persists that the deal for Helena needs to be closed with a handshake from Francis because, “once yeh shake hands with St. Francis…you can trust in him like yeh can trust in the Lord.” Francis extends his hand towards Rock who grasps it firmly…before suddenly punching across the jaw and knocking him out. Paddy and Clare quickly draw guns on Rock as he turns around and pulls off a mask revealing that he is none other than Dick Grayson! Helena rises from her bonds and pulls two guns on both Paddy and Clare and orders them to surrender. The two are eventually tied up as Helena decides to wipe Paddy and Clare’s memories using their hypnos…now that it is safe from St. Francis’ interference with his stolen Green Lantern skin. Helena comments that they have now acquired five Paragon parts and only two remain.

Some time later, we see that Clare is holding Paddy at gun point as she doesn’t remember the events of what happened. Paddy attempts to explain that they wiped her memory and for some reason did not end up wiping his…Clare explains that she can’t return to their group with this information and decides to put the blame on Paddy and forget that the Spyral agents were ever present. The issue closes when Clare shoots and kills Paddy.

I actually really enjoyed this issue…it seemed a little disappointing at first when Dick wasn’t really in the issue, but I soon realized (well before the actual reveal) that Dick was actually Rock in disguise.

I felt that the writing and storytelling in this issue got us back to how this series started out and was steeped in mystery. I liked that Helena and Dick were after this St. Francis character that seemed to have some ancient magic…but turned out to be stolen Green Lantern skin, at least I think it was Green Lantern…Helena actually quotes it as “GL” skin, but I feel I’m safe in my assumption as the green glow seems to confirm my hypothesis. I am really interested to see if the series goes anywhere with Paragon pieces that Spyral seems to be gathering…is this a reference to the heart that they were after in the previous issue when they were walking through the desert? Are they trying to assemble something to combat against the metahumans? Many questions asked and hopefully we will get some answers.

Additionally I enjoyed that we got to see a little bit of Helena’s back story confirmed…and that it is similar to her origin pre-New 52. Lastly I really liked the similiarities drawn between the story that “Rock” was telling about winning with a story…and that’s what occurred with Dick masquerading as Rock for the entire issue

Overall I was pleasantly surprised with this annual, and enjoyed that it didn’t further the story being told in the main series but helped to flesh out the world that Spyral inhabits.