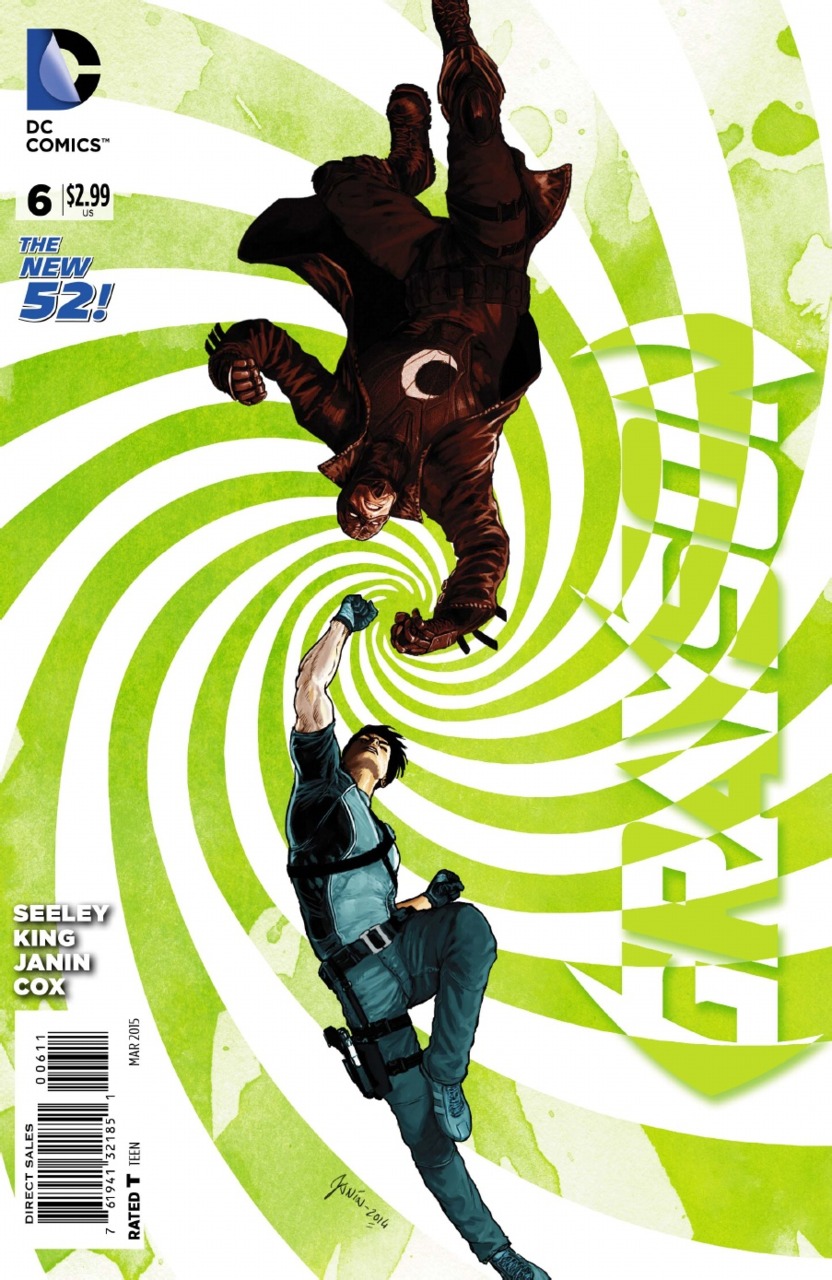 Our issue opens on the island of Gageo-Do where we see that Dick and Helena are combing their way through the terrain in search of the remains of a prison. The two are suddenly attacked by a mutant orca whale/giant insect, Helena quickly dispatches the monster and explains that the security nanocytes for the prison must still be active…but without human hosts it is taking control of whatever it comes into contact with. As the two come over a ridge, they look down on a barely standing prison site with dead bodies strewn everywhere.

As they begin to search through the bodies, Dick is suddenly grabbed by one of them and Helena quickly shoots it with her crossbow. Dick begins to extract the still alive person as Helena reports back to Spyral. We also see that Midnighter arrives and keeps his distance from the duo. After reporting to Mr. Minos, Helena begins to interrogate the man they found alive. It is revealed that Dick and Helena are in search of another piece of Paragon and are looking for its “brain.”

Meanwhile back at Spyral, we witness Minos talking to an unknown trio of beings that call itself Spyder. They explain they are only perceivable to the director of Spyral and that they “perceive only other others, all others, no matter how subtle, like a fly touching upon the threads of the web.” They insist that Minos is taking the current case too personally. Spyder offers to remove the memory that is causing him pain and Minos responds that he is fine…he signs off and reminds himself that he has given up his name and his face, all he has left of his former life is his pain.

We cut back to the island where Helena is busy interrogating the man they found. He reveals his name is Macabre and that he is a member of the Fist of Cain. Dick begins to wander around, making sure the place is secure when he is suddenly grabbed by Midnighter and pulled through some kind of portal. Midnighter welcomes Dick to the God Garden and the two engage in battle. As they are fighting, Midnighter reveals that after he found out who Dick really was, he studied all the footage he could find on Nightwing. He has memorized all his moves and begins to get the upper hand…however Dick soon counters that he may have studied Nightwing’s moves, but what about Robin? The tables soon turn and Midnighter crashes to the ground. As Dick stands above him he attempts to use his hypnos on him…but it seems that the God Garden has sometime taken his implants and given them to Midnighter instead.

We then cut back to Helena who has discovered that the Fist of Cain will be attempting to use the Paragon brain to induce a riot at a peace summit. She then reports back to Minos about what she has discovered.

Back in the God Garden, Midnighter once again has the upper hand against Dick. As he has Grayson cornered, Dick uses a subliminal command for the hypnos to create a mild shock to the users brain. Dick then knocks him out with a single punch. A woman suddenly appears behind Dick; she apologizes for her “son’s” actions and explains that she knows what Dick is after. It seems that Paragon was created from the discarded blood and skin of the “earthbound gods” and was created to destroy her. And now the Fist of Cain is attempting use it to murder thousands of people, Dick protests that he needs to leave to help but the woman reveals that she is the Gardner and he must remain with her to save the Garden.

Well this took a turn I wasn’t expecting. Although a tad mind confusing, I really liked this issue. Once again Dick and Helena are searching for pieces of Paragon…and we finally get an answer to who, or what, it is…sort of. Although it is still a mystery as to why Spyral wants to reassemble Paragon we do get some development with the Fist of Cain (who we saw Dick fighting against back in issue #1).

I liked the fight between Midnighter and Dick, and the banter was quite lovely to read…especially when Midnighter was getting cocky and arrogant about memorizing all of Nightwing’s moves, and then Dick counters with the random actions of Robin.

Meeting up with the Gardner was interesting, I’m not sure where this story is going to go now…and who exactly is this strange woman who seems to be orbiting the Earth in a space shift…at least I think it was Earth.

Overall a great issue that brought some light to the overall story and shed some answers onto characters like Minos and Midnighter.